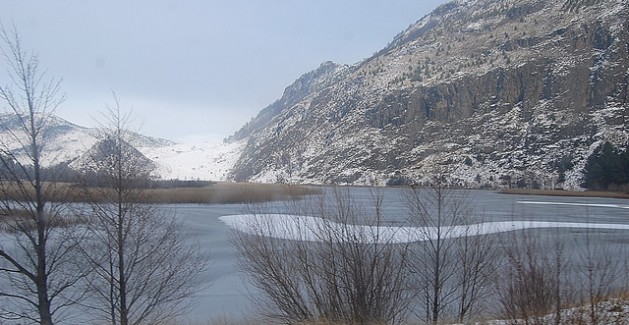 The Aysén region in Chile’s southern Patagonia wilderness has some of the largest freshwater reserves on the planet thanks to its swift-running rivers, innumerable lakes, and lagoons like the one in this picture, located 20 km from Coyhaique, the regional capital. Credit: Marianela Jarroud/IPS

COYHAIQUE, Chile , Aug 26 2014 (IPS) - After its victory in a nearly decade-long struggle against HidroAysén, a project that would have built five large hydroelectric dams on wilderness rivers, Chile’s Patagonia region is gearing up for a new battle: blocking a quiet attempt to build a dam on the Cuervo River.

The dam would be constructed in an unpopulated area near Yulton lake, in Aysén, Chile’s water-rich region in the south. The aim is to ease the energy shortage that has plagued this country for decades and has prompted an accelerated effort to diversify the energy mix and boost the electricity supply.

However, the Cuervo River project is “much less viable than HidroAysén, because of environmental and technical reasons and risks,” Peter Hartmann, coordinator of the Aysén Life Reserve citizen coalition, told Tierramérica, expressing the view widely shared by environmentalists in the region.

The big concern of opponents to the new hydroelectric initiative is that it could be approved as a sort of bargaining chip, after the government of socialist President Michelle Bachelet cancelled HidroAysén on Jun. 10.

Endorsement of the Cuervo River dam will also be favoured by an Aug. 21 court ruling that gave the project a boost.

The Cuervo Hydroelectric Plant Project is being developed by Energía Austral, a joint venture of the Swiss firm Glencore and Australia’s Origin Energy. It would be built at the headwaters of the Cuervo River, some 45 km from the city of Puerto Aysén, the second-largest city in the region after Coyhaique, the capital.

It would generate a total of approximately 640 MW, with the potential to reduce the annual emissions of the Sistema Interconectado Central de Chile (SIC) – the central power grid – by around 1.5 million tons of carbon dioxide.

In 2007, the regional commission on the environment rejected an initial environmental impact study presented by the company.

Two years later, Energía Austral introduced a new environmental impact study, for the construction of a hydropower complex that would include two more dams: a 360-MW plant on the Blanco River and a 54-MW plant on Lake Cóndor, to be built after the Cuervo River plant.

“Cuervo appeared when HidroAysén was at its zenith, and the Cuervo River dam was a second priority for the Patagonia Without Dams campaign,” said Hartmann, who is also the regional director of the National Committee for the Defence of Flora and Fauna (CODEFF).

“In the beginning there was diligent monitoring of the project, from the legal sphere, but we ran out of funds and the entire focus shifted to HidroAysén as the top priority, and not Cuervo,” he added.

According to the experts, the Cuervo River plant would pose more than just an environmental risk, because it would be built on the Liquiñe-Ofqui geological fault zone, an area of active volcanoes.

For example, a minor eruption of the Hudson volcano in October 2011 prompted a red alert and mass evacuation of the surrounding areas. Mount Hudson is located “right behind the area where the Blanco River plant would be built,” Hartmann said.

“Energía Austral is doing everything possible not to mention the Hudson volcano, because it knows what it’s getting involved in,” he added.

In response to such concerns, the company has insisted that the plant “will be safe with regard to natural phenomena like earthquakes and volcanic eruptions.” It adds that “the presence of geological fault lines is not exclusive to the Cuervo River.”

It also argues that in Chile and around the world many plants have been built on geological fault lines or near volcanoes, and have operated normally even after a seismic event.

The national authorities approved the construction of the Cuervo dam in 2013. But shortly afterwards the Supreme Court accepted a plea presented by environmental and citizen organisations to protect the area where it is to be built, and ordered a thorough study of the risks posed by construction of the plant.

However, on Aug. 21 the Court ratified, in a unanimous ruling, the environmental permits that the authorities had granted for construction of the dam. The verdict paves the way for final approval by the government, which would balance out its rejection of HidroAysén.

“The state is not neutral with respect to energy production; we are interested in seeing projects go forward that would help us overcome our infrastructure deficit,” Energy Minister Máximo Pacheco said in June.

And in July he stated that “Chile cannot feel comfortable while hydroelectricity makes up such a small share of our energy mix, given that it is a clean source of energy that is abundant in our country.”

Chile has an installed capacity of approximately 17,000 MW, 74 percent in the SIC central grid, 25 percent in the northern grid – the Sistema Interconectado Norte Grande – and less than one percent in the medium-sized grids of the Aysén and Magallanes regions in the south.

According to the Energy Ministry, demand for electricity in Chile will climb to 100,000 MW by 2020. An additional 8,000 MW of installed capacity will be needed to meet that demand.
Chile imports 60 percent of the primary energy that it consumes. Hydropower makes up 40 percent of the energy mix, which is dependent on highly polluting fossil fuels that drive thermal power stations for the rest.

Currently, 62 percent of the new energy plants under construction are thermal power stations. And 92 percent of those will be coal-fired.

Regional Energy Secretary Juan Antonio Bijit told Tierramérica that independently of Aysén’s enormous hydropower potential, “if we analyse the energy mix, it is highly dependent on thermal power, so the most logical thing would appear to be to increase supply in the area of hydroelectricity.”

He said the Aysén region “currently produces around 40 MW of energy, which only covers domestic consumption.”

But, he said, “we have significant potential” in terms of hydroelectricity as well as wind and solar power.

“The region’s capacity for electricity generation is quite strong,” he said. “However, we have to study how we will generate power, and for what uses.”

Bijit said the region’s contribution of energy to the rest of the country “should be analysed together with the community.”

“We can’t do things behind closed doors; we have to talk to the people,” he said. “That was done in a workshop prior to the decision reached on HidroAysén and now we are doing it with the Energía Austral project and others,” he said.

“The idea is that the people should be participants in what is being done or should be done in the field of energy,” he added.