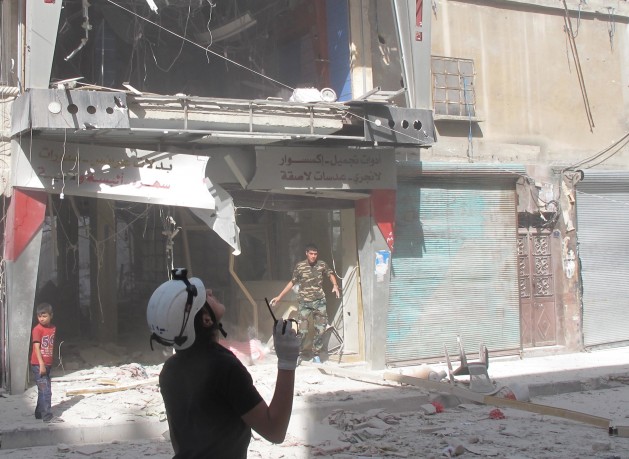 Greyish dust blankets the dead, the alive and the twisted steel jutting out.  The panicked confusion immortalised in innumerable photos – with bloodied survivors raking desperately through the rubble for loved ones – is granted a modicum of order by the arrival of the rescue teams, in their distinctive white hard hats and black knee pads and boots.

When IPS arrived on the scene a few moments after the explosion of one such barrel bomb in early August, the men were already there, looking for survivors amid the rubble. One stood ready ear glued to his walkie-talkie, eyes darting between onlookers he was trying to keep at a safe distance and the sky – the first barrel bomb is almost always followed by another within 10-30 minutes, targeting would-be rescuers.

One [rescue worker] stood ready, ear glued to his walkie-talkie, eyes darting between onlookers he was trying to keep at a safe distance and the sky – the first barrel bomb is almost always followed by another within 10-30 minutes, targeting would-be rescuers

The Hanano civil defence centre in eastern Aleppo is a repurposed school, its corridors dusty and empty except for a few firemen’s boots airing out, a broom, and a few morale-boosting posters of the civil defence men in uniform.

Body bags and trauma kits sit alongside fuel for Bobcat excavating and rubble-clearing equipment, pickaxes with USAID logos on them, drills and boxes of firemen’s suits, propped up against chalkboards still bearing the marks of lessons once taught in them.

Many of the men are in their twenties, clean-shaven, former university students. Khaled Hijjo, a former law student in his mid-twenties and head of the centre, told IPS that the rescue and fire teams work in two shifts: 12 hours on, 12 hours off.

At the moment there is only one medical specialist at the centre, he said, so this specialist is on call 24 hours a day. The man, who did not give his name, said he had worked for the Syrian Red Crescent even prior to the 2011 uprising and subsequent violence, but that he had no time to train the other men in basic first aid.

Correct carry and extraction procedures prevent aggravating injuries, including paralysing spinal injuries, and the heavy equipment received has proven vital to remove rubble and save those trapped underneath.

For the past four months, the rescue workers have been receiving a salary from the government-in-exile and courses from a number of foreign bodies and governments.

Entry-level first responders are given a salary of 175 dollars, while the heads of the various centres instead receive 200, civil defence chief and former English teacher Ammar Salmo told IPS, adding that 21 members of the team had been killed by barrel bombs while on duty.

When the bombs bring down entire buildings, ‘’many are trapped and nothing can be done. There are five still alive in one area that we know of, but there is no way to get them out’’, one local media activist told IPS, saying he felt helpless, and that taking pictures of the dead and wounded had ceased to make him feel useful

Though many of the local media activists have been given expensive cameras and satellite equipment and attended training programmes funded by Western nations in southern Turkey, virtually none of them seem to have had any basic first aid training.

Given the extremely severe shortage of trained medical staff left in Aleppo after the repeated attacking of medical facilities by the regime, the civil defence teams play an even more vital role in saving lives.

Ambulances donated from abroad and brought in through the sole supply road still under rebel control into the city go with the first responder team in central Aleppo, while those injured in the surrounding countryside are taken in cars to the nearest first aid centre. Communication is possible only via walkie-talkie, because there is no mobile phone reception.

A training centre was recently established inside Syrian territory but outside of the city, where team members were attending 20-day training sessions a few at a time, said Salmo.

He added that more civil defence centres were currently being set up in the Idlib region further to the west, and that it was proving easier to manage them than those in Aleppo, because many of the men ‘’were regime defectors and are more familiar with how institutions work.’’

He said the deputy chief of civil defence was a former regime general, and that four other former generals are currently working with them.

Of the instructors at the training centre, Salmo told IPS,  ‘’five are defectors from Assad’s forces, including a general teaching how to deal with barrel bombs and fire, and two doctors serve as medical experts to train the men in first aid.’’

The group has experienced some minor problems with some of the armed groups. One team member also told IPS that some of the heavy equipment had been ‘’borrowed’’ for a day by a Free Syrian Army group a few weeks earlier, but that they had promised that they would return it soon.

‘’We’re trying to solve the matter through dialogue,’’ he said.

When asked whether the group had had problems with the more extremist groups such as the Al-Qaeda affiliate Jabhat Al-Nusra, he scoffed, saying ‘’Jabhat Al-Nusra doesn’t need our things. They already have enough money.’’

No fire engines or other emergency vehicles could be seen in the immediate vicinity of a civil defence centre near a front line where IPS spoke to Salmo, who said that the teams had to be careful.