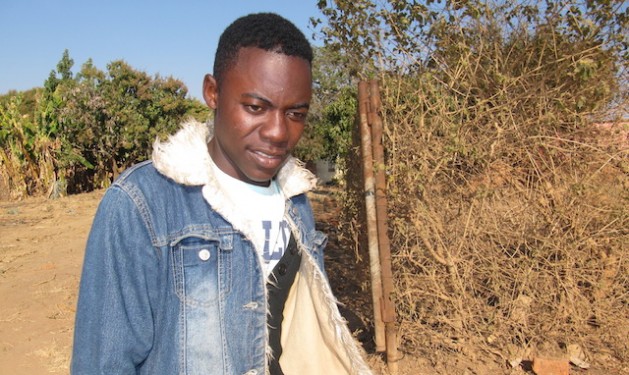 Allens Malambo, an orphan from Pemba in southern Zambia is a beneficiary of the government-run Social Cash Protection Scheme. Credit: Friday Phiri/IPS

PEMBA DISTRICT, Zambia, Aug 21 2014 (IPS) - “Last season, I lost an entire hectare of groundnuts because of a prolonged drought. Groundnuts are my hope for income,” says Josephine Chaaba, 60, from Pemba district in southern Zambia.

A widow since 2002, Chaaba’s story is not unique in this part of Zambia.

Here, in what the Zambia Meteorological Department classifies as a region characterised by low rainfall, most families are entirely dependent on agriculture and have gone through similar hardships.

But when these disasters strike, families have proven resilient and are finding ways to cope.

“The rainfall pattern has been getting erratic with each passing season, and as a widow I decided to start a small business of selling tomatoes and vegetables to sustain my family,” Chaaba, who looks after her 17-year-old son and two grandchildren, tells IPS.

But with only a working capital of 200 Zambian Kwacha (about 35 dollars), Chaaba had to seek assistance from the government-run Social Cash Protection Scheme. Josephine Chaaba, a widow who looks after her son and two grandchildren, is a beneficiary of Zambia’s social protection grant. Courtesy: Friday Phiri

Stella Kapumo of the Social Welfare Department in Pemba district explains that “there are three schemes under which our department gives support to the vulnerable in the community.”

“The Public Welfare Assistance Scheme is where material support such as shelter and food aid are given, and there are two cash protection schemes – a social cash transfer and a social protection fund,” Kapumo tells IPS.

According to Kapumo, the cash transfer is a bi-monthly cash allowance of 25 and 50 dollars respectively for vulnerable households and households where there are people with disabilities. The social protection fund is a once-off grant of up to 670 dollars for viable business proposals.

“The cash schemes are the most popular and have proven to be a powerful relief to the socio-economic challenges of the vulnerable communities where they are being implemented.

“However, here in Pemba we are implementing the ‘social protection fund’  where we give cash grants targeting vulnerable families to either boost and/or venture into viable businesses,” Kapumo says.

Piloted in 2003 in Kalomo district, southern Zambia, the social cash transfer has expanded to 50 districts currently providing social protection to about 60,000 vulnerable households.

“I benefited from a grant of 1,500 Zambian Kwacha [250 dollars] to boost my business. I have since added fish to selling tomatoes and vegetables.

“I just have to work extra hard to grow my capital and then school fees will no longer be a problem. I am thankful to the government for this scheme,” Chaaba says cheerfully, adding that she would not be too worried if she were to suffer another crop failure in the near future as she now has an alternative livelihood.

Communities in Zambia that rely on agriculture for their livelihoods are already suffering the consequences of climate change due to their limited resource capacity to adapt.

But stakeholders here are still searching for adaptation options that can be brought within reach of the rural poor.

And social protection may be the key.

Mutale Wakunuma, Zambia coordinator of the Africa Platform for Social Protection, who has witnessed the positive impact of the Social Cash Protection Scheme across the country, believes the strategy is a key step towards transformation and climate change adaptation.

“We believe cash transfers offer flexibility to beneficiaries as compared to food aid or agricultural inputs, and we are encouraging people working on climate change adaptation to consider cash transfers as a coping strategy,” Wakunuma tells IPS.

As government targets to reach over 390,000 households by 2015 through its social cash transfer schemes, it is expected that social protection could become a major socio-economic intervention for the most vulnerable communities in Zambia.

Wakunuma, however, cautions that the social cash transfer is not a holistic social protection strategy when it comes climate change adaptation, although it plays a “significant role in cushioning climate shocks.”

Robson Nyirenda, the training and extension coordinator at Kasisi Agricultural Training Centre, argues for a knowledge-based approach in the fight against socio-economic challenges.

“We believe knowledge is sustainable and lasts a lifetime. However, we cannot run away from the fact that some people are more vulnerable and require assistance in form of cash or food aid for them to survive,” Nyirenda tells IPS.

“On our part, we have continued teaching farmers climate change adaptation through sustainable farming methods in our role to compliment government efforts in empowering vulnerable communities.”

Wakunuma tells IPS, “the role of social protection cannot be overemphasised but it has to be implemented with the seriousness it deserves.”

And 22-year-old Allens Malambo, an orphan from Pemba and a beneficiary of the social protection grant, agrees.

“For the past two seasons, we have had poor yields due to poor rainfall and it has been a struggle for me and my six siblings,” Malambo tells IPS.

“At 64, grandma has no energy to sustain us. But with this money, I am determined to achieve my dream of getting into college and I urge the government to invest more and help more young people, the majority of whom are unemployed,” he says of the 420 dollars he was awarded to support his poultry business.

The writer can be contacted on fphiri200@gmail.com