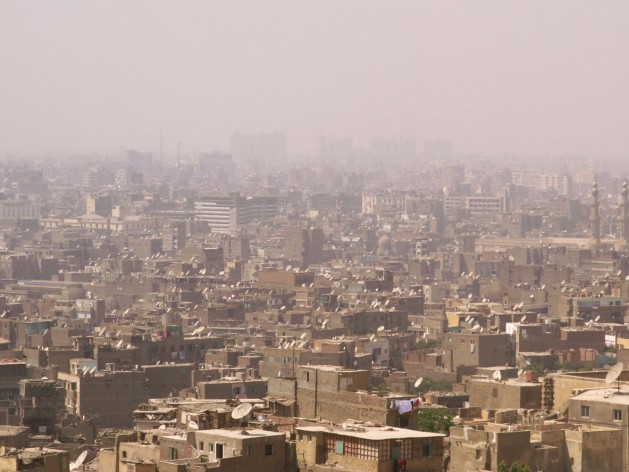 PARIS, Sep 17 2014 (IPS) - If former New York mayor Michael Bloomberg had used the Vélib’ – Paris’ public bicycle sharing system – to arrive at the headquarters of the Organisation for Economic Cooperation and Development here Wednesday, he might have sent a stronger message about the need for cities to be “empowered to take the lead in combating climate change”.

Yet, despite arriving by car, Bloomberg, the United Nations Special Envoy for Cities and Climate Change, spoke persuasively about how efficient environmental policies at local level can lead to a reduction in greenhouse gas emissions.

A key step is to make populations more aware of the issues by sending the right message, so that voters can make informed decisions, Bloomberg said during an open “discussion” with OECD Secretary-General Angel Gurría.

For example, if people saw an image of a baby on television with “two or three cigarettes dangling out of his or her mouth” and understood that as a symbol of the polluted air that they were breathing in their city, or the air that their children would breathe, the message would hit home, said Bloomberg, the founder and principal owner of the international media company that bears his name.

If people saw an image of a baby on television with ‘two or three cigarettes dangling out of his or her mouth’ and understood that as a symbol of the polluted air that they were breathing in their city, or the air that their children would breathe, the message would hit home – Michael Bloomberg, former mayor of New York

At the meeting, Bloomberg and Gurría “reaffirmed their commitment to support international cities’ efforts to lead in the global fight against climate change” and urged governments to adopt policies to achieve this.

Their pledge ties in with the former mayor’s current role: UN Secretary-General Ban Ki-moon appointed Bloomberg as a special envoy in January to assist him in “consultations with mayors and related key stakeholders in order to raise political will and mobilise action among cities as part of his long-term strategy to advance efforts on climate change”.

This assistance includes “bringing concrete solutions” to the 2014 Climate Summit that the UN Secretary-General will host in New York on Sep. 23.

However, many non-governmental organisations regard this Summit as a gathering where world leaders will once again be “fiddling with flimsy pledges instead of committing to binding carbon reductions”, according to environmental group Friends of the Earth.

“A parade of leaders trying to make themselves look good does not bring us any closer to the real action we need to address the climate crisis. This one-day Summit will not deliver any substantial action in the fight against climate change,” said Dipti Bhatnagar, climate justice and energy coordinator for Friends of the Earth International (FoEI).

“World leaders are falling far short of delivering what we need to truly tackle climate change in a just way. Their flimsy non-binding pledges in New York will do little to improve their track record. What we urgently need are equitable and binding carbon reductions, not flimsy voluntary ones,” she said in a statement.

Friends of the Earth will join with thousands of protesters on Sep. 21 to march in New York, Paris, London and several other cities around the world to “demand climate justice, standing with climate and dirty energy-affected communities worldwide”, the group said.

Some of the cities where the demonstrations will occur have already taken steps to reduce emissions and improve the quality of life for residents, as Bloomberg pointed out in Paris. But political awareness needs to be heightened so that special interest groups are not the ones imposing directions, the former mayor said.

Over three consecutive terms as mayor of New York, where he reportedly spent 268 million dollars of his own money on election campaigns, Bloomberg set up schemes to make New York “greener”, including recycling food waste and aiming at converting organic waste to biogas.

For Bloomberg and Gurría, cities are a” crucial part of efforts to slow climate change” because urban areas produce more than two-thirds of the world’s carbon emissions. The share of the global population living in cities is also set to increase to 70 percent, or 6.4 billion people, by 2050 from the current roughly 50 percent, says the OECD.

“Cities have the potential to make a great difference in the global effort to confront climate change: they account for more than 70 percent of global greenhouse gas emissions and two-thirds of the world’s energy use today,” according to Bloomberg and Gurría.

“Mayors have, within their authorities, many ways to reduce emissions, change the way energy is consumed, and prepare for the impacts of climate change,” they added.

Both men called on world leaders gathering at the UN Climate Summit to “look for ways to help their cities accelerate their progress and empower them to do even more.”

“We are all aware of the immense scale of the global challenge presented by climate change,” Gurría said. “It is no longer simply an environmental issue. It is an economic and a social issue. It is vital to our quality of life and to the life of our fragile earth. Action is becoming ever-more urgent.”

The OECD and Bloomberg Philanthropies also issued a “Policy Perspectives” document Wednesday that recommends measures for enabling cities to fight global warming. The recommendations include actively involving the private sector because “green” policies cannot be separated from economic growth, according to Gurría.

He said that various sectors needed to work together to “enable real progress in reaching international climate goals and a meaningful, global agreement next year in Paris,” where the 2015 UN Climate Change Conference will take place.

Friends of the Earth and many other NGOs remain unconvinced, however, of the commitment by wealthy nations such as those that are members of the OECD. The group said that the positions of developed countries’ leaders “are increasingly driven by the narrow economic and financial interests of wealthy elites, the fossil fuel industry and multinational corporations.”