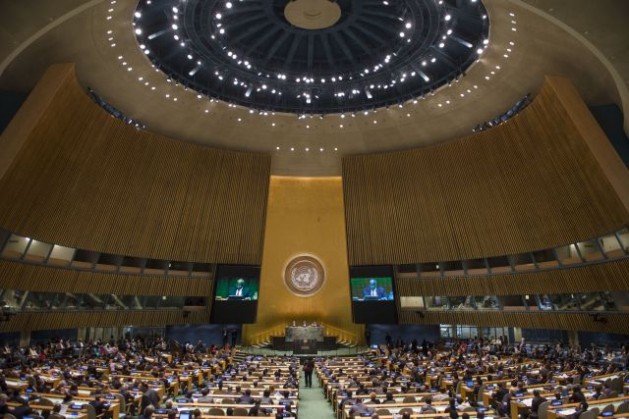 A wide view of the General Assembly Hall as Sam Kahamba Kutesa (shown on screens), President of the sixty-ninth session of the Assembly, addresses the first plenary meeting of the session on Sep. 16, 2014. Credit: UN Photo/Amanda Voisard

UNITED NATIONS, Sep 22 2014 (IPS) - As the 69th session of the General Assembly took off with the usual political pageantry, the United Nations will be hosting as many as seven “high-level meetings”, “summits” and “special sessions” compressed into a single week – the largest number in living memory.

The agenda includes a world conference on indigenous peoples; a special session on the 20th anniversary of the 1994 International Conference on Population and Development; a climate summit; and a Security Council meeting of world leaders on counter-terrorism presided over by U.S. President Barack Obama.

"We will see this on full display in the coming days: gatherings that are symptomatic but that make little progress, gatherings that may drive forward the very policies that are fueling the crisis." -- James Paul

All of this in a tightly-packed five-day political extravaganza ending Friday, which also includes an address by U.S. First Lady Michelle Obama at the GEFI meeting.

“This is going to be one of the largest, biggest gatherings of world leaders, particularly when it comes to climate change,” he said.

Still, neither the General Assembly nor the Security Council has seen fit to summon a special session or a summit meeting of world leaders on the widespread crises that have resulted in hundreds of thousands killed and millions reduced to the status of refugees: in Syria, Palestine, Iraq, Afghanistan, Ukraine, Central African Republic and the Democratic Republic of Congo.

Perhaps the easy way out was to focus merely on counter-terrorism instead of directly engaging Iraq or Syria.

The primary reason for avoiding these crises is the sharp division of opinion among the 193 member states in the General Assembly and a virtual Cold War confrontation between veto-wielding Russia and the United States in the 15-member Security Council, with China supporting the Russians.

James Paul, a former founding executive director of the New York based Global Policy Forum, told IPS: “The U.N.’s unprecedented number of global policy events in the coming days reflects the parlous state of the planet and the fear among those at the top that things are coming apart.”

He said terrorism, the climate crisis, Ebola outbreak, population pushing towards nine billion – these are signs the globalised society once so proudly announced is coming unstuck.

“Lurking in the background are other dangers: the persistent economic crisis, the problems of governability, and the rising tide of migration that are destabilising political regimes everywhere,” said Paul, who has been monitoring and writing extensively on the politics and policy-making at the United Nations since 1993.

Despite some star-studded attendees at the General Assembly sessions this year, there are a couple of high-profile world leaders who will be conspicuous by their absence.

Asked about the non-starters, the secretary-general said: “But, in any event, we have other means of communications, ways and means of having their leadership demonstrated in the United Nations.”

And so it’s extremely difficult to have at one day at one time at one place 120 heads of state in government, he said, in an attempt to justify the absentee leaders.

“In that case,” said a Wall Street Journal editorial rather sarcastically, “why not do a conference call?” of all world leaders.

The editorial also pointed out “the Chinese economy has been the number one global producer of carbon dioxide since 2008, but President Xi Jinping won’t be gracing the U.N. with his presence.”

Paul told IPS since the problems facing the international community are global in scope, everyone realises they must be addressed globally, hence the turn towards the United Nations.

“But the powerful countries are uncomfortable with the U.N. even as they seek to impose their own global solutions,” he said.

So there is the paradox of global crises and global conversations, without effective global governance. Democracy is definitely off the table, said Paul, whose honours include the World Hunger Media Award and a “Peacemaker” award by Nuclear Age Peace Foundation.

Above all, he said, the business leaders of the Global Compact, will be gathering to “bluewash” their companies and to declare their commitment to a better world while promoting a neoliberal society of weak governance and the invisible hand.

“They will be waltzing in dreamland. Please pour another champagne,” Paul declared.