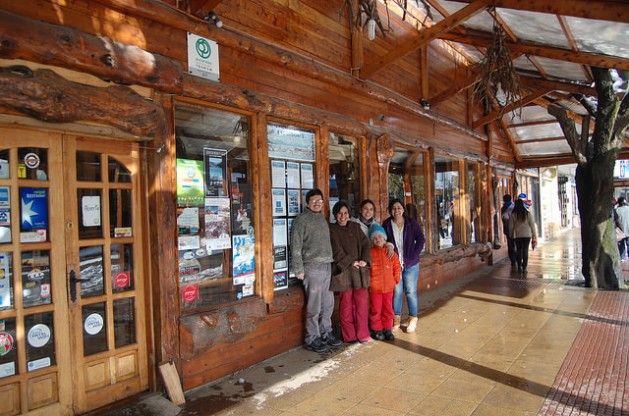 Miriam Chible, second on the left, with her partner Patricio Segura, two of her daughters and one of her grandchildren outside the door of her restaurant in Coyhaique, in Chile’s Patagonia region, where she puts into practice her objectives of sustainable locally-based development. Credit: Marianela Jarroud/IPS

COYHAIQUE, Chile , Sep 4 2014 (IPS) - In few places in Chile are women the pillars of community, grassroots rural and environmental movements as they are in the southern wilderness region of Patagonia. It is a social role that history forced them to assume in this remote part of the country.

“Patagonian women had to give birth without hospitals, they had to raise their children when this territory was inhospitable,” social activist Claudia Torres told IPS. “And they also had to take on the responsibility of the social organisation of the communities that began to emerge.”

“The men worked with livestock or in logging and they would leave twice a year for four or five months at a time. So the women got used to organising themselves and not depending on men, in case they didn’t come back.”

Women in this region not only raise their families and run the household but also shoulder the tasks of producing and managing food and natural resources – raising livestock, growing and selling fruit and vegetables, collecting firewood – used to heat homes and cook – and making and selling crafts.

According to Torres, “70 or 80 percent of community, grassroots rural and environmental leaders and activists” are women, who were the core of the month-long mass protests that broke out in Aysén in 2012, posing a major challenge to the government of rightwing President Sebastián Piñera (2010-2014).
The Aysén uprising began on Feb. 18, 2012, after months of demands for better support for development in this isolated region and subsidies for the high cost of living in an area lacking in infrastructure and subject to low temperatures and inclement weather.

“This is a region of enterprising women who are seeking a development model on a human scale, focused on an appreciation of the binational culture that we share with Argentine Patagonia, and on our own kind of development that puts a priority on the use of local raw materials.” -- Miriam Chible

“There were nights when it seemed like we were in a war,” said Torres, who helped reveal, in her programme on the Santa María radio station, the harsh crackdowns on the demonstrators in Coyhaique and Puerto Aysén, the second-largest city in the region.

For 45 days Torres broadcast coverage, night and day, on what was happening in the region. “There were accounts from people who were beaten, shot, arrested, women who were stripped naked in front of male police officers,” she said.

In her coverage of the protests, Torres saw local women taking on a central role in the demonstrations against the central government’s neglect of the region.

“It was women who were leading the roadblocks, organising the marches, the canteen, the resistance, caring for the injured,” she said. She was referring to the movement brought to an end by the government’s promise to listen to the region’s demands – although two and a half years later, “it has only lived up to 15 percent of what was agreed.”

The 40-year-old Torres, who studied design and tourism, started to work in the media in Caleta Tortel, the southernmost town in Aysén. She worked at a community radio station there, but her opposition to the HidroAysén project, which would have built five enormous hydropower dams on wilderness rivers in Patagonia, forced her into “exile”.

“We were activists, and we produced a programme informing people about Endesa [the Italian-Spanish company that was going to build the dams] and reporting on dams in other parts of Chile and the world. But it had political costs and I lost my job. I came back to Coyhaique without work, without anything,” said the married mother of two.

Torres, who describes herself as “Patagonian, messy, foul-mouthed, disheveled, ugly and happy,” continued the struggle against the dams and is now on the Patagonia Defence Council, which finally won the fight against HidroAysén when the government of socialist President Michelle Bachelet cancelled the project on Jun. 10.

Now Torres is the owner of a gift shop and forms part of the Aysén Life Reserve project, focused on achieving sustainable development in the region by capitalising on its wild beauty and untrammeled wilderness by preserving rather than destroying it.

Mirtha Sánchez, a 65-year-old obstinate smoker, told IPS that life here is better now than when she was a little girl.

“I was five years old when I came to Coyhaique to live, and then I moved with my mother to Puerto Aysén, where she opened a boarding house that catered to workers,” Sánchez, who sees the strong role played by Patagonian women as a regional trademark, told IPS.

A decade ago she sold her business in Puerto Aysén and moved back to Coyhaique. She now runs a hostel that only brings in income in certain seasons.

“I thought it would be more restful, but it wasn’t,” she complained. “This region has changed radically. The nouveau riche, with created interests, have arrived,” she added, refusing to elaborate.

She defends the 1973-1990 military dictatorship of General Augusto Pinochet), saying “Aysén started to improve in that period, and it has gone downhill in recent years.”

Miriam Chible, 58, disagrees with that assessment. She believes the region “has only good things to offer.”

Chible is an example of Patagonia’s women leaders. She told IPS that when she was widowed, she and her four children successfully ran a restaurant that is not only the leading eatery today in Coyhaique but is also an example of sustainable development.

She works tirelessly for the region to achieve energy and food sovereignty, forms part of the Presidential Advisory Commission for Regional Development and Decentralisation established by Bachelet in May, and participates in initiatives to create a model of alternative economic development for Aysén.

“I’m not an expert in anything, but I care, I’m an involved citizen,” said Chible. Her new partner is also a social activist, who goes around the country drumming up support for Aysén’s demands for respect for its right to development free of invasive and destructive projects.

“Sometimes people ask me ‘how’s your issue going, the dam thing?’ and they’re wrong, because it’s not ‘my issue’. Excessive industrialisation in the region of Aysén will hurt us all, which is why we have to fight to stop it,” she said.

Her three daughters and one son share the work of purchasing food, serving the tables, and running the restaurant. One of her daughters also manages a small ski rental and tour business.

The hard work has borne fruit: the ‘Histórico Ricer’ restaurant is one of the best-known businesses in the region, and its quality locally-based products are celebrated by locals and outsiders alike.

“This is a region of enterprising women,” said Chible, “women who are seeking a development model on a human scale, focused on an appreciation of the binational culture that we share with Argentine Patagonia, and on our own kind of development that puts a priority on the use of local raw materials.”

“That’s what we’re working towards, and that’s where we’re headed,” she said.