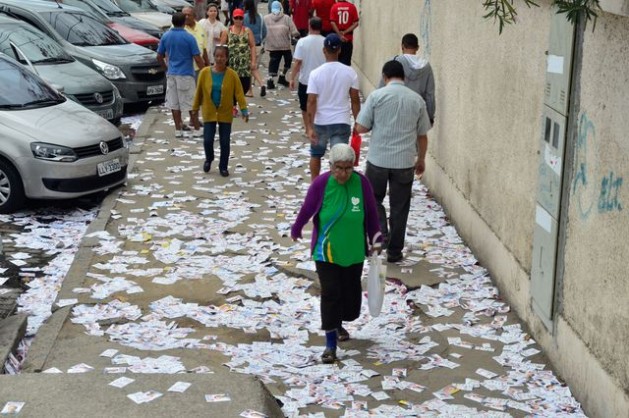 Post-election garbage outside a voting station in a populous neighbourhood of Rio de Janeiro, a day after the first round of Brazil’s presidential elections – a metaphor for the dirty campaign. Credit: Tânia Rêgo/Agência Brasil

RIO DE JANEIRO, Oct 7 2014 (IPS) - The dream of electing Brazil’s first black president, an environmental activist from the Amazon jungle, lasted only 40 days and was frustrated in Sunday’s elections. In the end, it is the two parties that have dominated Brazilian politics for the last 20 years that will face off in the second round of voting on Oct. 26.

Former environment minister Marina Silva, who was briefly the frontrunner in the polls after she was named presidential candidate by the Brazilian Socialist Party (PSB) on Aug. 16, saw her popularity plunge in the last three weeks. She came in third, with 21 percent of the vote.

Aecio Neves of the Brazilian Social Democracy Party (PSDB), which governed Brazil from 1995 to 2003 under former president Fernando Henrique Cardoso, and President Dilma Rousseff of the Workers’ Party (PT), garnered 33.5 and 41.6 percent of the vote, respectively.

If projections are borne out, the economy will be the central focus of the new campaign, which will be the sixth time since 1994 that the PSDB and the PT, both of which have a social democratic orientation, face off at the polls.

But in elections characterised by sudden shifts, such as Silva’s rise and fall, a new surprise could come from a scandal at Brazil’s state-run oil giant Petrobras, involving billions of dollars in kickbacks over the last decade.

During part of that period, Rousseff chaired the Petrobras board.

The investigation is in the hands of the police and the legal authorities. But the names of some politicians and companies implicated in the scandal have been leaked to the press.

The fear, especially in the government, is that other information will come to light.

The opposition criticises the current administration for what it calls errors in the management of the economy, which it says have led to the current stagnation, high inflation, fiscal deterioration and imbalances in the external accounts.

But Rousseff, for her part, can point to the low unemployment rate – just five percent in August – the result of the generation of millions of jobs during the nearly 12 years of PT government, as well as the progress made in income distribution and poverty reduction.

The results of the Oct. 5 elections also reflect a geographically and socially polarised country. In the industrialised south and the state of São Paulo in particular, the strong desire to unseat the PT gave rise to a “useful vote” cast by many who, as they saw Silva’s popularity decline, threw their support behind Neves. In the state of São Paulo, Neves took 44 percent of the vote, compared to Rousseff’s 22 percent.

The PT’s strongest backing is in the impoverished Northeast, which has only slightly more voters than São Paulo. The president took nearly 60 percent of the vote in the Northeast, Brazil’s poorest region.

The two rivals are now both hoping to win the support of Silva and the coalition that backed her, headed by the socialists, which could be decisive in the runoff.

The difference between the moderate left-wing Rousseff and the business-friendly centrist Neves in the first round was 8.37 million votes, while Silva took 22.17 million votes.

What is still unclear is the direction that will be taken by the heterogeneous coalition headed by the PSB. In 2010, when the environmentalist ran for president as the Green Party (PV) candidate, she won 19.3 percent of the vote and remained neutral during the campaign for the runoff between candidates of the same two parties as today.

But the situation was very different back then. Silva presented herself as a third alternative, criticising the polarisation between the PT and the PSDB, and setting forth her own proposals.

Dissatisfied with the PV, she abandoned the Greens to create the Sustainability Network, aimed at promoting socioenvironmental sustainability and a new way of doing politics.

But her group did not achieve the necessary 492,000 signatures to become a political party because the electoral court failed to validate 95,000 signatures. Silva then decided to join the PSB, which named her vice presidential candidate on the ticket led by socialist leader Eduardo Campos.

However, Campos died in a plane crash on Aug. 13 and Silva replaced him as presidential candidate. Seen as the leader who best represented the widespread discontent that fuelled the June 2013 nationwide protests, her popularity soared, until she was ahead of Rousseff in the opinion polls.

But the future of Silva, who took only two percentage points more of the vote than in the 2010 elections, is now cloudy. Her political and personal weaknesses were revealed by the harassment from her opponents, especially the Rousseff campaign, which mounted aggressive ad attacks against the other woman in the race.

For example, the PT charged that Silva would eliminate the Bolsa Familia programme, which provides cash transfers to nearly 14 million poor households, would reduce investments in pre-salt oil fields exploration, and would hand power over to the bankers.

Under Brazil’s election laws, Silva’s team had just two minutes of electoral programming on nightly television – hardy enough time to defend herself from the allegations, let alone set forth her environmental proposals, which brought her international renown, or other attractive points on her platform, such as a “renewal of democracy”.

Because free electoral programming time in Brazil is proportionate to the parliamentary representation of each coalition, Rousseff had 11 minutes a day of broadcasting time.

For the second round, the time allotted is the same for both candidates: 10 minutes each.

But the ambiguous policy proposals and reversals that marked Silva’s campaign also hurt her image. She started out by reversing her stance just after the socialist party officially announced its support for same-sex marriage and other rights for homosexuals. She later fell into other contradictions regarding her record in the Senate.

Nor did Silva perform well in the televised debates.

It is not yet known whether she will stay with the PSB, which was left without a strong leader to hold it together, or will go it alone with her Sustainability Network. The socialists seem to be coming apart: Some of the PSB’s leaders have already come out in favour of Neves, while others have ties to the governing PT.

On the economic front, Silva’s advisers are close to their counterparts in the PSDB, which would push her towards supporting that party’s candidate in the second round. To that is added the accusations by the PT, which include the label “neoliberal” because of Silva’s economic orientation.

Backing either of the two candidates still in the race would hurt her central stance, which is to lead a third route to overcome the polarisation between the PT and the PSDB while renovating and cleaning up Brazilian politics.