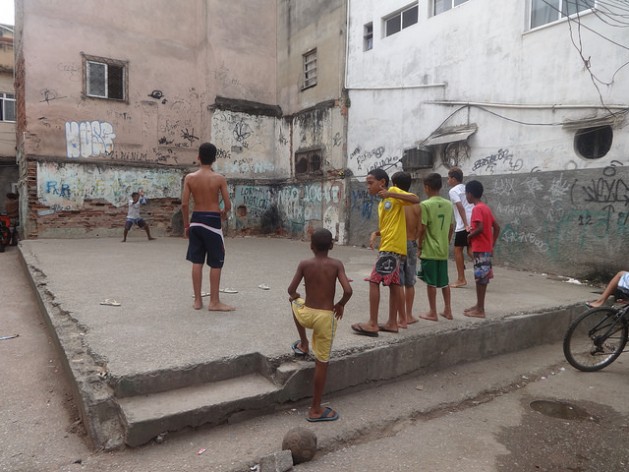 A football game in Jacarezinho, one of Rio de Janeiro’s favelas. For children from these poor neighbourhoods, the pomp surrounding the World Cup is a distant echo. Credit: Fabiana Frayssinet/IPS

RIO DE JANEIRO, Jun 6 2014 (IPS) - It seemed like “a good deal” at the time, but then things changed. That description of the 2006 purchase of a U.S. refinery, one of the oil industry scandals hanging over the Brazilian government’s head, could also apply to attitudes towards the FIFA World Cup.

In 2007, the fact that Brazil was chosen to host the 2014 International Federation of Association Football (FIFA) global championship triggered a sense of national euphoria. The mega sporting event would crown the economic ascent of this emerging power, which has won the most World Cups – five out of 18.

But now, instead of planning welcome parties for the Jun. 12-Jul. 13 tournament, Brazilians are taking to the streets in protests that are blocking traffic and bringing cities to a halt, holding strikes to demand wage hikes, and complaining about corruption and rights violations during the public works to prepare for the global event.

The country of football and joy is turning its back on its stereotype.

In Rio de Janeiro, the few streets decorated in green and yellow – the colours of the national team – contrast with the celebrations and sense of anticipation ahead of previous World Cups. The enthusiasm has been dampened just when Brazil is hosting the world’s biggest single-sport event.

The indignation of Brazilians erupted in June 2013, with surprising and often violent protests against the poor performance of the health and education systems, chaotic traffic, corruption, and the enormous amounts being spent on preparations for the World Cup.

Worried about further unrest, the government has ordered the deployment of 157,000 police and military troops to guarantee security during the games that will be held in 12 cities in this enormous country of nearly 200 million people.

But the declining excitement over football “is a tendency that has been seen in the last three World Cups,” said Paulo Santos, who has worked as a barber for 40 years in a lower middle-class Rio de Janeiro neighbourhood and hears the views of hundreds of clients, in a kind of ongoing informal opinion poll.

Hosting the World Cup should have revived the passion of fans.

But “they’re holding the party with other people’s money – ours,” complained Santos, reflecting the widespread sensation that the whole exercise has been marked by corruption, the squandering of public funds and FIFA’s greed.

Surveys reflect this view. In February, only 52 percent of those interviewed by the Datafolha polling institute were in favour of organising the World Cup, down from 79 percent in 2008.

The most recent poll, limited to the southern city of São Paulo, found that 45 percent of respondents were in favour and 43 percent were against, while the rest said they didn’t care. But worse than that was the fact that an overwhelming majority, 76 percent, said they thought the country wasn’t prepared to host the marathon of 64 games among 32 national teams.

Many of the projects planned, especially the urban transport works, were not carried out or were left incomplete. Some of the 12 stadiums were not finished until the last minute, without the finishing touches and without being tested. Half of them lack wireless Internet connection.

Delays in infrastructure works are a tradition in Brazil. The same thing happened in the first World Cup, held in Brazil in 1950. The main stadium, Maracaná in Rio de Janeiro, was inaugurated only a few days before the event, in the midst of a muddy construction site littered with left-over materials.

But the current megalomania is different. Since the last decade, Brazil has been caught up in a frenzy of building hydropower dams, railways, ports, highways and freeways, in an attempt to overcome the infrastructure deficit accumulated over the preceding two decades.

Most of the major projects are years behind. The main railway, a 4,155-km north-south route, has been under construction for 27 years, with only one-third of the rails installed. 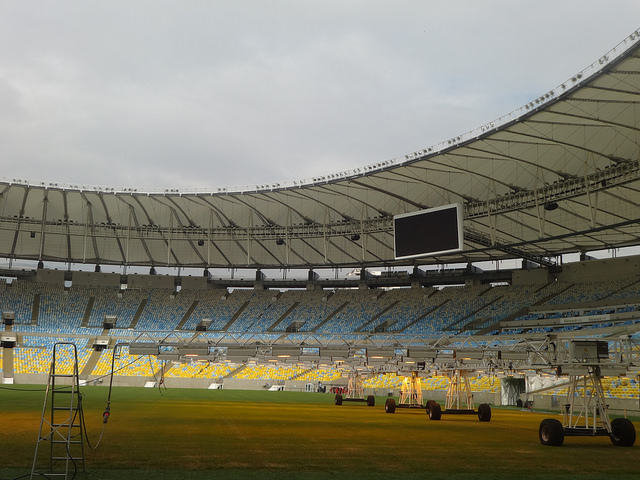 Rio de Janeiro’s Maracana stadium, remodelled for the World Cup. Excessive spending on the installations is one of the complaints being voiced by protesters in Brazil. Credit: Fabiana Frayssinet/IPS

But no delays are possible in the case of the preparations for the World Cup in 12 cities and for the 2016 Olympic Games in Rio de Janeiro.

The looming deadlines may have been a factor in some of the accidents that have caused the deaths of nine workers in the World Cup stadiums, seven of them employed by subcontractors.

The rise in the number of workers concentrated in large construction sites all around the country has empowered construction workers. After a number of strikes, they secured wage hikes and benefits such as more frequent visits home for those who are working in distant regions.

But working conditions are still unsafe and accidents have been frequent, almost always due to lack of protection measures such as safe scaffolding, said Vitor Filgueiras, an economist investigating the phenomenon in his postdoctoral research.

Outsourcing is “a way of transferring risks,” and it makes working conditions even more unsafe and can even give rise to slave-like labour, he argued.

The World Cup has been a common focus for the recent protests and strikes by students, teachers, bus drivers and other groups. But popular support for the street demonstrations and battles has dropped sharply, according to opinion polls – luckily for the government of Dilma Rousseff.

A year ago, 54 percent of those surveyed by the Vox Populi Institute supported the protests, compared to just 18 percent today.

That reduces the risk of massive demonstrations during the World Cup itself. But groups made up of a few dozen activists are now paralysing cities, in a kind of guerrilla warfare benefited by the constant traffic jams.

The October presidential and legislative elections are also politicising football. The World Cup and the government are linked in the public’s mind. A failure for Brazil, in the stadiums or in the organisation of the event, would drive up the number of votes for the opposition.

The president is still the clear front-runner, but football has taken on growing influence in the elections, added to other government initiatives that also sounded like a good idea at the time – but don’t any longer.

For example, the purchase of a refinery in Pasadena, Texas by Brazil’s state-run oil company Petrobras was supposed to boost the firm’s international expansion and enable it to refine heavy crude in the U.S. market.

But it cost three times the initial contract for 360 million dollars, and became less important because Brazil increased its production of light crude oil. The case is under investigation by oversight bodies and amplified other scandals involving Petrobras.

Measures to reduce the cost of electricity in 2012 and benefit both industry and households also turned out to be a disaster. They encouraged consumption at a time when a lengthy drought reduced hydropower generation, unleashing an energy crisis, with the threat of power outages.

The discontent, also fuelled by a high inflation rate and a sluggish economy, infected the World Cup, which was already affected by specific factors of its own. FIFA’s demands for extraordinary terms and conditions created “a state of emergency,” wrote labour judge Lygia Cavalcanti in the magazine published by the Judges for Democracy Association.

Brazil agreed to “a temporary suspension” of certain laws guaranteeing citizens’ freedom of movement and workers’ right to strike in order to hold the World Cup, she said.

In addition, FIFA was given exclusive rights to advertise, sell and distribute products within a two-kilometre radius around the stadiums, local residents were evicted and relocated, and 18,000 volunteers have been organised to work during the World Cup, even though under Brazilian law volunteer work can only be used by non-profit cultural, civic or welfare institutions.

In addition, FIFA was given the right to file and fast-track registration of any trademark it wanted relating to the 2014 World Cup in Brazil’s patent office, including around 200 commonly used words, expressions and symbols such as names using “2014”, like “Brazil 2014” or “Natal 2014”, which can only be used commercially this year if fees are paid to FIFA.

FIFA even charged the Alzirão Recreational and Cultural Association 28,000 reals (12,500 dollars) to organise the popular street party it has held since 1978 in Rio de Janeiro, where the Brazil matches are shown on a giant screen

Alzirão was going to have to pay broadcasting rights, because more than 30,000 people a day watch the games on the big screen.

Ferreira told IPS that the excitement for the World Cup “was lukewarm but is growing.” A triumph by Brazil in the opening game in the São Paulo’s Corinthians stadium could cheer people up and bring back the passion, he added.