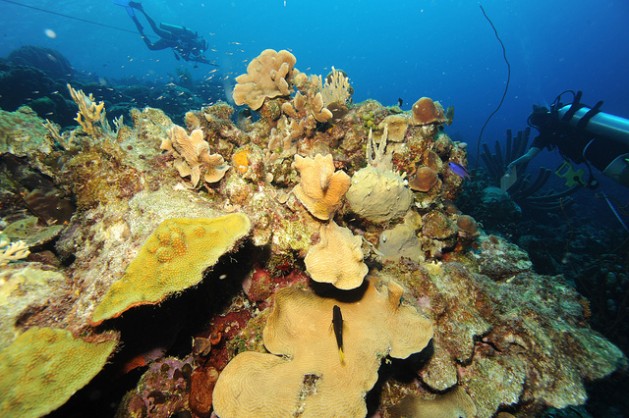 Coral reefs are the rainforests of the seas, providing food, resources and coastal protection to millions of people around the world. Yet they are on the frontline of destruction. At this Bonaire reef, the olive-green coral is alive, but the mottled-gray coral is dead. Credit: Living Oceans Foundation/IPS

“I have come to the United Nations compelled by the dictates of my conscience,” pleaded President Emanuel Mori of the Federated States of Micronesia.

"In the long-term, there are no winners on this planet if we lose the fight against climate change and biodiversity loss." -- Nathalie Rey of Greenpeace International

“We are all stewards of God’s creation here on earth. The bounties of Mother Nature are priceless. We all bear the obligation to sustainably manage them.”

An equally poignant appeal came from President Christopher Loeak of the Marshall Islands: “The Pacific Ocean and its rich resources are our lifeline. We are the custodians of our own vast resources on behalf of future generations.”

“Our suffering could have been prevented by the United Nations – if only you had listened,” he told delegates, pointing an accusing finger at the world body for dereliction of duty.

A two-week long Conference of the State Parties to the Convention on Biological Diversity (COP 12), currently underway in South Korea and continuing through Oct. 17, will finalise a road map to protect and preserve biodiversity, including oceans, forests, genetic resources, wildlife, agricultural land and ecosystems.

A report titled ‘Global Biodiversity Outlook 4‘ (GBO-4) released last week provides an assessment of the progress made towards achieving biodiversity targets set at a meeting in Nagoya, in Japan’s Aichi Prefecture, back in October 2010.

Nathalie Rey, deputy political director of Greenpeace International, told IPS the U.N. report monitoring “the miserable progress to date of implementation of the world’s government’s 10-year plan to save life on Earth shows that sustainable development is still a distant dream.”

Whilst small steps have been made, she said, it is going to require a giant leap forward to get the world on track to slow down and curb biodiversity loss altogether.

Rey pointed out that healthy and productive oceans are the backbone of the planet, and essential in the fight against poverty and ensuring food security. Coral reefs are the rainforests of the seas, providing food, resources and coastal protection to millions of people around the world. Yet the report highlights that they are on the frontline of destruction, she added.

“We continue to plunder them of fish, choke them with pollution and alter them forever with the impacts of human-induced climate change,” she said.

The acidification of oceans from the increased absorption of carbon dioxide in particular is having widespread effects on these coral ecosystems.

Reflecting another perspective, Alice Martin-Prevel, policy analyst at the Oakland Institute, a progressive think tank based in San Francisco, told IPS biodiversity preservation targets will never be achieved without secured access to land for farmers and safeguarding small holders’ ability to invest sustainably in their production activity.

She said the World Bank continues to produce business indicators, such as ‘Doing Business’ and the new ‘Benchmarking the Business Agriculture Project’, to encourage governments to create private land markets and open up to imported hybrid seeds and chemical fertilisers.

“This is why we launched the ‘Our Land Our Business’ campaign to protest the Bank’s business-friendly agenda and selling of countries’ ecosystems and land to foreign investors,” Martin-Prevel said.

She added that this jeopardises equal and environmentally-sustainable development.

She said the second report of the High Level Panel presented to the ongoing COP12 reiterates that estimates at global, regional and national levels all point to a substantial gap between the investments needed to deliver biodiversity targets and the resources currently allocated.

This is true for all of the 2010 Aichi Targets, she added.

“Although the developed country parties have legally committed to provide new and additional financial resources to meet the full incremental cost of implementing the CBD, this commitment, as with other environmental treaties, has not been honoured,” Ling said.

She said a regular excuse used now is about the current economic condition of developed countries which has restrained development funding.

Rey of Greenpeace International told IPS that without concerted efforts to keep climate change under control, “we will see irreversible damage to coral reefs and other vulnerable habitats, with devastating consequences for marine life and those people that directly depend on them for work and protein.”

Building resilience through the establishment of an extensive network of marine reserves – ocean sanctuaries free of industrial activities – will be an essential tool to help the marine world adapt to climate change and protect against other stressors such as overfishing and destructive fishing practices.

This is a target that governments are still lagging way behind on, she said.

In 2012, world governments committed to double funding towards addressing biodiversity loss. Still, shrinking state budgets are negatively affecting funding for environmental conservation. This points to a continued lack of understanding of the huge economic returns from investing in biodiversity protection, said Rey.

Furthermore, the cost of not acting now far outweighs the costs of acting in the future. There are sufficient sources of money, but it is often a case of redirecting these sources towards sustainable activities, she noted.

Rey also said a clear starting point identified by the Convention for Biological Diversity (CBD) will be to reallocate harmful subsidies to conservation.

It has been estimated, said Rey, that a staggering one trillion dollars or more of public money is spent by governments every year on subsidies harmful to the environment, including the agriculture, forestry and fishing sectors.

Yet whilst the report notes there is an increasing recognition of harmful subsidies, very little action has been taken.

The current U.N. report hopefully acts as a half-time reality check that forces a major game change in the second half of this decade. Green groups say governments and companies should stop defending destructive activities, like oil drilling in the Arctic, ancient deforestation and agricultural activities that promote industrial, chemical- dependent monocultures.

“Because in the long-term there are no winners on this planet if we lose the fight against climate change and biodiversity loss,” Rey declared.