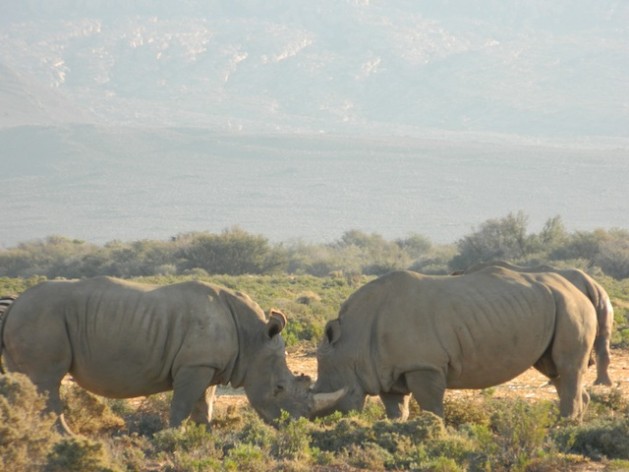 PYEONGCHANG, Republic of Korea, Oct 13 2014 (IPS) - For over five years, 33-year-old Maheshwar Basumatary, a member of the indigenous Bodo community, made a living by killing wild animals in the protected forests of the Manas National Park, a tiger reserve, elephant sanctuary and UNESCO World Heritage Site that lies on the India-Bhutan border.

Then one morning in 2005, Basumatary walked into a police check-post and surrendered his gun. Since then, the young man has been spending his time taking care of abandoned and orphaned rhino and leopard cubs.

Employed by a local conservation organisation called the International Fund for Animal Welfare (IFAW), part of the Wildlife Trust of India, Basumatary is today a symbol of wildlife conservation.

Engaging locals like Basumatary into wildlife protection and conservation is an effective way to curb wildlife crimes such as poaching, smuggling and the illegal sale of animal parts, according to Maheshwar Dhakal, an ecologist with Nepal’s ministry of environment and soil conservation.

“[Law enforcement personnel] must have proper arms. They must also have tools to collect evidence, and records. They need transportation and mobile communication to act quickly and aptly. Without this, despite arrests, there will be no convictions because of a lack of evidence." -- Maheshwar Dhakal, an ecologist with Nepal’s ministry of environment and soil conservation
On the sidelines of the ongoing 12th Conference of the Parties of the United Nations Convention on Biological Diversity (COP 12) in Pyeongchang, South Korea, Dhakal told IPS that poverty and the prospect of higher earnings often drive locals to commit or abet wildlife crime.

Thus efforts should be made to combine conservation with income generation, so locals can be gainfully employed in efforts to protect and preserve biodiversity.

“Conservation efforts must also create livelihood opportunities within the local community,” he added.

“Everyone wants to earn more and live well. If you just tell people, ‘Go save the animals’, it’s not going to work. But if you find a way to incentivize protecting [of] wildlife, they will certainly join the force,” said Dhakal, adding that his own country is moving rapidly towards a ‘zero poaching’ status.

Poaching and the illegal wildlife trade are a universal menace that has been causing severe threats including possible extinction of species, economic losses, as well as loss of livelihood across the world.

According to the recently released Global Biodiversity Outlook 4 (GBO-4), the latest progress report of the Convention on Biological Diversity (CBD), the current annual illegal wildlife trade stands at some 200 billion dollars annually.

The illicit enterprise is also thriving in Asia, touching some 19 billion dollars per year according to the Association of Southeast Asian Nations (ASEAN)’s Wildlife Enforcement Network.

Law enforcements agencies regularly confiscate smuggled products and consignments of skins and other body parts of animals including crocodiles, snakes, tigers, elephants and rhinos. The killing of tigers and rhinos is a specific concern in the region, with both creatures facing the impending risk of extinction.

One of the biggest killing fields for poachers is the Kaziranga National Park (KNP) in India’s northeastern Assam state, a UNESCO World Heritage Site and home to two-thirds of the world’s remaining Great One-horned Rhinoceroses. In addition, the park boasts the highest density of tigers globally, and was officially designated as a tiger reserve in 2006.

The 185-square-mile park had 2,553 rhinos in 2013. However, 126 rhinos have been killed here in the past 13 years, with 21 slaughtered in 2013 alone, according to the state’s Environment and Forest Minister Rakibul Hussain.

There is also a direct link between the illegal wildlife trade and political conflicts across the world, says a joint report by the United Nations Environment Programme (UNEP) and INTERPOL, which puts the exact volume of the illegal trade at 213 billion dollars annually.

Much of this money “is helping finance criminal, militia and terrorist groups and threatening the security and sustainable development of many nations,” the report states.

According to the report, several militia groups in central and western Africa are involved in the illegal trade of animals and timber. These groups profit hugely from the trade, including through the sale of ivory, making between four and 12.2 million dollars each year.

Another report published this past February by Chatham House, the Royal Institute of International Affairs in UK, also pointed to the example of the extremist Lord’s Resistance Army (LRA), which has been reported to harvest tusks from elephants in the Democratic Republic of the Congo and barter with Sudanese soldiers or poachers for guns and ammunition.

But the trouble does not end there.

Maadjou Bah is part of a COP-12 delegation from the West African country of Guinea, where an Ebola outbreak in December 2013 has since spread to the neighbouring countries of Liberia and Sierra Leone, killing at least 4,300 people to date.

Bah told IPS that illegal hunting and trade in wildlife species increases the possibility of the Ebola virus spreading to other countries. Though the government of Guinea has designated 30 percent of its forests as ‘protected’, the borders are porous, with trafficking and trade posing a continuous threat.

Besides primates, fruit bats are known to be natural carriers of the Ebola virus, and since trade in bats forms part of the illegal global chain of wildlife trade, it is possible that Ebola could travel outside the borders where it is current wreaking havoc, according to Anne-Helene Prieur Richard, executive director of the Paris-based biodiversity research institute ‘Diversitas’.

“We don’t know this for sure since there is a knowledge gap. But certainly the risk is there,” she told IPS.

Continued poaching is largely the result of slow law enforcement, according to Braullio Ferreira de Souza Dias, executive secretary of the U.N. Convention on Biological Diversity.

“Enforcement has to be a priority for government[s],” he told IPS.

This can be accomplished by, among other methods, providing law enforcement personnel with the skills and equipment they need to crack down on illegal activity. Forest guards, for instance, should be properly equipped – technically and financially – to prevent crime.”

“There is a need for capacity building in the law enforcement units,” Dhakal explained. “But that doesn’t just mean attending workshops and trainings. It means weapons, tools and technologies.

“They must have proper arms. They must also have tools to collect evidence, and records. They need transportation and mobile communication to act quickly and aptly. Without this, despite arrests, there will be no convictions because of a lack of evidence,” he said.

This is especially crucial in trans-boundary forests, where a lack of proper fencing allows poachers to move freely between countries.

Sometimes, the solutions are simpler.

“For example,” Dias stated, “Nepal has forged partnerships between the government and local communities. But what motivated the [people] to go out [of their way] to find time to prevent poaching? It’s that 50 percent of all earnings in Nepal’s national parks are directed towards local communities. [Officials] convinced them that if the poaching doesn’t stop then it would mean fewer visitors and lesser earnings,” he asserted.

A look at the country’s recent increase in the number of tigers and rhinos are proof of its successful conservation efforts: in the 1970s, Nepal had only a hundred tigers left in the wild. Today there are 200 and the country is aiming to double the number by 2020.

Similarly, the number of rhinos, which was a paltry 100 in the 1960s, is now 535. “We have recruited local youths as intelligence units who collect information on the movement of poachers. It works,” reveals Dhakal.

Experts say that ending demand globally is crucial to halting poaching and illegal trade. For this, collective action at the international level must be given top priority.

Dhakal, who is also the main spokesperson for the South Asian Wildlife Enforcement Network (SAWEN), told IPS that the network has roped in several governments in the region, along with organisations like the World Wildlife Fund (WWF) and INTERPOL.

Gaurav Gogoi, a member of the Indian parliament, says that governments can also cooperate at a bilateral level. “In the markets of Vietnam a single gram of rhino horn powder fetches up to [approximately 3,000 dollars],” he explained, adding that he is involved in lobbying events to push Vietnam to ban all products made of rhino horns in order to curb poaching elsewhere, including the Indian state of Assam.

“If you have poaching, it’s because there is someone out there who wants to buy those products. We have to address that,” Dias said.