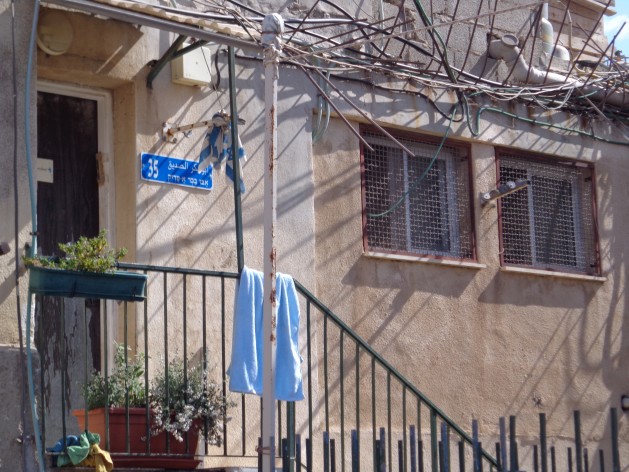 Israeli settler home in the middle of Sheikh Jarrah, a predominantly Palestinian neighbourhood in East Jerusalem, following the eviction of a number of Palestinian families. Credit: Mel Frykberg/IPS

RAMALLAH, West Bank , Oct 12 2014 (IPS) - A deliberate Israeli policy to Judaise East Jerusalem has forced thousands of Palestinians out of their homes and created a chronic housing shortage in the occupied part of the city.

Simultaneously, Israeli settlers have been encouraged by the Jerusalem Municipality to settle in the growing number of settlements mushrooming in East Jerusalem neighbourhoods, all illegal under international law.

The municipality has employed a number of strategies to ensure a Jewish majority so that the city remains under Israeli control indefinitely while preventing Palestinians from establishing East Jerusalem as the capital of a future state.

“Since 1967 the Israeli government has pursued a declared policy of maintaining a 72 percent majority of Jews over Palestinians in the city,” according to Jeff Halper of the Israeli Committee Against House Demolitions (ICAHD).

“Towards that end it has not allowed Palestinians to build new homes, creating an artificial shortage of some 25,000 housing units in the Palestinian sector, while Palestinians are not able to access most of the Jewish neighbourhoods.

“This induced shortage raises the price of renting or buying, and since 70 percent of Palestinians live under the poverty line, they are forced to move outside the Jerusalem borders to acquire affordable housing where they can be stripped legally of their Jerusalem residency,” explains Halper.

“Such are the political machinations behind the seemingly justified policy of demolishing ‘illegal’ homes, a key element of a broader policy of ethnic cleansing,” he adds.

“House construction is severely stifled by deficiencies in the planning and, to a lesser extent, delivery systems, both of which have been derailed by Israeli policy makers,” stated the report.

“Building legally, by obtaining a permit through the planning system, is impossible within the majority of land in East Jerusalem. The permit system rigidly maintains requirements that cannot be met as a result of the planning and infrastructural deficiencies.”

According to IPCC, these include “insufficient outline and detailed master plans, inappropriate zoning of urban areas as low density or ‘green’ land, insufficient physical infrastructure, including road, sewage and water networks and the near total absence of registered land.”

Most of the land in East Jerusalem (92 percent) is unregistered, making it impossible to obtain building permits.

The IPCC report said that “development is further stifled by institutional shortcomings such as the unavailability of suitable housing loans, insufficient capacity or willingness of the private sector to plan and deliver large housing projects, the limited amount of suitable development land for sale and its extraordinary cost.”

As a result, Palestinians have been forced to build without the requisite permits. Over 70 percent of new construction from 2001 to 2010 was undertaken without building permits, with informal dwellings comprising between 42 and 54 percent of all housing.

Average room density is 1.9 people per room, making it 90 percent higher than in Jewish West Jerusalem.

While the Israeli authorities have set strategies concerning the Judaisation of East Jerusalem, Israeli settlers have been using other methods to slowly take over.

Muhammad Sabbagh is a resident of Sheikh Jarrah in East Jerusalem who, together with other Palestinian activists, is involved in a long, ongoing battle with Israeli settlers over home ownership and possible eviction.

His extended family is part of a group of 28 Palestinian refugee families who live right next to several Israeli settlement homes.

However, following Israel’s occupation of the territory in 1967 Israeli settlers tried to evict the Palestinians claiming they had documents proving ownership of the homes from the late 1800s during the Ottoman Empire.

The case went back and forth to the Israeli courts until an agreement was reached that the Palestinians could stay for the next 90 years if they agreed to pay rent.

When some of the families refused to pay the rent on the basis that the homes belonged to neither the Israeli government nor the settlers, they were evicted in the middle of the night by heavily armed soldiers and police.

Subsequent court action and original Turkish documentation proved that the settlers’ documents were forged and that the homes had never belonged to the Jewish community several hundred years ago as the settlers had claimed.

Further evictions have currently been frozen by the Israeli courts on the basis of the documents being forgeries but Sabbagh says that is insufficient.

“We are now fighting to have the homes returned to us as their legal owners and so that the families who were evicted can return home.”