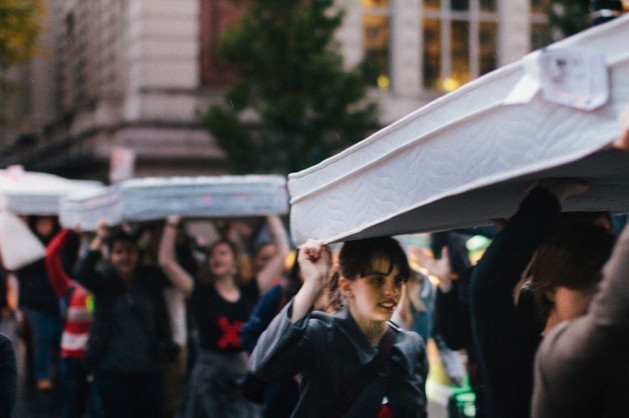 Students at Columbia University carry mattresses on the Carry That Weight National Day of Action to show their support for survivors of sexual assault. Credit: Warren Heller

UNITED NATIONS, Nov 25 2014 (IPS) - “A recurring nightmare for me is I’m trying to tell someone something and they are not listening. I’m yelling at the top of my lungs and it feels like there is a glass wall between us.”

Jasmin Enriquez is a two-time survivor of rape. Like two-thirds of rape survivors, Enriquez knew her rapists. The first was her boyfriend when she was a high school senior, the second a fellow student she had been seeing at college.

“[The nightmare] shows how I’ve always felt that even as someone coming forward as a survivor, as soon as I start giving details to some people, they instantly start to shut it down. As in, you’re being crazy or hyperemotional, instead of taking it as one whole piece and looking at it holistically,” Enriquez told IPS.

Women who have experienced gender-based violence are at a significantly increased risk of developing a mental disorder, such as post-traumatic stress disorder, anxiety or depression, within one to three years after the assault.

Enriquez explains, “People don’t seem to understand that after being sexually assaulted, it’s something that you have to live with the rest of your life.

“Most of the time there is an incredible amount of anxiety or depression or other mental health issues that people just don’t understand,” she says. “It’s been five years since I was sexually assaulted and I still live through the trauma.”

A special Lancet series published Friday says that one in three women have experienced physical or sexual violence from their partner.

Researcher Dr. Susan Rees from the University of New South Wales told IPS that there is strong evidence that if you are exposed to gender-based violence, you are at a much higher risk for the onset of post-traumatic stress disorder (PTSD), anxiety and depression as well as attempted suicide.

Rees’ research into the connection between gender-based violence and mental disorders has shown that women who have been assaulted are significantly more likely to experience a mental disorder in their lifetime.

It is important for survivors of assault to get early support to help prevent the onset of an associated mental disorder, Rees said.

However, experiencing sexual assault can be confusing, especially for young women and girls, and this may prevent them from getting early intervention.

Enriquez explains that she didn’t initially realise the connection between her response to the trauma of sexual violence and the symptoms she was experiencing.

“I’ve recently been very jumpy, kind of always tense and I get startled easy, I didn’t understand why that was happening and it was very frustrating.”

Enriquez’ fiancé, who is not the person who assaulted her, used to jump out at her or play games to surprise her, and she found this really upsetting,

“I didn’t understand that it was related to me being sexually assaulted until probably my senior year of college. I feel like if I had been educated about what normal symptoms are of PTSD, I would have known that there was more to it and that it was a normal piece of it.”

Community attitudes towards women, including strong patriarchal attitudes, power imbalance and gender inequality contribute to the prevalence of violence against women, said Rees.

“It makes sense that if you change attitudes then you can change prevalence, you can reduce the risk for women,” she said.

This is what Enriquez aims to do with her organisation Only With Consent. Together with her fiancé, Enriquez speaks with students to raise awareness and change young people’s attitudes towards sexual assault.

“I definitely think that there’s a gender piece that goes with both the mental health and the sexual assault and that it ties back to any time a woman expresses an emotion of being angry or upset we immediately call her out for being irrational or emotional.” Enriquez told IPS.

“If the majority of survivors who are speaking out are women, and they are expressing these feelings of being upset or being angry, or being really hurt, or any of those feelings, we discredit what they are saying, because we see them as irrational creatures,” Enriquez said.

Psychologist Dr. Dana Sinopoli told IPS that it is also important to consider how gender-based violence affects men, especially men who experience childhood sexual assault. She said that this should involve addressing gender stereotypes such as that men are aggressive or impulsive.

“People of all gender identities can experience and be affected by sexual and domestic violence—women are not the only survivors just as men are not the only perpetrators. We strive to challenge narrow and inaccurate representations of what assault looks like and also acknowledge that these forms of violence disproportionately affect women, transgender, gender nonconforming, and disabled people.”

Sinopoli added however that changing community attitudes towards women was an important part of addressing gender-based violence.

“That is what we can link to the depression and the anxiety and a lot of the re-experiencing and retriggering that is so central to PTSD,” Sinopoli said.

Sinopoli added that “the way that society reacts, to someone who discloses or is struggling, is so important.

“The more that people speak up the more that we will actually see a decline in such significant psychological symptoms.”

When helping someone who has experienced violence, Rees said that it is important that friends and family reassure the victim that it “it is never acceptable to be hit, or to be treated violently or to be raped.”

Unfortunately, population studies show that women who have experienced gender-based violence are also at increased risk of experiencing it again in their lifetime.

“This might be the case because often men target women who are vulnerable, so if she has a mental disorder or trauma as a result of an early childhood adversity, she may be more likely to be targeted by men who in a sense benefit from powerlessness, inequality and fear.”

She said that warning bells that a relationship is unhealthy include controlling, jealous behaviour such as telling you who you should socialise with, or getting jealous because you are doing better than he is at university.

“Often women think that’s because he cares about me, he’s worried about me and that why he wants to know where I am all the time,”

But this type of behaviour should actually be seen as a warning of future emotional and perhaps physical abuse, Rees said.

“She may be suffering depression. She may not have the economic resources to leave. She may worry about the children, and rightly so, because often people end up homeless, and she also may know that she’s at high risk of retaliation from the perpetrator if she leaves.”

Rees also explained that it is important for health practitioners to receive training so they can be confident to ask about domestic violence and respond appropriately.

She added that primary health care responses need to be integrated with community-based services to ensure that survivors have access to help that is sensitive to the complex impact of sexual violence.