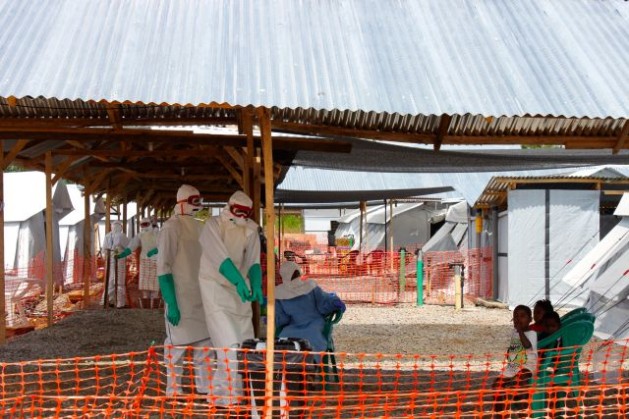 An Ebola treatment centre in Kenema, Sierra Leone, on the day of a visit from Anthony Banbury, Special Representative of the Secretary-General and Head of the UN Mission for Ebola Emergency Response (UNMEER). Credit: UN Photo/Ari Gaitanis

WASHINGTON, Nov 13 2014 (IPS) - The United States proposed Tuesday that the international community write off 100 million dollars in debt owed by West African countries hit hardest by the current Ebola outbreak. The money would be re-invested in health and other public programming.

U.S. Treasury Secretary Jack Lew will be detailing the proposal later this week to a summit of finance ministers from the Group of 20 (G20) industrialised countries. If the idea gains traction among G20 states, that support should be enough to approve the measure through the International Monetary Fund (IMF), where the United States is the largest voting member.

"The plan is for that money to be re-invested in social infrastructure, including hospitals and schools … to deal with the short-term problem of Ebola but also the long-term failure of the health systems that allowed for this outbreak.” -- Jubilee USA’s executive director Eric LeCompte

“The International Monetary Fund has already played a critical role as a first responder, providing economic support to countries hardest hit by Ebola,” Lew said in a statement to IPS.

“Today we are asking the IMF to expand that support by providing debt relief for Sierra Leone, Liberia and Guinea. IMF debt relief will promote economic sustainability in the worst hit countries by freeing up resources for both immediate needs and longer-term recovery efforts.”

These three countries together owe the IMF some 370 million dollars, according to the U.S. Treasury, with 55 million dollars due in the coming two years. Yet there are already widespread fears over the devastating financial ramifications of Ebola on Guinea, Liberia and Sierra Leone, in addition to the epidemic’s horrendous social impact.

Last month, the World Health Organisation warned that the virus now threatens “potential state failure” in these countries. The World Bank, meanwhile, estimates that the virus, which has already killed more than 5,000 people and infected more than 14,000, could cost West African countries some 33 billion dollars in gross domestic product.

Of course, much of the multilateral machinery is often too cumbersome to respond to a fast-moving viral outbreak. Yet there is reason to believe that the U.S. plan could have both immediate and long-term impacts.

That’s because the plan would see the IMF tap a unique fund set up in the aftermath of the 2010 Haiti earthquake, which facilitated the cancellation of nearly 270 million dollars of Haitian debt to the IMF. Called the Post-Catastrophe Debt Relief (PCDR) Trust, it is aimed specifically at responding to major natural disasters in the world’s poorest countries.

Originally, the PCDR Trust was capitalised with more than 420 million dollars. Today, a U.S. Treasury spokesperson told IPS, the trust has some 150 million dollars in it – money that would be available almost immediately.

“Our proposal is for the IMF to provide debt relief for these Ebola-affected nations from this trust,” the spokesperson said. “The U.S. would like to see around 100 million dollars put toward this effort, however the precise amount will need to be determined in consultations with the IMF and its membership.”

The IMF, meanwhile, says it is preparing to consider the proposal. In September the Washington-based agency made available 130 million dollars in immediate support to Guinea, Liberia and Sierra Leone.

“We are very glad that some donors have expressed an interest in increasing support for the Ebola-affected countries. We are reaching out to all donors to see how we might be able to take this forward … using all the tools available to us,” an IMF spokesperson told IPS.

“[Debt relief] decisions are made according to the merits of the particular case and this would be approached in the same way. We would expect the Board to be briefed soon on this topic.”

For development and anti-poverty advocates, debt obligations on the part of poor countries constitute a key obstacle to a government’s ability to respond to critical social needs, both in the short and long term.

In the West African epicentre of the current Ebola outbreak, many analysts have held chronic low national health spending directly responsible for allowing the epidemic to spiral out of control. And when looking at feeble public sector spending, it is impossible not to take into account often crushing debt burdens.

For instance, Guinea spent a little more than 100 million dollars on public health in 2012 but paid nearly 150 million dollars that same year on internationally held debt, according to World Bank figures provided by Jubilee USA, an anti-debt advocacy network that has spearheaded the push for the United States to make the current proposal.

“As bad as Ebola has been, some of these countries have far greater challenges with deaths from malaria than from Ebola,” Eric LeCompte, Jubilee USA’s executive director, told IPS.

“The amount is incredibly important because it cancels a significant portion of the debt completely. And the plan is for that money to be re-invested in social infrastructure, including hospitals and schools … to deal with the short-term problem of Ebola but also the long-term failure of the health systems that allowed for this outbreak.”

LeCompte was also involved in the creation of the Post-Catastrophe Debt Relief Trust, in the aftermath of the Haitian earthquake. His office has advocated for the fund’s monies to be used since then – for instance, to react to flooding in Pakistan and Typhoon Haiyan in the Philippines.

But he says these and other proposals have been rejected by the IMF’s membership, on the rationale that these countries were developed enough to be able to mobilise financing in other ways. (The IMF says PCDR funds are for response to “the most catastrophic of natural disasters” in “low-income countries”, when a third of a country’s population has been affected and a quarter of its production capacity destroyed.)

Not only are Guinea, Liberia and Sierra Leone among the poorest countries in the world, but the Ebola outbreak there has a potentially direct impact on the rest of the globe.

“This is a very clear opportunity to point to the 150 million dollars left in that fund and to note that Ebola is every bit the same as the Haitian earthquake in terms of being a regional calamity,” LeCompte says.

“The difference is that this is also a long-term investment in the very problems that allow Ebola to spread. So we’d be not only addressing the current issue, but also the next disease outbreak in that region.”

It is unclear whether there is a mechanism in place to top up the PCDR Trust in the future. The IMF states that “Replenishment of the Trust will rely on donor contributions, as necessary.”

But for his part, LeCompte says the fund has the potential to fill a significant gap: offering a pot of money, immediately available, that could be quickly mobilised to deal with true crises afflicting the world’s poorest countries, from hurricanes to major financial defaults.