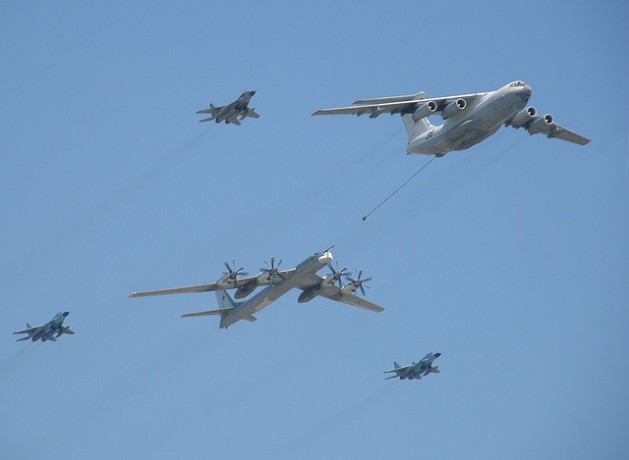 The Tupolev Tu-is a large, four-engine turboprop powered strategic bomber and missile platform. First flown in 1952, the Tu-95 was put into service by the former Soviet Union in 1956 and is expected to serve the Russian Air Force until at least 2040. Credit: Dmitry Terekhov/cc by 2.0

But this was a decrease of about 2.0 percent over the previous year, and the third consecutive year of decline in total arms sales by these defence contractors.

Still, Russian companies increased their sales by about 20 percent in 2013 compared with U.S. and Western arms manufacturers.

Siemon Wezeman, senior researcher with SIPRI’s Arms and Military Expenditure Programme, said “the remarkable increases” in Russian companies arms sales in both 2012 and 2013 are in large part due to uninterrupted investments in military procurement by the Russian government during the 2000s.

“These investments are explicitly intended to modernise national production capabilities and weapons in order to bring them on par with major U.S. and Western European arms producers’ capabilities and technologies,” he added.

But these gains, however, were registered long before the Russian intervention in Ukraine and Crimea last February.

With economic and military sanctions imposed by the United States and Western Europe against Moscow this year, there is a possibility that Russian arms sales, particularly exports, may suffer when new figures are released for 2014.

Asked about a potential decline, Wezeman told IPS “it is almost impossible to make predictions.”

The sanctions will not have a great effect on the short term, but the Russian industry may feel them if the sanctions stay in place for some years, he added.

According to SIPRI figures, Western Europe offered a more mixed picture, with French companies increasing their sales, while sales by British companies remained stable, and sales by Italian and Spanish arms-producing companies continuing to decline.

The share of global arms sales for companies outside North America and Western Europe has been increasing since 2005, says Dr. Aude Fleurant, director of SIPRI’s Arms and Military Expenditure Programme.

The Russian company with the largest increase in sales in 2103 is Tactical Missiles Corporation, with a growth of 118 per cent, followed by Almaz-Antey (34 per cent) and United Aircraft Corporation (20 per cent), according to SIPRI.

Almaz-Anteys arms sales in 2013 make it the 12th-largest arms producer (excluding China) and bring it closer to the top 10, which has been exclusively populated by arms producers from the United States or Western Europe since the end of the Cold War.

The year 2013 also saw the introduction of a 10th Russian arms company, communication and electronics manufacturer Sozvezdie, to the SIPRI list of top 100.

Wezeman told IPS Russia has for some years realised it is technologically behind in many aspects of weaponry and that it will need foreign input to develop new generations of weapons.

It has been looking for Western companies to partner with in the development of new generations of weapons and key components, he noted. Russia has been negotiating with European companies on cooperation in wheeled armoured vehicles, jet engines and avionics.

“The sanctions have killed those talks and that leaves Russia in the position it was before – not having all the technology and not having the funds or the expertise to develop it all on its own,” Wezeman said.

He said sanctions have also put pressure on production and development of Russian weapons for export.

Some of the most advanced Russian export weapons (e.g. Su-30 combat aircraft) rely on Western components and the sanctions seem to also ban such components – but only if they are part of new agreements, since the European Union sanctions ban sales under agreements reached after the sanctions were agreed.

Wezeman also said Russian officials have complained for years that arms factories are outdated with worn-out production equipment. A major plan has been announced to modernise the factories, but Russia just doesn’t have the technology to do it on its own, he added.

“It needs input from more developed Western countries, but that is largely out of the question, with sanctions and the whole changed Western relations with Russia,” he noted.

Asked if Russian arms sales will be affected by sanctions, Wezeman said in the short term Russia’s exports are unlikely to take a hit.

Probably the first exports that could suffer would be helicopters and trainer aircraft using Ukrainian-produced engines, he predicted.

Ukraine seems to have stopped all arms deliveries to Russia, including components such as engines for Mi-17 and Mi-24 helicopters and Yak-130 trainer/combat aircraft (officially it has, but it is a bit uncertain if that embargo is 100 percent or if it excludes such components used in weapons that are meant to be exported from Russia), he said.

With India and China defying U.S. and Western sanctions, Russia now finds it even more important to look for partners in large markets in Asia, including joint technology agreements in the development of new weapons.