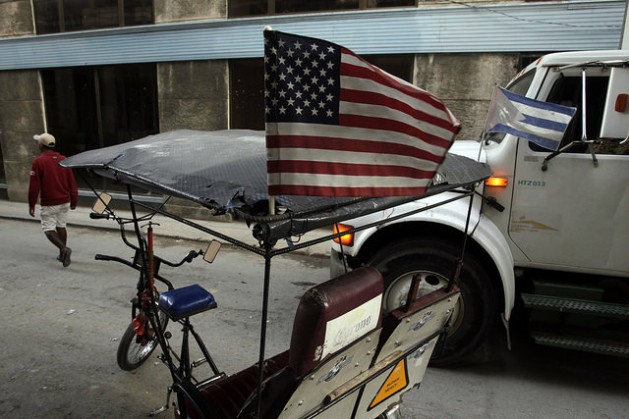 The U.S. and Cuban flags adorn a bicycle-taxi in Havana, a few hours after the announcement of the reestablishment of diplomatic relations between the two countries, which were broken off in 1961. Credit: Jorge Luis Baños/IPS

HAVANA, Dec 18 2014 (IPS) - The announcement that the United States and Cuba would reestablish diplomatic relations took most Cubans by surprise. Over half of the population was born after the severing of ties in 1961 and the start of the embargo that has marked their lives.

“I wasn’t expecting it; it’s the news of the century and a step that will put in gear many changes,” a journalist who has followed the question for years told IPS.

Groups of university students took to the streets on Wednesday to celebrate the return of the three Cuban agents serving out lengthy sentences in U.S. prisons on charges of spying.

A U.S. contractor serving time in a Cuban prison, Alan Gross, was also released. His arrest and sentencing to 15 years in prison on charges of involvement in subversive plans in Cuba was seen by Washington as a major hurdle to the normalisation of relations with Havana.

Nor was the Cuban government willing to move in that direction unless the Cuban agents were freed.

Antonio Guerrero, whose sentence ended in 2017; Ramón Labañino, sentenced to 30 years; and Gerardo Hernández, who had been given two life sentences, arrived in Havana on Wednesday.

The other two members of the group known as “the Cuban five”, René González and Fernando González (no relation), had served out their sentences and have been back in Cuba since 2013 and February of this year, respectively.

In a televised speech – broadcast simultaneously with U.S. President Barack Obama’s address in Washington – President Raúl Castro said that his openness to dialogue with the U.S. gave continuity to his brother Fidel’s (president from 1959 to 2008) willingness to negotiate.

Observers see that statement as targeting segments of society and even within the government who could be opposed to the normalisation of relations. “The conflict with the United States, and especially the embargo, has served for decades to justify our shortcomings,” a researcher who wished to remain anonymous told IPS.

The reestablishment of diplomatic ties does not include the lifting of the trade and economic embargo against Cuba, a decision that is up to the U.S. Congress. But Castro urged Obama to “modify its application by use of his executive powers.”

More than seven million people in this country of 11.2 million were born under the embargo.

But the move towards normal relations with Cuba’s powerful neighbor only 90 miles away will pose enormous challenges to this country’s socialist development model, which Castro says he will not abandon.

Luis Emilio Aybar, a sociologist, says Cuba should follow a pragmatic policy of economic and political ties like the ones it has with many other countries, while maintaining its “alternative anti-capitalist and anti-imperialist policies” – but without forgetting that the U.S. will continue to be the main enemy of this form of government.

Vulnerability to different kinds of foreign influences “will now be multiplied manyfold, and will be added to the loss of hegemony that socialist values are suffering in our country. The U.S. government understands the situation clearly; that’s why it took this step,” said Aybar, who believes the solution to the dilemma “lies in understanding that you can be pragmatic and radical at the same time.”

Rita María García Morris, executive director of the independent Christian Centre for Reflection and Dialogue, said it was important for civil society institutions to keep their doors open to a conciliatory dialogue, even if it is difficult and painful. “It has never been easy to acknowledge differences,” she said.

The reforms undertaken by the government of Raúl Castro, such as an expansion of private enterprise and a new foreign investment law, enabled the government to optimise relations with the rest of Latin America and the Caribbean and with traditional allies like China and Russia, and to renew negotiations with the European Union.

Havana and Brussels are involved in talks towards a political and cooperation agreement that would further diversify the diplomatic ties of the Cuban government, which is keen on drawing larger flows of investment to ensure growth, particularly in the Mariel special economic development zone.

Against that backdrop, the United States appeared to be increasingly isolated in its stance towards Cuba, which was officially invited to take part in the next Summit of the Americas, in Panama in April, despite Washington’s resistance. Now that things have changed, Castro and Obama will be able to use that occasion to strengthen the direct dialogue that they began with a phone conversation on Tuesday Dec. 16.

Pope Francis’s mediation in the process that led to the new relations between the U.S. and Cuba did not come as a surprise, given the dialogue in recent years between Castro and the Catholic Church leadership in Cuba, which helped bring about the release of several dozen political prisoners.