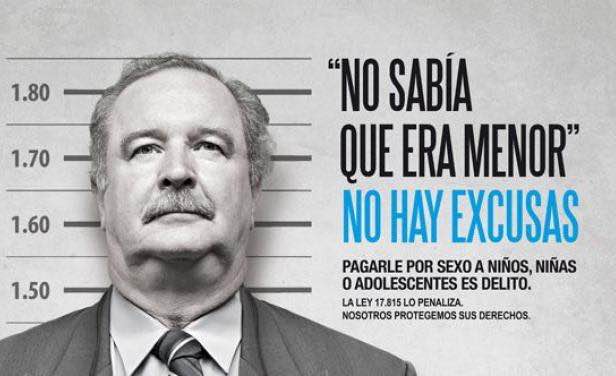 MONTEVIDEO, Jan 5 2015 (IPS) - Karina Núñez Rodríguez was only 12 when she was forced into prostitution. Now age 50 and a mother of six, she is an outspoken fighter against sexual exploitation of children and teenagers in Uruguay, a country reluctant to recognise this growing scourge.

Her mother’s surname, Rodríguez, “has everything to do with what I am,” she says, explaining that her grandmother was also an exploited child. Karina proudly says she broke this family burden when her youngest daughter turned 12 as a smiling girl ready to go to high school.

“There were nine guys who gave me a beating. I was 11 days in an intensive-care unit and three months unable to walk. Once I could, I returned to report the same crime." -- Karina Núñez Rodríguez

It was an assurance that her own children have a bright future, even though Karina still makes a living selling her body.

In Uruguay, a countless number of children, mostly girls, have their childhoods stolen, to be sold for a pack of cigarettes, a cell phone card, food, clothes, shelter or plain cash. Some are exploited by their own relatives, others by by neighbours or organised criminal networks.

One grocer threw dance parties in her shop on the paydays of local rural workers and lured the men with 12 year-old-girls from the neighbourhood. The girls would spend the night drinking alcohol and having sexual relations with adults on the premises of a nearby chapel.

A 74-year-old owner of a hotel in a beach resort paid for the travel of a 15-year-old girl, who lives hundreds of kilometres away, to have sex. Afterwards, despite sending money to her pimps, the man avoided punishment by claiming he didn’t know she was underage.

A provincial high-ranking public official organised a party with teenagers, alcohol and cocaine in a government facility, and was caught drunk while driving away with one of the girls.

And a network of lorry drivers and the fathers of two victims forced girls into sexual encounters with drivers in three different towns.

These types of cases hit the news almost twice a week. Authorities established Dec. 7 as the national day against sexual exploitation of children. But they still have no accurate statistics on this crime, punishable by up to 12 years in prison under a 2004 law. Adult prostitution is legal and state-regulated.

There are as many as 1.8 million children exploited in prostitution or pornography worldwide, according to Ecpat. Nearly 80 per cent of trafficking is for sexual exploitation and over 20 percent of the victims are children.

From 2010 to September this year, the judiciary heard 79 cases involving 127 defendants. Only 43 were convicted, according to a report published by the judicial branch.

“Each case is not just one boy or girl. It can involve four or five,” says Luis Purtscher, president of the National Committee for the Eradication of Commercial and non-Commercial Sexual Exploitation of Children and Teenagers (Conapees). Perpetrators outnumber victims. “In a single night, a girl can have five or 10 sexual partners,” he says.

“Being a problem whose underlying causes are the power of capitalism to seize territories and the male workforce migrations, we could hypothesise that when both the economy and the mobility grow, child sex crimes also rise in places colonised by investors,” says Purtscher.

In the last five years, Conapees has trained 1,500 public servants, including teachers, social workers, police officers and prosecutors. “We have 3,000 extra ears and eyes skilled somehow to detect and report,” he adds.

Gender violence plays a role. On a list of 12 Latin American countries, Spain and Portugal, Uruguay has the highest rate of killings of women by a former or current partner, states a recently released report by the regional Gender Equality Observatory.

To graphically illustrate the depth of the problem, Conapees published an advert in the press: ‘Very young girls’, followed by a phone number. It received 100 calls the first day and 500 the first weekend.

Karina became an activist after witnessing the suffering of girls subjected to “breaking-down practices” in brothel-bars: torture, forced and collective penetrations and beatings, “aimed to create such a bond of fear between the victim and her exploiter that she can stand night after night in a corner in Europe without even thinking to go to the police.”

Her record includes 27 crime reports to authorities. “I was instrumental in nine indictments, and I’m honoured by people who trust me and give me more evidence.” She checks the facts and relies on a network of eight friends in different cities. “Thank God we have WhatsApp,” she says with a smile.

In 2007, she and other colleagues created Grupo Visión Nocturna (Night vision group) to promote an independent stance on health-related issues and demand respect for sex workers.

Shortly after reporting to a small city’s police station that three girls were about to be trafficked in 2009, a supposed client picked her up. They travelled 20 kilometres away from town. “There were nine guys who gave me a beating. I was 11 days in an intensive-care unit and three months unable to walk. Once I could, I returned to report the same crime,” she recalls. Karina has been threatened and fears she could be killed at any time.

Making public accusations is dangerous, yet the crime and the victims are not hidden. Belgian photographer Susette Kok visited many sites in an exhibition and book and portrayed 27 adults –24 women, two transgender women and a young man— who were child victims and now, invariably, are sex workers.

“I found the exploitation easily. It is all over the place,” says Kok, who was assisted by Karina’s knowledge and web of contacts.

The “little house of love”, a group of dilapidated and unroofed walls, the floor covered with used condoms, is just next door to a church in Fray Bentos, in the southwest of Uruguay. An oxidized “container of passions” – situated in a sports field and, again, next to a church at the entrance of the western city of Young— has the door open when it is vacant.

Dozens of places like it are scattered through the area: a bench in a communal football field, a huge tree by a bridge, ironically known as “ecological sex”, shacks, clubs and “waitress bars”.

In west Montevideo, bus stations, parks, canteens and even private houses are sites of child sex offences, according to the survey “An open secret”, authored by Purtscher and other seven experts who interviewed more than 50 sources.

The area is attracting major investment and a predominantly male workforce, which could worsen the situation, but it does not have mechanisms to assist the victims. Nor does the country as a whole. A governmental programme established in 2013 is underfunded and counts just two teams.

This slow official response exasperates Karina. “When a child is exploited,” she says, “we cannot wait.”