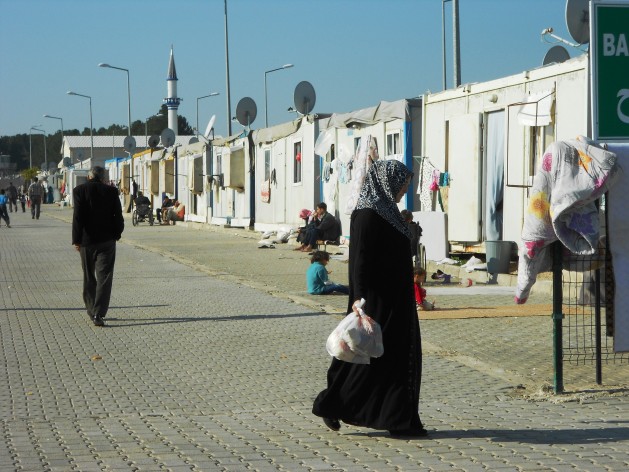 The Harran camp for Syrian refugees was one of the last to be built by the Turkish government in 2012 and is considered the most modern, with a capacity for lodging 14,000 people in 2,000 containers. Credit: Fabíola Ortiz/IPS

HARRAN and NIZIP, Turkey, Jan 4 2015 (IPS) - “We ran as if we were ants fleeing out of the nest. I moved to three different cities in Syria to try to be away from the conflict, but there was no safe place left in my country so we decided to move out.”

For Professor Helit – who was describing what he called the indiscriminate bombing of cities and burning of civilian houses by the Syrian regime under President Bashar al-Assad when he fled his country two years ago – this “moving out” meant taking refuge across the border in Turkey in one of the so-called “accommodation camps” provided by the Turkish government.

Helit and his 10 children – five daughters and five sons – fled on December 31, 2012, hitch-hiked a lift in a truck to the border with Turkey, and then made their way to the refugee camp in Harran, 20 kilometres from the Syrian border.

The Syrians refugees living in Harran have tried to reproduce the lifestyle they had in their homeland, but every family has a sad story to tell – many have lost relatives in the conflict and others still have members in the battlefields fighting the regime

The camp in Harran was one of the last camps to be built by the Turkish government in 2012 and is considered the most modern, with a capacity for lodging 14,000 people in 2,000 containers.

For more than thirty years Helit had been the headmaster of a school in Syria before the outbreak of the armed conflict in Syria in March 2011. He now runs the camp school for 4,700 Syrian children of all ages.

Harran is divided into small neighbourhood-like communities with names such as Peace, Brotherhood and Fraternity, alluding to universal values. Seen from outside, the camp seems like a prison, but the gates of the Harran camp are always open so that families can leave and visit shopping centres nearby.

The Syrians refugees living in Harran have tried to reproduce the lifestyle they had in their homeland, but every family has a sad story to tell – many have lost relatives in the conflict and others still have members in the battlefields fighting the regime.

Professor Helit showed IPS the classrooms and common areas frequented by Syrian students aged between 13 and 16, the walls decorated with paintings by the students which, he said, are an “expression of their feelings and pain.”

“We will never stop fighting for our independence,” he added. “We will resist until the end.”

Stories like that of Professor Helit can be found everywhere in refugee communities along the border, although not all have the “luxury” of container housing. 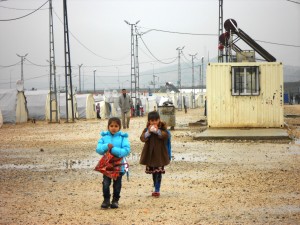 Syrian children going to school on a cold morning in the tent refugee camp in Nizip, Turkey, near the border with Syria. Credit: Fabíola Ortiz/IPS

In most camps, like the one in Nizip in the province of Gaziantep – an important industrial city in eastern Turkey – families of up to eight people live in tents.

Nizip lodges 10,700 Arabic Syrians, mostly from Aleppo and Idlib – both towns which were targeted by the al-Nusra Front, which is affiliated with al-Qaeda.

But the Nizip camp is also the setting for an interesting initiative in which its residents are being given the chance of electing their own neighbourhood community representatives. This pioneering initiative is now in its second year.

“This was the first time I ever voted. I don’t understand much about how it works but in Syria there was only one candidate and didn’t matter if we voted or not because the result was already defined”, Mustafa Kerkuz, a 57-year-old Syrian refugee from Aleppo, told IPS.

According to Demir Celal, assistant director of the Nizip camp, this is the first time that Syrians have able to vote freely. “We aim to teach them what a free election looks like,” he said.

The number of Syrian refugees in Turkey now stands at two million, according to Veysel Dalmaz, head of the Prime Ministry’s General Coordination for Syrian Asylum Seekers, who warns that the country has nearly reached full capacity for humanitarian assistance even though Turkey has “an open door-policy in which no one coming from Syria is refused and we do not even discriminate which side they are on.”

So far, the Turkish government has allocated more than five billion dollars to humanitarian aid through the Disaster and Emergency Management Authority of Turkey (AFAD).

According to Dalmaz, there has never in history been a case of mass migration from one country to another in such a short period of time as the migration from Syria to Turkey, and “there is no country that has managed to absorb so many people in so little time.”