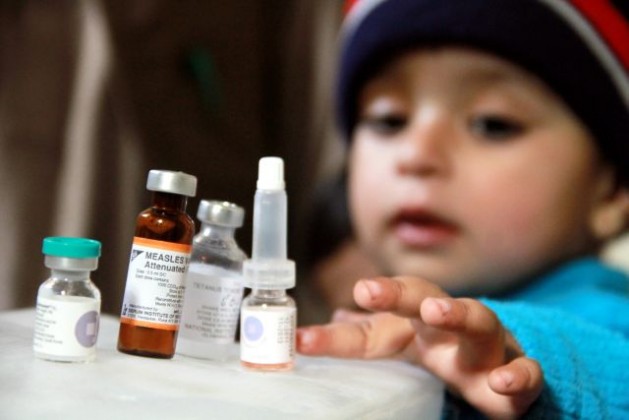 “In situations where there is a higher mortality and morbidity, people very often still see on a day to day basis the impact of vaccination.” Jos Vandelaer, UNICEF. Credit: Adil Siddiqi/IPS

UNITED NATIONS, Feb 5 2015 (IPS) - Measles remains one of the leading causes of death for young children worldwide, even though a safe vaccine is available.

Most of the 145,700 people who died from measles in 2013 were children under the age of five, according to the World Health Organization (WHO).

"These kids face a double whammy, in that if they don’t get immunised and they fall sick their chance of getting treatment is also lower than an average kid.” -- Jos Vandelaer of UNICEF

However, immunisation has also saved many children from death and serious illness. The WHO estimates that 15.6 million deaths were prevented between 2000 and 2013, because of increased access to the measles vaccination.

Jos Vandelaer, prinicipal advisor on immunisations for UNICEF, the United Nations children’s agency, told IPS that the children most at risk of missing out on vaccinations are among the world’s most vulnerable and disadvantaged, including children from minority backgrounds and displaced or refugee children in temporary accommodation.

“These are the very same kids who also don’t have access to health care, to clean water, to hygiene, to school, and so on,” he said.

“So these kids face a double whammy, in that if they don’t get immunised and they fall sick their chance of getting treatment is also lower than an average kid.”

In light of the recent outbreak of measles in the United States, Vandelaer spoke to IPS about some of the differences in communicating the importance of vaccination in developed and developing countries.

“In situations where there is a higher mortality and morbidity, people very often still see on a day to day basis the impact of vaccination. If you still have a lot of measles around, people will understand that vaccinating the child will protect the child,” Vandelaer  explained.

“That is probably less visible in situations where you have higher coverage and the diseases are less prevalent. People start to see less of the benefit of immunisation, because they don’t see the disease anymore,” he said.

“What we start seeing, as has also been in the press here in the United States, or in some European countries, these are often the people who are higher educated who are having objections against immunisations, it is not a matter of not being informed, but it is a matter of being misinformed,” he said.

Vandelaer also spoke about the importance of herd immunity.

Within any society there are always a small number of people who cannot be immunised, including the very young and children with compromised immune systems from cancer or other illnesses. These children rely on what is called herd immunity to protect them from vaccine-preventable illnesses.

As Vandelaer explained, “If you get above a certain threshold with immunisation, you protect a large number of kids, and if you do that and you manage to be above that threshold, you have enough children protected to make life for the virus difficult enough to find the few kids who are not protected.

“When there are very few un-immunised children they are actually protected by the children around them. That is why it is important to vaccinate, not just to protect individuals, but also to protect the group.”

Vaccine prices in some markets shrouded in secrecy
As the biggest purchaser of vaccines worldwide UNICEF is committed to transparency and publicly publishes the prices it pays for vaccines online.
Kate Elder, Médecins Sans Frontières (MSF) Access Campaign policy advisor, spoke with IPS about the cost of vaccines to governments and the need for greater transparency in the vaccine market, particularly for middle income governments who purchase directly from suppliers.

Elder explained that governments voice their concerns about the high prices of vaccines at the World Health Assembly every year.

Governments of the world’s poorest countries can access vaccines through the GAVI Vaccine Alliance, of which UNICEF is a member. These governments are required only to make a small copayment, and GAVI covers the rest of the cost, through donated funds.

However many of the world’s poorest people now live in middle-income countries, and their governments usually purchase vaccines directly from manufacturers, in a market shrouded in secrecy.

While compiling their latest report, MSF Access contacted governments and vaccine producing companies to ask for information about how much vaccines cost.

Elder said that none of the vaccine producing multinational corporations MSF Access contacted provided any data on how much they charged for vaccines and that they actually “[took] great lengths to conceal whatever price information possible”.

The companies did all tell MSF Access that they used a tiered pricing structure, so theoretically this should mean poorer countries pay less than richer countries to access vaccines.

Elder explained that one of the reasons MSF Access believes that vaccine prices should be made publicly available is because the data they did receive from governments did not necessarily reflect the tiered pricing structure that the vaccine manufacturers claim to use.

“When you actually look at the [limited] data, and look at the prices governments are paying vis-à-vis their economic level there isn’t this classic line,” Elder explained.

Another issue effecting vaccine supply is having a healthy market, preferably without monopoly or duopoly situations. MSF Access report that there is currently only one manufacturer (Serum Institute of India) who produce 80 percent of the supply of the measles vaccine and who are also the only WHO prequalified manufacturer of the MR vaccine (the combined measles and rubella vaccine).

This has actually resulted in a price increase for the MR vaccination, which the WHO now recommends as part of the basic vaccination package, and places a worryingly heavy reliance on a single manufacturer.

While UNICEF and the United States government both publish what they pay for vaccines, they are rare exceptions. Elder says that greater transparency is needed across the board so that taxpayers from the donor countries who support GAVI and middle income countries who buy their vaccines directly, know how much vaccines are costing their governments.