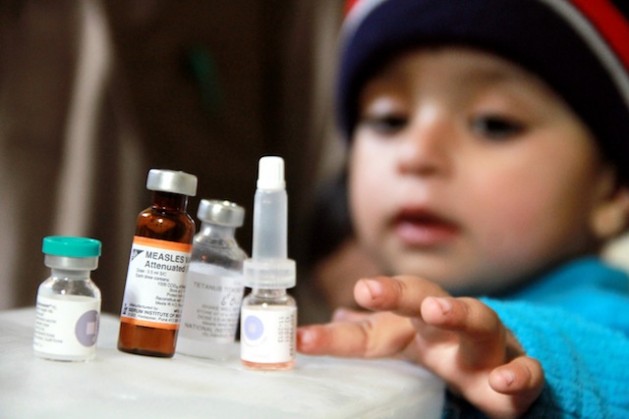 A mass measles vaccination campaign is finally being carried out in eight districts of Sindh in Pakistan. Credit: Adil Siddiqi/IPS.

KARACHI, Jan 12 2013 (IPS) - It came as no surprise to Dr Zulfikar Ahmad Bhutta, a leading child expert at the Aga Khan University in Karachi, that an outbreak of measles has claimed the lives of more than 300 children in Pakistan. “The tragedy was in the offing,” he said, putting the blame squarely on the abysmally low coverage of routine immunisation against childhood diseases.

“Pakistan’s routine immunisation coverage is about 65 percent with only some important cities of Punjab recording a better performance,” the World Health Organisation’s Pakistan head, Dr Guido Sabatinelli said in a press statement..

The global health agency, too, notes that the huge difference in routine immunisation coverage between the provinces, districts and cities is at the root of the measles outbreak.

The government has started a mass immunisation campaign from Jan. 1 for children aged nine months to 10 years in eight districts of Sindh.

WHO spokesperson Maryam Younas told IPS that 1.3 million vaccine doses have been dispatched to a target population of 2.9 million.

A contagious respiratory infection caused by a virus, measles is passed on by a cough or a sneeze. The most common symptoms, said Dr Mohsina Noor at Karachi’s National Institute of Child Health (NICH), include fever, cough, and sore eyes. A rash develops over three to four days, which starts on the face and head and spreads down the body.

The children’s hospital is getting five or six complicated cases every day on average.

It takes two doses of a cost-effective and safe measles vaccine, available since 1960, to protect a child against measles. Yet it remains a killer worldwide, says WHO.

Bhutta, a member of the independent expert review group for maternal and child health for the United Nations Secretary-General, told IPS that neighbouring Bangladesh, Nepal and India had succeeded in eradicating measles.

“Even in Afghanistan no major measles outbreaks have been seen recently,” he said.

Pakistan is among the ten countries that account for almost two-thirds of the world’s un-immunised children. The other nine are India, Nigeria, D.R. Congo, Uganda, Ethiopia, Afghanistan, Kenya, Niger and Mozambique.

According to the United Nations Children’s Fund (UNICEF), one in ten children in Pakistan dies before reaching the age of five, a majority of them of vaccine-preventable diseases.

Provincial health minister Dr Saghir Ahmed acknowledged to IPS that with a field force of just 2,448 vaccinators across Sindh, manpower was stretched, with only “one vaccinator per every health centre, including government-run basic and rural health centres as well as big hospitals in the city.”

Dr D.S. Akram, a paediatrician heading HELP, a non-governmental organisation working on maternal and child health in several districts of Sindh, told IPS that “vaccinators distribution is unequal as many are political appointees and do not attend to their duties.”

Further, she said: “Almost none of the vaccinators are doing outreach into villages as there are not enough of them and they do not have fuel or vehicles to go for outreach.”

The outbreak casts serious doubts over official claims that 82 percent of under-fives in Sindh are immunised.

“These figures are an overestimate and in measles vaccination it is around 50 percent at best,” said Akram who is calling for third party evaluation.

A national immunisation coverage survey conducted in 2011 which included blood testing for tetanus and measles showed that only 50 to 55 percent of infants were protected using antibodies.

Qadir Baksh Abbasi, the focal person for measles in the EPI told IPS over phone from Islamabad that after the devolution in 2010 health became a provincial subject, but the centre has continued to provide vaccine and all logistical support to Sindh.

“But the province never bothered to inoculate the children. If they had, we would not have seen this outbreak,” said Bhutta. “The programme in Sindh is remarkably inefficient; it lacks transparency, accountability and adequate monitoring.”

He said there was a need to know what happened to all the vaccines sent from the centre to the provinces.

The situation in Sindh, said Bhutta, may have been compounded by high rates of malnutrition. Citing the National Nutrition Survey of 2011, he said over half of all under-five children in rural Sindh were moderate to severely stunted and a similar proportion were vitamin A deficient. These factors, he said, could have affected case fatality rates from measles infection.

Many experts have long held that with much money and political commitment directed towards eradication of polio, routine immunisation took a backseat.