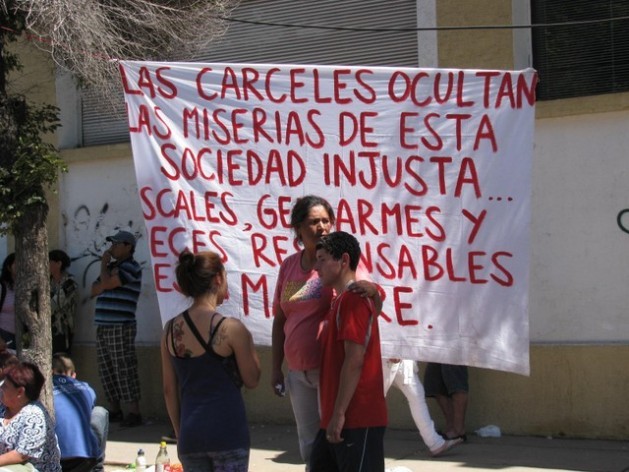 “The prisons hide the miseries of this unjust society….” Relatives of the 81 inmates who died in a blaze in the San Miguel prison in Santiago, Chile are demanding justice for the victims. Credit: Courtesy of Desconcierto.cl

SANTIAGO, Feb 2 2015 (IPS) - In Latin America’s prisons, notorious for extreme overcrowding and violence, inmates live in constant danger of being killed – a contradiction in a region where virtually every country has abolished the death penalty.

“In many Latin American countries, a prison sentence can become a death sentence in practice,” said Amerigo Incalcaterra, regional representative for South America of the United Nations Office of the High Commissioner for Human Rights (OHCHR).

The abolition of capital punishment has a long tradition in this region. Venezuela was the first country in the world to do away with the death penalty, in 1863, and Costa Rica was the third country to do so, in 1882. Only two countries in the region still have the death penalty on their books: Cuba and Guatemala, where the last recorded executions were carried out in 2003 and 2000, respectively.

But the progress made on that front stands in sharp contrast with the appalling conditions in Latin America’s prisons, where human rights organisations and experts warn that the situation is grave.

High levels of violence, numerous murders and other crimes inside the prison walls, and serious human rights abuses are some of the problems in penitentiaries in the region, they report.

“In Latin America the prison systems face chronic problems which have not been adequately addressed, let alone resolved, by governments,” Incalcaterra said in an interview with IPS.

Olga Espinoza, the head of the area of penitentiary studies in the University of Chile’s Centre for Citizen Security Studies, also said the region’s prison systems are in a state of crisis.

“States and society in general must become aware that the prison crisis in their countries not only affects people deprived of their liberty, but also their families and society as a whole.” -- Amerigo Incalcaterra

“The latest report by the United Nations Development Programme provides very concrete data on the conditions of overpopulation and overcrowding, disproportionate numbers of inmates in preventive custody, fragile institutions in many countries, and difficulties in the effective implementation of social reinsertion programmes,” Espinoza told IPS.

One of the worst cases is Venezuela, where prison violence is extreme, with clashes involving firearms, explosives and other weapons, experts note.

In Venezuela, with a total prison population of 53,000, the authorities reported to the OHCHR that 402 inmates were killed in the first 11 months of 2014. The U.N. agency reports that overpopulation in the country’s prisons stands at 231 percent, although the government argues that there is no overcrowding in 87 percent of the prisons.

In the case of Brazil, human rights groups report cruel, inhumane and degrading conditions in the prisons, and there are numerous reports of torture, such as practices like asphyxiation with plastic bags, beatings and electric shocks.

Members of the military police are involved in the majority of cases, they say.

“However, Venezuela and Brazil are not isolated cases, but form part of a generalised pattern in the region,” Incalcaterra said.

“Certainly, both countries are facing serious challenges of prison violence and lack of state control in certain cases, as reported by several independent United Nations mechanisms,” he said.

“But no country in the region is free of the problems of overcrowding, precarious detention conditions, lack of access to basic services, and cases of mistreatment and torture,” he added.

The chronic problems facing the region’s penitentiary systems include severe overcrowding due to the systematic use of prison sentencing rather than alternative measures, and a lack of adequate infrastructure, Incalcaterra said.

To that is added “the lack of access to basic health services and adequate food, and general prison conditions that do not meet minimal international standards,” the OHCHR representative said.

“This situation fuels prison violence, including cases of torture, and directly affects the integrity and dignity of people deprived of freedom,” he said.

According to a report by the Inter-American Commission on Human Rights, there were 943,000 people in prison in the region in 2013, 354,000 of whom were in preventive detention, awaiting trial or sentencing.

The most critical cases were those of Bolivia, where 84 percent of the prison population has not yet been sentenced, followed by Paraguay (73.1 percent), Panama and Uruguay (65 percent), Peru (58.8 percent), Venezuela (50.3 percent) and Guatemala (50.3 percent).

As a result, tragedies happen, such as the one that occurred on Dec. 8, 2010 in Chile, the worst in the history of the country’s prisons. In the fire, 81 inmates died, most of whom were first-time offenders in prison for minor crimes.

The San Miguel prison had at the time a population of 1,875 and a capacity for just 632 prisoners, which meant overpopulation of 197 percent.

In 2012 the government created the unit for the protection and promotion of human rights in the gendarmerie – the institution in charge of Chile’s penitentiaries – to reduce mistreatment and torture in the country’s prisons.

But according to the annual human rights report of the Diego Portales University, the advances seen in terms of prison policies are far from an integral public policy that would lead to meeting the basic needs of prisoners and to improving compliance with international human rights standards.

Incalcaterra said these situations arise from the fact that “the prison crisis is not a priority on the agendas and programmes of governments in the region.”

The OHCHR official said there is a lack of transparency and regular and independent oversight in prisons, as a fundamental tool to prevent torture and mistreatment and to bring about structural improvements in prison systems.

And although people deprived of their liberty are one of society’s most vulnerable groups, “they are also one of the most unpopular,” he added.

Espinoza said that in the last five years, reforms have been carried out in countries in the region, aimed mainly at providing stronger institutions for the prison systems.

But the crisis, she said, makes it necessary to consider measures that would help bring about definitive solutions in the medium to long term. For example, she mentioned the need to design public policies in the area of security containing social reinsertion components as a key to guaranteeing success in their implementation.

Incalcaterra added that “states and society in general must become aware that the prison crisis in their countries not only affects people deprived of their liberty, but also their families and society as a whole.”

“Prisons are the reflection of a society,” he concluded.