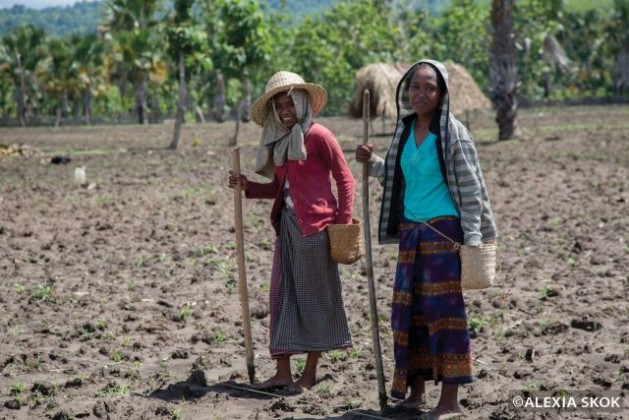 UNITED NATIONS, Mar 6 2015 (IPS) - In Timor-Leste, the gap between rich and poor is most keenly felt by rural women and children. But while women are working hard to help rebuild Timor-Leste, their contributions are not always recognised, in a country where men’s narratives still heavily dominate.

Ahead of International Women’s Day, IPS looks at some of the challenges and achievements Timorese women have experienced since the small island country gained independence in 2002.

“Wawata Topu are the living example that women's roles are not marginal at all." -- Enrique Alonso

Timor-Leste is an island nation, with its heart in its sacred mountains, known as the ‘foho’. The foho were home to Timor-Leste’s resistance fighters who defended their country during 24 years of violent Indonesian occupation.

Bella Galhos was one of those resistance fighters. After her brothers were murdered and her father tortured by the Indonesians, she infiltrated their army, gaining their trust until they sent her as a student ambassador to Canada. Once in Canada she defected, travelling through North America and raising awareness about the atrocities in her home country.

Since returning home in 1999, Galhos has become an advocate for Timor-Leste’s women and children, as well as the environment.

She is speaking Friday in the national capital Dili at a special event ahead of International Women’s Day on Mar. 8.

Galhos spoke with IPS about her new project, a green school in the mountain village of Maubisse. “I have very profound reasons why I came to Maubisse,” Galhos told IPS in a phone interview earlier this week. “First is because of my mother who passed away last year, she was a great teacher.”

“This place where I actually started this project, was known to be the first female school in the area. I didn’t want to lose that value that my Mum started (here) a long long time ago,” Galhos said. “Growing up in this country I’m also aware very much that the issue of environment is not considered an important issue. And I’m afraid that in the long run we are actually going to have a big problem in this country.”

For this reason, Galhos has started her environmental project in Maubisse, using a social-enterprise model.

“I want to give the kids a place where they can come and learn about growing fruits and vegetables,” she told IPS. She also hopes to teach them “life skills such as peace, love, kindness, not only towards our environment but also towards people.”

Galhos says that women in rural Timor-Leste face many challenges, including a lack of access to the information they need, a lack of health care services and domestic violence.

She said that poverty in the rural areas where most people still live a subsistence lifestyle can be seen at many levels.

“The children’s malnutrition, you can really look at them and see that these people do not have enough food or they do not have food with protein or vitamins. You can really see it in the way they look,” she said.

Galhos says that an office job in the capital Dili is not for everyone, as can already be seen with many rural people coming to the capital struggling to find work.

She hopes that her project will become self-sustaining as a social enterprise, by capitalising on the areas beauty and international eco-tourism potential.

However, she is disappointed that the government has not responded to her requests for financial support, after eight months of submitting her proposals to many different departments.

“It’s not easy at all. There are huge obstacles. As a woman in a country that’s male dominated, basically I do not have a place where I can turn to,” she said. Timor-Leste’s government has set aside revenue from the country’s share of oil reserves in the Timor Sea, to help fund the country’s development.

However, there are concerns that the funds from the oil are increasingly concentrated in the hands of a few and are not reaching the rural poor, or women.

Galhos has so far funded the green school project with her own salary and with support from her friends overseas. She is disappointed her requests for funding from the government have not been taken seriously.

“I don’t see many Timorese women trying to do what I’m doing, being successful in getting government support,” she said. “Though I still have a very pessimistic feeling towards the current government I am still working on getting them to see.”

This is real social and economic development for the benefit of all people, especially for people in the Maubisse area, she said.

In another part of Timor-Leste women divers are challenging dominant narratives, that don’t value women’s work.

The women divers of Adara on Atauro island have reached a worldwide audience through the short film Wawata Topu. The film was last week awarded best foreign documentary at the American Online Film Awards in New York.

IPS spoke with Enrique Alonso, who co-directed and co-produced the film, along with David Palazón.

“If you review the available bibliography on the role of women in the Timor-Leste fisheries sector, you will find that women are missing,” Alonso told IPS. “Some reports developed in the last years shed some light, but for the most part (the women) were totally invisible.

“All along the country you might find that women in the fishing communities have a crucial role in households’ income management, livestock rearing and craft making, post harvest and fish drying, they participate in seasonal shore fishing (such as the sea worms harvest) and mostly in shellfish gathering and reef gleaning.

“There is one specific report of a study conducted in the east side of the main island where the researchers define women’s roles in the fisheries as ‘marginal’.”

“Wawata Topu are the living example that women’s roles are not ‘marginal’ at all,” Alonso said. “The film shows that their work is of primary importance not only in regards the provision of food but also in the market chain.”

Alonso says that the women of Adara have to walk for hours every Saturday to get to the market to sell their fish.

“They are the ones who transport and sell the fish, caught also by men, to the market every week. They are the brokers upon which the incomes of many families depend. The kids have to walk around one hour to get to the school through the rugged coastline. If it rains it is too risky for them to go,” he said.

“These are tough conditions. Within this context, these diver women are among the most vulnerable groups.”

The film documents how the women of Adara have adapted to the tough conditions and broken down gender barriers by becoming spear fishers themselves.

“As Maria the pioneer diver explains in the film, she started to fish because she was hungry. She challenged the social barriers and joined men in speargun fishing,” Alonso explained.

The film has helped women by giving them narrative with which to challenge unfair power structures.

“Through the film (women) raised their voice and got heard,” Alonso said.

“Power is also about discourse and narrative, and in challenging power the narrative games are crucial,” he said.

The film has been screened widely, including at International Women’s Day events around the world.

The most important event occurred at the National Day of Timorese Women, Alonso said.

This article is also available in Portuguese