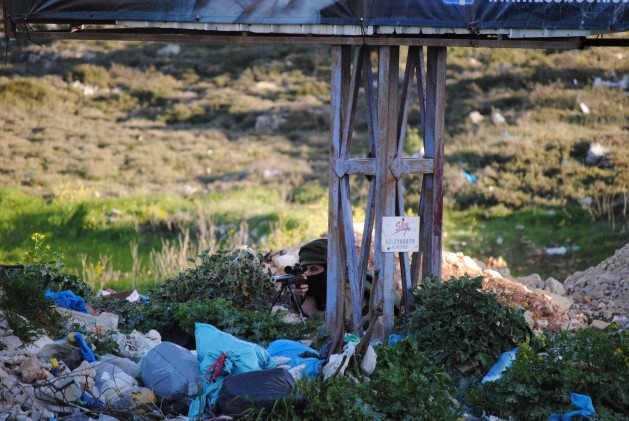 RAMALLAH, West Bank, Mar 27 2015 (IPS) - A Palestinian youth lost his fight for life this week after lying critically injured in Ramallah Hospital for days after Israeli soldiers used live ammunition as a method of crowd control against stone-throwing Palestinians near a Palestinian refugee camp.

Seventeen-year-old Safi was shot last week by an Israeli sniper armed with a Ruger rifle during clashes between Palestinian youngsters and Israeli soldiers.

The bullet which hit him was a 0.22 inch calibre bullet, which is considered less lethal than ordinary bullets of 5.56 mm calibre.

“Many of the wounded have been shot at close range and it appears as if the soldiers are shooting to kill. In my five years as a surgeon, the situation has been getting progressively worse, especially lately” – orthopaedic surgeon Dr Ahmed Barakat

There has been a recent increase in the use of this kind of bullet against Palestinian demonstrators by the Israeli Defence Forces (IDF) despite disagreement within the Israeli military about the use of this controversial weapon for riot control when the lives of Israeli soldiers are not endangered.

The head of Israel’s security department in the Operations Directorate stated in 2001 that the Ruger could not be considered a non-lethal weapon and could only be used in circumstances which justified the use of live fire.

Due to the large number of Palestinians injured and killed by 0.22 bullets, the use of this ammunition was suspended during the second Intifada, or uprising, from 2001 to 2008.

However, they are once again being used by the Israelis and the number of Palestinians seriously injured by them is growing, with at least two deaths in the last several months.

“Recent months have seen a dramatic rise in Israeli security forces’ use of live 0.22 inch calibre bullets. The firing of this ammunition is an almost weekly occurrence in the West Bank in sites of protests and clashes,” reported Israeli rights group B’tselem in January.

“Most of those injured have been young Palestinians, including minors. Yet, in the last two months, one Palestinian woman, at least three photographers, and a foreign national who was taking part in a demonstration were also hit by these bullets,” said B’tselem.

The humanitarian organisation has also said it witnessed cases of Israeli soldiers provoking clashes in order to fire live ammunition at protesters.

The reintroduction of this controversial weapon prompted B’tselem to complain to Israel’s Military Attorney General (MAG), who responded confirming that “the Ruger and similar means are not classified by the IDF as means for dispersing demonstrations or public disturbances.”

Dr Naghli told IPS that the Israeli soldiers are also using a kind of bullet which fragments on impact, causing severe trauma and damage to bones, organs and nerves, although he could not confirm if this was a 0.22 or another type.

“During the last three months there have been over 40 wounded from these types of gunshots,” said Naghli.

Over the last few weeks, IPS has witnessed Israeli snipers firing repeatedly at Palestinians during several clashes in the West Bank when stones thrown landed at a distance away from the soldiers presenting no danger.

IPS also visited some of the wounded in Ramallah Hospital and spoke to orthopaedic surgeon Dr Ahmed Barakat who was treating them.

“Many of the wounded have been shot at close range and it appears as if the soldiers are shooting to kill. In my five years as a surgeon, the situation has been getting progressively worse, especially lately,” Dr Barakat told IPS.

In a related development, the IDF has also temporarily suspended the use of attack dogs when arresting Palestinians, most accused of stone-throwing.

This follows a video, which went viral and caused an outcry, of 16-year-old Hamzeh Abu Hashem, 16, of Beit Ummar near Hebron in the southern West Bank, being savaged by two dogs as soldiers arrest him.

A subsequent IDF investigation found that while the use of dogs in confrontations “could be justified, in the case in question, the youth could have been arrested using other means.” Abu Hashem has been incarcerated since the incident.

Meanwhile, torture of Palestinians in detention by Israeli security services has been on the rise since the second half of 2014, according to the Public Committee Against Torture (PCAT) in Israel, an attorney representing Palestinian prisoners and Israel’s left-leaning Haaretz daily.

“In years past there were a few rare cases of torture. But something has changed,” the attorney told Haaretz.

In all of 2014, 23 Palestinians filed a number of complaints of torture by the Shin Bet (Israel’s domestic intelligence agency).

Until 1999, thousands of Palestinian prisoners were tortured every year. PCAT estimates that most Palestinians questioned had experienced at least one kind of torture.

In September 1999, following a petition to the High Court of Justice, the court prohibited the systematic use of torture, but left a small opening for interrogators

This opening applied to cases known as “ticking time bombs” where the use of force is permitted to obtain crucial information.

However, critics have pointed out that what constitutes a “ticking time bomb” is open to interpretation as well as the fact that Palestinian prisoners who have been tortured have sometimes given false information just to stop the torture.