“We live in a globalised world, let us globalise human compassion, ” Satyarthi told an audience at the United Nations Tuesday. 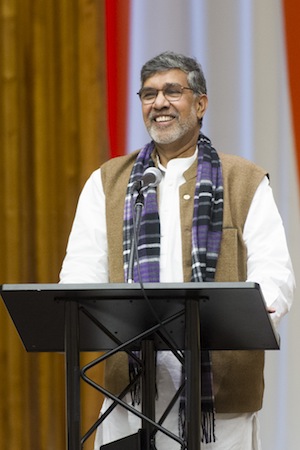 Satyarthi, a tireless activist against child labour, received the Nobel Peace Prize in 2014 together with Malala Yousafzai “for their struggle against the suppression of children and young people and for the right of all children to education.”

Satyarthi said that he was confident that he would see the end of child servitude in his lifetime but emphasised that everybody had a moral responsibility to address the issue.

In South Asia 250,000 children, some as young as four, work up to eighteen hours a day tying knots for rugs that are exported to the U.S. and Europe.

In Haiti, UNICEF estimates that 225,000 children, mostly girls, between the ages of five and 17 live as ‘restaveks’, live-in domestic servants with wealthier families.

In the Central African Republic, the U.N. reports there are some 6,000 child soldiers, including young girls used as sex slaves.

Worldwide more than half of all child labourers work in agriculture, including in the United States where Human Rights Watch reports children working on tobacco farms are exposed to nicotine poisoning.

In total, the International Labor Organization reports that there are 168 million children in child labour, and that more than half of them, 85 million, are in hazardous work.

Satyarthi said that behind every single statistic there is a cry for freedom from a child that we are not listening to.

Satyarthi contrasted the number of children in full time work with the 200 million adults who are jobless worldwide. He explained that addressing this imbalance was a complex issue, in part because in vulnerable populations children were seen as easier to exploit than adults.

Satyarthi also expressed concern that while progress has been made on child labour, the more heinous crime of child slavery has stagnated.

“The number of child slaves, the children in forced labour has not reduced at all”

He said the number of child slaves worldwide had stagnated at 5.5 million for the past fifteen years.

Satyarthi said that the United Nations played a key role in addressing child labour. He emphasised that there needed to be clear language on tackling child labour in the Sustainable Development Goals (SDGs).

He also called for greater cooperation between organisations working to protect children to ensure a holistic strategy.

Also speaking at the event, Susan Bissell, UNICEF Chief of Child Protection said, “The first line of defense against falling victim to slavery is the child and his or her family.”

“By empowering families socially and economically and building their resilience to recognise child slavery, and being aware of their rights and how to exercise them, we can deliver a first strong blow against slavery,” she said.

Bissell also called on the private sector to stamp out child slavery, saying that children’s rights should be seen as a relevant business mandate.

Satyarthi concluded his speech with a strong call to action.

“I refuse to accept that some children are born to live without human dignity,” he added. “Each one of you has some moral responsibility. It cannot go on me alone.”