Stephen Leahy is co-winner of the 2012 Prince Albert/United Nations Global Prize for reporting on Climate Change and author of critically-acclaimed new book: Your Water Footprint: The Shocking Facts About How Much Water We Use To Make Everyday Products (Firefly Books). 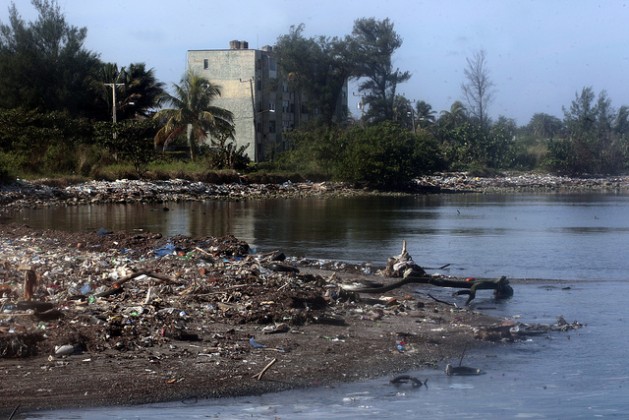 The Quibú River, running through the El Náutico neighbourhood in Havana, is always full of garbage. Credit: Jorge Luis Baños/IPS

UXBRIDGE, Canada, Mar 26 2015 (IPS) - Pollution is likely to be the most pressing global health issue in the coming years without effective prevention and clean-up efforts, experts say.

One study found newborn babies are contaminated with an average of 212 different chemicals.

Development and rising pollution levels remain closely linked, as clearly evidenced in China and India. However, the Sustainable Development Goals (SDGs) offer a major opportunity to curb pollution and turn economies around the world towards clean and green development pathways.

“The key to development and improving the health of everyone requires new, clean approaches to economic development,” said Fernando Lugris, ambassador and director general of political affairs with the Ministry of Foreign Affairs of Uruguay.

“You can’t ignore the global impact of toxic chemicals in the SDGs,” Lugris told IPS.

At least 143,000 man-made chemicals have been registered, with the majority untested for potential health impacts. In addition, the world generates more than 400,000 tonnes of hazardous waste every year, writes Julian Cribb in “Poisoned Planet: How constant exposure to man-made chemicals is putting your life at risk”.

Fresh snow at the top of Mount Everest is too polluted to drink. One study found newborn babies are contaminated with an average of 212 different chemicals, Cribb has said.

The SDGs will be a new, universal set of goals, targets and indicators all countries are expected to use to frame their agendas and political policies from 2016 to 2030. These largely expand on the Millennium Development Goals (MDGs) in place between 2000-2015 which were focused on poor countries.

Although not all of the MDGs have been achieved, they were crucial in focusing development aid and policies and a highly visible yardstick to measure international efforts.

The 17 proposed SDGs include targets to end poverty, eliminate hunger, attain healthy lives, provide quality education, attain gender equality and reduce inequalities. SDG 3 to “Ensure healthy lives and promote wellbeing for all at all ages” has a specific pollution reduction target:  “by 2030 substantially reduce the number of deaths and illnesses from hazardous chemicals and air, water, and soil pollution and contamination”.

“The target is great but we are troubled by the currently proposed indicator,” said Richard Fuller of Pure Earth, an NGO formerly known as the Blacksmith Institute, which helps to clean up toxic waste sites in the poorest countries.

Pure Earth is also part of the Global Alliance on Health and Pollution (GAHP).

Indicators in the SDGs are tools or methods to measure the progress in achieving the target. Having the right indicators are the key to knowing if the goal has been achieved, Fuller told IPS.

However, there is time to change that. The SDGs won’t be approved until the U.N. General Assembly  Sep. 25-27. The U.N. Statistical Commission that is preparing indicators for all 17 SDGs and the 169 targets has said it can’t complete its work until March 2016.

The Global Alliance on Health and Pollution (GAHP) along with UNEP, Sweden, Germany, Uruguay have proposed a more comprehensive set of indicators based on measures of death and disability under the “Global Burden of Disease” methodology.

Despite the well-understood reality that exposure to pollution has serious impacts on health, it can be difficult to quantify.  The World Health Organization and Institute for Health Metrics and Evaluation have developed a way to measure the overall health impacts of disease or pollution using disability-adjusted life years (DALY).

“This is a well-accepted metric although it will have to be enhanced because it doesn’t cover the impacts of pollution in soils yet,” said Fuller.

GAHP has proposed that the pollution reduction indicator show the current the death and disability rates from all forms of pollution as measured against a 2012 baseline established using the Global Burden of Disease methodology.

“Pollution affects everyone and everything but awareness of the impacts is low,” said Lugris.

“This is the right moment to put this issue on the centre stage,” he said.