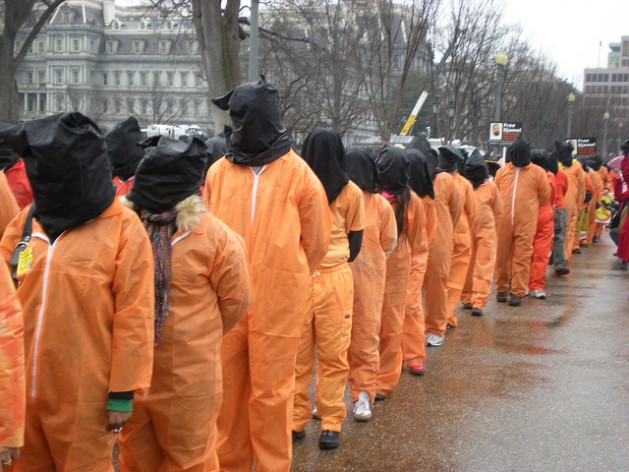 Protestors gather outside the White House to demonstrate against torture on the 10th anniversary of the opening of the U.S. prison facility at Guantánamo Bay, Cuba. Charles Davis/IPS

“One Government will thoroughly support women’s human rights and those of the lesbian, gay, bisexual and transgender (LGBT) community, but will balk at any suggestion that those rights be extended to migrants of irregular status. Another State may observe scrupulously the right to education, but will brutally stamp out opposing political views." -- United Nations High Commissioner for Human Rights Zeid Ra’ad Al Hussein
Addressing the opening session of the Geneva-based Human Rights Council (HRC) Monday, Zeid faulted member states for claiming “exceptional circumstances” for their convoluted decisions.

“They pick and choose between rights,” he pointed out, without identifying any member state by name.

“One Government will thoroughly support women’s human rights and those of the lesbian, gay, bisexual and transgender (LGBT) community, but will balk at any suggestion that those rights be extended to migrants of irregular status.

“Another State may observe scrupulously the right to education, but will brutally stamp out opposing political views,” he noted.  “A third State will comprehensively violate the political, civil, economic, social and cultural rights of its people, while vigorously defending the ideals of human rights before its peers.”

If every government that professed a commitment to human rights followed through consistently, she added, “we’d have a much different – and better – world.”

In an ironic twist apparently proving Zeid’s contention, U.S. Secretary of State John Kerry lashed out at the “appalling human rights record” of several nations, blasting Syria and North Korea while singling out human rights violations in Crimea and by separatists in Ukraine.

But he did not condemn the devastation caused by Israel’s 50-day aerial bombardments of Palestinians in Gaza last year nor the rocket attacks on Israel by Hamas.

The death toll in the Gaza bombings was 1,976 Palestinians, including 1,417 civilians and 459 children, according to figures released by the United Nations, compared with the killing of 66 Israelis, including two soldiers.

The Palestinians have accused Israel of war crimes and are pushing for action by the International Criminal Court (ICC) in The Hague: a move strongly opposed by the United States.

Kerry told the HRC the United States believes that it can continue to make progress and help the U.N. body fulfill its mandate to make the world a better and safer place.

“But for that to happen, we have to get serious about addressing roadblocks to our own progress. And the most obvious roadblock, I have to say to you, is self-inflicted,” he said.

“No one in this room can deny that there is an unbalanced focus on one democratic country,” he said, as he openly advocated the cause of Israel, one of the closest political and military allies of the United States.

And no other nation, he said, has an entire agenda item set aside to deal with it. Year after year, there are five or six separate resolutions on Israel, he told delegates.

This year, he said, there was a resolution sponsored by Syrian President Bashar al Assad concerning the Golan (which has been occupied by Israel since the 1967 war).

“How, I ask, is that a sensible priority at the very moment when refugees from Syria are flooding into the Golan to escape Assad’s murderous rule and receive treatment from Israeli physicians in Israeli hospitals?”

Kerry referred to the Council’s “obsession” with Israel, which, he argued, “actually risks undermining the credibility of the entire organisation.”

Zeid told the HRC the only real measure of a Government’s worth is not its place in the “solemn ballet of grand diplomacy” but the “extent to which it is sensitive to the needs – and protects the rights – of its nationals and other people who fall under its jurisdiction, or over whom it has physical control.”

Some policy-makers persuade themselves that their circumstances are exceptional, creating a wholly new reality unforeseen by the law, Zeid said, adding that such logic is abundant around the world today.

“I arrest arbitrarily and torture because a new type of war justifies it. I spy on my citizens because the fight against terrorism requires it. I don’t want new immigrants, or I discriminate against minorities, because our communal identity is being threatened now as never before. I kill without any form of due process, because if I do not, others will kill me,” he noted.

“And so it goes, on and on, as we spiral into aggregating crises,” Zeid declared.