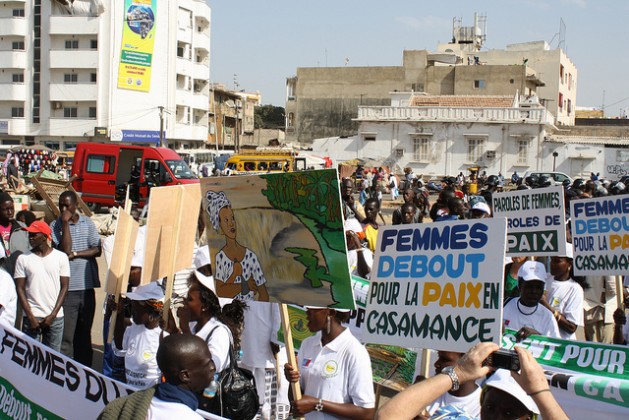 When armed conflict in the Casamance region of Senegal flared up afresh in December 2010, women organised a demonstration calling for peace. Credit: Abdullah Vawda/IPS TerraViva

UNITED NATIONS, Apr 27 2015 (IPS) - Governments have long pledged to bring more women to the peace table, but for many (if not most), it has been little more than lip service.

In a bid to accelerate this process, the Global Network of Women Peace-builders (GNWP) in partnership with the Permanent Missions of Chile and the Kingdom of the Netherlands to the United Nations organised an international workshop on Apr. 23 to better integrate the Women, Peace, Security (WPS) U.N. Security Council Resolutions within the security sector.

The seminar focused on recommendations for the implementation of Resolutions 1325 and 1820 at the international, regional and national level, in order to bring more women to the peace tables in conflict areas, and bring their perspectives into post-conflict reconstruction processes.

According to the 2014 Secretary-General’s report on WPS, a reform of the security sector is needed in order to accomplish these goals.

Speaking from U.N. Headquarters in New York, the International Coordinator of GNWP, Mavic Cabrera-Balleza, stressed “the need for a systematic implementation of Resolution 1325 at the international level.”

In the past three years, GNWP has conducted over 50 localisation workshops in 10 countries, in various communities and municipalities, inviting police officers and the military forces to learn about Resolution 1325.

“It is no surprise to us when they come to our localisation workshops that these officers hear about Resolution 1325 for the very first time. However, working only at the local level is hard, because final approvals come from the higher ups, in order to actually get a full reform and training of officers of the security sector,” highlighted Cabrera-Balleza.

The GNWP is not only calling for a global reform of the security sectors and armed forces for the inclusion of women in peace-building, but also for demilitarisation of countries and the elimination of conflicts to achieve peace worldwide.

Ambassador Anwarul Chowdhury, former under-secretary general and member of the High-Level Advisory Group for Global Study on Resolution 1325, who was present at the seminar, underlined the inadequacy of governments and peacekeepers in protecting civilians, and especially women, in recent years.

“(We need) the integration of the culture of peace and non-violence in national and global policies, and education for global citizenship. We need a human security policy, and a more inclusive human way of thinking about our future, where women and men can share equally the construction of a safer and just world,” he said.

One positive example of the inclusion of women during peace negotiations comes from the Philippines.

“More and more women were allowed in, either as members of the bureaucracy or government, or civil society leaders, or academia members, and they have all been sitting at the peace table.”

“Not only because there were more women inside the negotiating tracks, but also women around the panels, who would be lobbying the government but also the counter party, making sure that diverse frameworks would be included in the text.”

Participating in the event were also officers from police and military forces from Argentina, Australia, Burundi, Canada, Colombia, Ghana, Nepal, countries which are implementing reforms within their security sectors at the local, regional and national level.