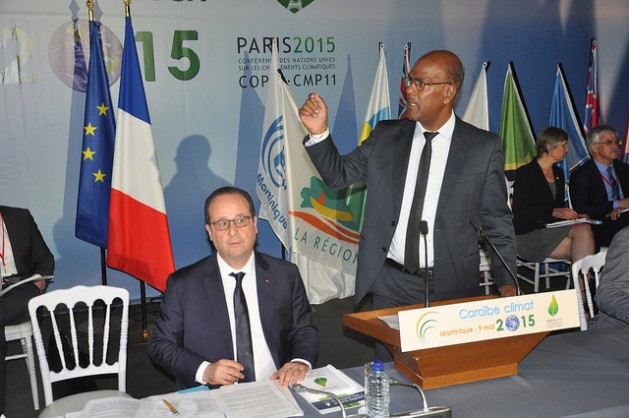 FORT-DE-FRANCE, Martinique, May 9 2015 (IPS) - Caribbean leaders on Saturday further advanced their policy position on climate change ahead of the 21st Conference of Parties, also known as COP 21, scheduled for Paris during November and December of this year.

The position of the Caribbean Community (CARICOM), 14 independent countries, was put forward by the group’s chairman, Bahamas Prime Minister Perry Christie, during a meeting here with French President François Hollande.

“For the Bahamas, which has 80 percent of its land mass within one metre of mean sea level, climate change is an existential threat." -- Bahamas Prime Minister Perry Christie

“The evidence of the impact of climate change within our region is very evident. Grenada saw a 300 percent loss of GDP (Gross Domestic Product) as a result of one storm,” Christie told IPS

“We see across CARICOM, an average of two to five percent loss of growth due to hurricanes and tropical process which occur annually.

“For the Bahamas, which has 80 percent of its land mass within one metre of mean sea level, climate change is an existential threat to our land mass. Indeed, that is the story across the region. And as I have said from place to place, if the sea level rises some five feet in the Bahamas, 80 percent of the Bahamas as we know it will disappear. The stark reality of that means, we are here to talk about survival,” Christie added.

Saturday’s summit gathered more than 40 heads of state, governments and Caribbean organisations to discuss the impact of climate change on the nations of the region.

The president of the Regional Council of Martinique, Serge Letchimy, said the summit goal is to give a voice to Caribbean nations on climate change through a joint statement, to be called “The Martinique Appeal”, to be heard at COP 21.

“Caribbean Climate 2015 is a push,” said Letchimy, “to vigorously encourage the international community to reach an agreement at COP21 to keep global warming below 2 degrees C. This is a crucial goal for Caribbean island nations that are particularly vulnerable to climate change and which only contribute 0.3 percent of global greenhouse emissions.”

Letchimy said Martinique is addressing the climate issue by aggressively implementing the Climate, Air and Energy Master Plan developed in cooperation with the French government.

In order to promote a more circular economy that consumes less non-renewable resources, the Regional Council of Martinique has also decided to go beyond the Master Plan with a programme called “Martinique – Sustainable Island.” The goal is to achieve a 100 percent renewable energy mix by 2030.

Dominica’s Prime Minister Roosevelt Skerrit said climate change is having a huge impact on the environment of his country, which in turn impacts on agriculture and the country’s eco-system.

“As you know we promote heavily ecotourism, and if action is not taken by the international community to halt greenhouse gas emissions we’re going to have a serious challenge,” Skerrit told IPS.

“We’re a coastal country and as the years go by you are seeing an erosion of the coastal landscape. You have a lot of degradation taking place. That has resulted in us spending tremendous sums of money to mitigate against that.

“Clearly, small countries like Dominica, and indeed the entire OECS do not have the kind of resources required to mitigate against climate change. We are the least contributors but we are the most affected,” Skerrit explained.

He said that out of this summit, Caribbean countries are hoping for a partnership with France to drum up support for the concerns of small island states like those in the OECS.

For the director general of the OECS, Dr. Didicus Jules, the impacts of climate change can be seen everywhere across the region, ranging from the rapid onslaught events like floods in St. Lucia, to the severity of hurricanes and erosion of beaches.

“It’s beginning to pose a huge threat as we saw in the case of St. Vincent and the Grenadines. The last event there, the damage was equivalent of about more than 20 percent of their GDP,” he told IPS.

“So just a simple event can set us back so drastically and that is why the member states are so concerned because these events have all kinds of downstream impacts on the economy, not just the damage and loss caused by the events themselves.” 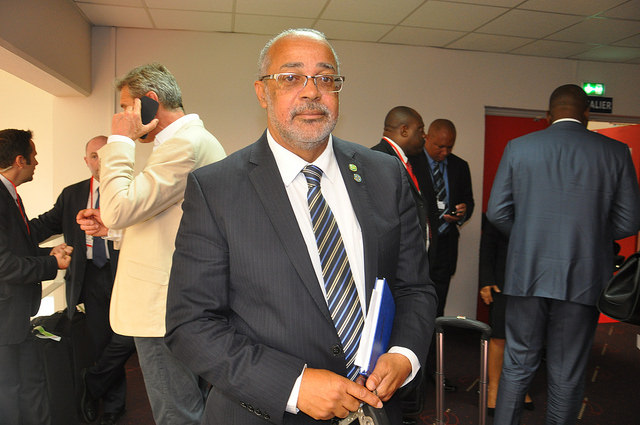 The trough on Dec. 24, 2013 brought torrential rains, death and destruction not only to St. Vincent and the Grenadines but to St. Lucia and Dominica as well.

In the last three years, St. Vincent and the Grenadines has been forced to spend more than 600 million dollars to rebuild its battered infrastructure. Landslides in April 2011, followed by the December 2013 floods left 13 people dead.

Jules said today’s meeting is unprecedented because France will be the chair of the COP meeting in Paris and it is perhaps the largest international event that the French president himself will personally chair.

COP21 will seek a new international agreement on the climate with the aim of keeping global warming below 2 degrees C. France and the European Union will play key roles in securing a consensus by the United Nations in these critical climate negotiations.

“He (President Hollande) wants this to be a success and use the opportunity to champion the voices of small island states given the French Republic’s presence in the OECS we felt that it was really a useful forum for having the voice of the Caribbean in this wider sense heard,” Jules said.

“That’s one of the reasons that we are now pressing hard with the French authorities to champion the cause of small island states so that the larger countries, those who are the biggest causes of the impacts on the environment take heed to what the scientists are saying.”

The CARICOM chairman said a satisfactory and binding agreement in Paris must include five essential elements.

These are, clarity on ambitious targets for developed countries, including a long-term goal for significant emission reductions; clarity on the adaptation measures and resources required to facilitate and enhance the sustainable development plans and programmes in small developing countries and thereby significantly reduce the level of poverty in these countries; and clarity on measures and mechanisms to address the development challenges associated with climate change, sea level rise and loss and damage for small island and low-lying coastal developing states.

Christie said it must also include clarity on how the financial and technological support both for mitigation and adaptation will be generated and disbursed to small developing countries.

“Further, it must be recognised that the existing widespread practice of using Gross Domestic Product per capita as the primary basis for access to resources simply does not address the reality of the vulnerability of our countries,” he said.