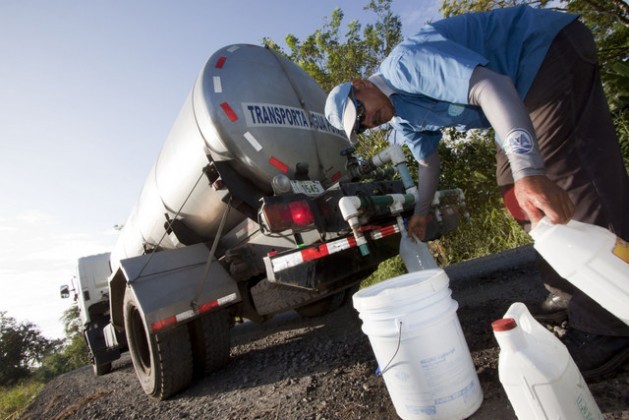 An employee of Costa Rica’s water and sanitation utility, AyA, fills the containers of local residents in Milano de Siquirres, who depend on water from tanker trucks because the local tap water has been polluted since August 2007. Credit: Courtesy Semanario Universidad

SAN JOSE, May 25 2015 (IPS) - Twelve years after finding the first traces of pesticides used by the pineapple industry, in the rural water supply, around 7,000 people from four communities in Costa Rica’s Caribbean region are still unable to consume their tap water.

The communities of Milano, El Cairo, La Francia and Luisiana are located in the municipality of Siquirres, 100 km northeast of the capital, San José, in an agricultural region where transnational corporations grow pineapples on a large scale.

For years the four towns have depended on tanker trucks that bring in clean drinking water.

“It’s hard,” the head of the Milano community water board, Xinia Briceño, told IPS. “And while the truck used to come every day, now it comes every other day. And when it breaks down, or there’s an emergency in some other place, or it’s a holiday, people go without drinking water for up to four days.”

Briceño, the president of the community association that runs the rural water system in Milano which serves some 1,000 families, is frustrated with the delay in resolving the situation. “As of next August we will have been dependent on the tanker truck for eight years.”

Since Aug. 22, 2007, these rural communities have only had access to water that is trucked in. They can’t use the water from the El Cairo aquifer because it was contaminated with the pesticide bromacil, used on pineapple plantations in Siquirres, a rural municipality of 60,000 people in the Caribbean coastal province of Limón.

“Chemicals continue to show up in the water,” Briceño said. “During dry periods the degree of contamination goes down. But when it rains again the chemicals are reactivated.”

The failure of the public institutions to guarantee a clean water supply to the residents of these four communities reflects the complications faced by Costa Rica’s state apparatus to enforce citizen rights in areas where transnational companies have been operating for decades.

The technical evidence points to pineapple plantations near the El Cairo aquifer as responsible for the pollution, especially the La Babilonia plantation owned by the Corporación de Desarrollo Agrícola del Monte SA, a subsidiary of the U.S.-based Fresh Del Monte.

But it is public institutions that have had to cover the cost of access to clean water by the local communities.

As a temporary solution, the public water and sewage utility AyA decided in 2007 to provide the communities with water from tanker trucks. Today, the local residents bring containers three times a week to stock up on clean water.

In nearly eight years, AyA has spent over three million dollars distributing water to the four communities, according to official figures. Briceño said a system to bring in water from another nearby aquifer could have been built with those funds.

“The idea is to build a water system to bring in water from a new source, in San Bosco de Guácimo. But that means piping it in from 11.7 km away,” Briceño explained.

The first evidence of the pollution was discovered in 2003, when the National University’s Regional Institute for Studies on Toxic Substances found traces of pesticides in the local water supply. Studies carried out in 2007 and subsequent years found that the water was unfit for human consumption.

The Supreme Court’s constitutional chamber ruled that the Health Ministry, AyA and several other public institutions should resolve the problem.

But the state has not managed to obtain compensation from pineapple producers for the environmental damage, as it has failed to carry out an assessment of the harm caused, and lawsuits filed in the environmental administrative court since 2010 are still underway.

“That is one of the delays we have had, because part of the process of bringing a complaint before the environmental administrative court is an economic appraisal of the environmental damages,” Lidia Umaña, the vice president of the court, told IPS. “Not all of the different authorities have the capability to conduct appraisals.”

The judge said that without an appraisal it is impossible to determine whether the companies must pay damages or not, and that “in this case like in any other a group of experts must be appointed to appraise the damages.”

After years of waiting for a solution, the case has gone beyond the borders of this Central American country, reaching the Inter-American Commission on Human Rights (IACHR). On Mar. 20 Briceño and other representatives of the affected communities, and delegates of the Environmental Law and Natural Resources Centre (CEDARENA), asked the IACHR to intervene.

“The IACHR is currently preparing a report on the human right to water and they told us they would include this case,” said Soledad Castro, with CEDARENA’s integrated water management programme, which is supporting the communities in their complaint before the Washington-based regional human rights body.

In remarks to IPS, Castro complained about the state’s inertia in solving the problem. In her view, “only AyA has made an effort, bringing in water trucks at an extremely high cost. Although it hasn’t been sufficient, at least AyA did something. The rest have been conspicuously absent.”

The case has also drawn the attention of other international bodies and organisations, like the Water Integrity Network (WIN), which criticised the state’s failure to protect the rights of local residents and the slow, non-transparent reaction by the authorities to the pollution of the water.

“(The state) has lacked accountability and transparency in its laboratory tests, the information given to the community, and compliance with rules and regulations,” says the 2014 WIN report “Integrity and the Human Right to Water in Central America”.

According to the Chamber of Pineapple Producers and Exporters (CANAPEP), which represents the industry in Costa Rica, pineapples were grown on 42,000 hectares of land in Costa Rica in 2012 and exports of the fruit brought in 780 million dollars. The United States imported 48 percent of the total, and the rest went to the European market.

Worried about the growth of pineapple production and the possible impact on local communities, the municipalities of Guácimo and Pococí declared a moratorium on an expansion of the industry. But a 2013 court ruling overthrew the ban, after it was challenged by CANAPEP.

In 2014, the annual state of the nation report stated that pineapple production stood out because of the large number of conflicts, and noted that it had mentioned the same problem in earlier reports.

IPS received no response to its request for comment from Corporación Del Monte corporate relations director Luis Enrique Gómez with regard to the water problem.