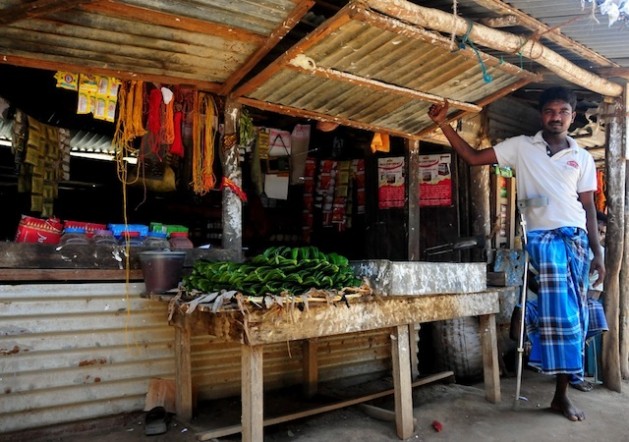 UNITED NATIONS, May 29 2015 (IPS) - In many ways, Jayakumari Balendran epitomizes the plight of the Tamil people in Sri Lanka’s northern and eastern provinces, both during and after the island nation’s 26-year-long civil conflict.

Her oldest son was shot dead in 2006 while working in the coastal town of Trincomalee, about 300 km east of the capital, Colombo, by ‘unidentified killers’.

“We are just trying to remind the government that there are people, communities, hundreds of thousands of families, waiting for justice." -- Anuradha Mittal, executive director of the Oakland Institute
Abandoning her husband, she was forced to flee to Kilinochchi, a town in the north, which, at the time, served as the administrative nerve-centre for the Liberation Tigers of Tamil Eelam (LTTE), the rebel group battling the government’s armed forces for an independent state for the country’s minority Tamil population.

Three years on, in May 2009, as the war dragged to a bloody finish, her second son was also killed – one of dozens who perished in the shelling of the Puthukkudiyiruppu hospital, an attack the army denies responsibility for.

Both boys were 19 years old at the time of their deaths.

Her third and final son, who was forcibly conscripted into the LTTE’s ranks as a child soldier, reportedly surrendered to government forces later that same month after the army overran LTTE-controlled areas and declared a decisive win over the rebels.

However, she has neither seen nor heard from him since, an ominous sign in a country where enforced disappearances are a common occurrence.

And her troubles did not end there. While protesting his disappearance, Jayakumari was arrested and imprisoned in the notorious Boosa prison, an institution that has become synonymous with torture.

Following presidential elections in January 2015 that saw the ouster of long-time president Mahinda Rajapaksa and the transfer of power to his former health minister Maithripala Sirisena, Jayakumari was released, in a move that activists took as a sign of safer and more just times to come.

But after returning to find her humble home ransacked and her possessions looted, Jayakumari was forced to place her daughter in an ashram for her own safety, while she herself move into a hut, the only place she could afford as a single mother – her husband died of cancer in 2012 – and where she now ekes out a rough living.

The converging issues that have defined her life over the past 10 years – war, disappearances, detention, displacement and abject poverty – are now the subject of an independent inquiry by a U.S. think-tank, the first of its kind to be released after the guns fell silent in 2009.

Titled ‘The Long Shadow of War’, the 37-page report by the California-based Oakland Institute (OI) details the unhealed wounds that still plague the former war zone, preventing civilians like Jayakumari from moving on with their lives.

During a press conference call Thursday, OI Executive Director Anuradha Mittal outlined some of the biggest hurdles to reconciliation, including continued heavy militarisation of the north and east, systematic erasure of Tamil history and culture, and the inability of the government to implement an effective mechanism to investigate alleged war crimes – for which both the government and the LTTE stand accused – committed during the last phase of the conflict.

Although Sirisena’s government has taken steps towards demilitarization, appointing a non-military civil servant as governor of the northern province in place of the former security forces commander who previously held the post, the presence of one soldier for every six civilians is a thorn in the side of many war-weary residents.

OI’s report quotes Defense Minister Ruwan Wijewardene as saying, as recently as February, that the government has no intention of removing or scaling down army formations in the Jaffna peninsula.

Furthermore, as Mittal pointed out Thursday, the army is not a passive presence. Rather, “it is engaged in property development, running luxury tourist resorts, whale-watching excursions, farming and other business ventures on land seized from local populations.”

Land and property have been major sticking points since 2009, with 90,000 of an estimated 480,000 people displaced during the last months of fighting still living in makeshift shelters, according to 2014 statistics published by the Internal Displacement Monitoring Centre (IDMC).

The situation has been particularly difficult for war widows, who are thought to number between 40,000 and 55,000, now tasked with providing single-handedly for their families.

For women like Jayakumari, poverty and unemployment combine with uncertainty over missing relatives to create a culture of fear, and stillborn grief.

Citing data from the United Nations as well as religious institutions on the ground in the Vanni – a vast swathe of land in the north and east – OI estimates the number of missing people to be between 70,000 and 140,000.

“So many mothers like me are wandering from place to place in search of their children,” Jayakumari said in a statement to the press this past Thursday.

“We need answers. The government should at least arrange a place where we can go and visit our children. I want my child,” she asserted.

Her demand strikes at the heart of what could well be the defining challenge for the present government: implementing a national reconciliation process centered on a credible investigation into wartime abuses.

In March last year, the U.N. Human Rights Council (HRC) agreed on a resolution that would have launched a war crimes inquiry, but the then-government barred independent researchers from entering the country.

Despite these roadblocks, the world body was set to release its findings earlier this year, but agreed to the fledgling government’s request to delay publication for six months – leading to criticisms over a perceived watering down of U.N. mandates to suit the whims of electoral politics.

“Given the past records of government inaction, international pressure is critical for any decisive action,” Mittal asserted. “Instead of pursuing their geostrategic interests, the U.S., India and other countries should demand the release of the U.N. inquiry.”

She clarified that urgent tone of the report is not an attack on the new government, but should rather serve as a reminder of the severity of the situation for ordinary Tamil people.

“We are just trying to remind the government that there are people, communities, hundreds of thousands of families, waiting for justice,” she noted.

The death toll during the war’s last stages remains a hotly contested figure, both within Sri Lanka and among the international community. U.N. data suggest that 40,000 people died, but the previous government insisted the number of dead did not exceed 8,000.

Meanwhile, a new book by the eminent research body University Teachers for Human Rights (Jaffna) says the true death toll could be closer to 100,000.

This is one of just many unanswered questions that could be put to rest by a just reconciliation process.