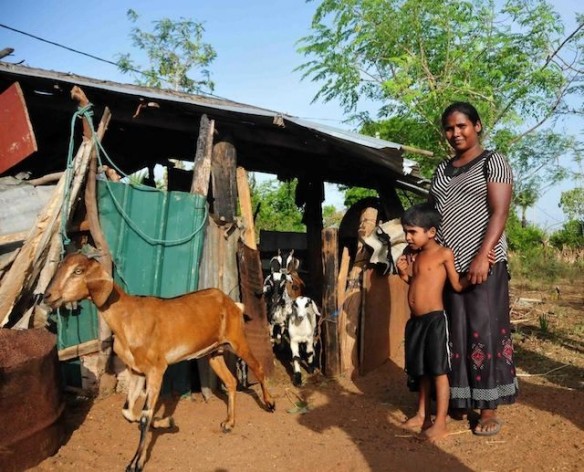 Subashini Mellampasi, a 34-year-old single mother of three, including a disabled child, raises goats to provide for her family. Credit: Amantha Perera/IPS

VALIPUNAM, Sri Lanka, Jul 7 2014 (IPS) - The village of Valipunam, 322 km north of Sri Lanka’s capital Colombo, occupies one of the remotest corners of the country’s former war zone. The dirt roads are impossible to navigate, there are no street lights, telephone connections are patchy and the nearest police post is miles away, closer to the centre of the battle-scarred Mullaitivu district.

Here, even able-bodied men fear being alone in their homes. But 35-year-old Sumathi Rajan knows that if she leaves her small shop unattended at night, there is a good chance there’ll be nothing left in it the next morning.

Determined to preserve her sole income source, she sleeps on the shop floor every night, along with her 12-year-old son, despite the very real threats of theft, and even rape.

“I know what I have to do, I know how take care of my son, and myself,” the feisty woman, a single mother, tells IPS, standing in front of her humble establishment.

Rajan’s life has been one of upheaval and turmoil in the last five years.

“I think what these [women] have gone through in the past three decades - as individuals, as families, and as an entire community - has made them resilient." -- M S M Kamil, head of the economic security department at the International Committee of the Red Cross (ICRC)
In early 2009, when Sri Lanka’s three-decade-old civil conflict showed signs of reaching a bloody finale, Rajan and her family – living deep inside the area controlled by the separatist Liberation Tigers of Tamil Eelam (LTTE) – prepared to face a drawn-out period of violent uncertainty.

By April of that year Rajan and her son, only seven years old at the time, were among tens of thousands of Tamil civilians trapped in a narrow swath of land in between the Indian Ocean and the Nandikadal Lagoon on the island’s north-east coast as the Tigers fought a final bloody battle against government forces.

The two escaped the fighting alive but with no possessions except the clothes they were wearing. For the next two-and-a-half years, ‘home’ was a massive displacement camp known as Menik Farm in the northern Vavuniya district.

When the family finally returned to Valipunam in late 2011, Rajan was faced with the seemingly impossible task of building her life from scratch.

She was no stranger to the hard decisions that accompany the life of a single mother. Even before the war forced them to flee Rajan had to toughen up, since her occupation as a moneylender meant she had to be firm with her clients about repayment and interest rates.

She continues the business today, facing many of the same challenges as she did three years ago. “When people don’t return the money on the due date, I will go to their homes to collect it,” she asserted.

Her shop received a boost earlier this year when she was chosen as the recipient of a one-off 50,000-rupee (380-dollar) grant from the International Committee of the Red Cross (ICRC).

“It helped me to expand the shop,” Rajan said, looking proudly around at the shelves that carry everything from dhal to single-use packages of shampoo. But new supplies mean fresh fears of theft and little peace for Rajan, who deposits her meagre monthly savings of some 25 dollars in her son’s account for safe keeping.

Stories like Rajan’s are not rare in Sri Lanka’s war-ravaged Northern Province, where between 40,000 and 55,000 female-headed households struggle to eke out a living, according to aid and development agencies in the region.

An assessment by the United Nations High Commissioner for Refugees (UNHCR) in June 2013 found that 40 percent of all women out of some 467,000 returnees who were displaced during the last stages of the war still felt unsafe in their own homes, while 25 percent felt similarly vulnerable venturing outside their villages by themselves.

The situation is worse for families headed by single mothers.

“From field assessments, there is a clear indication that children of the estimated 40,000 female-headed households are the most vulnerable to sexual abuse,” stated a protection update by the Durable Solutions Promotion Group, a voluntary coalition of international organisations and agencies, back in March.

Despite such odds, women who run their own households are some of the most resilient in the former conflict zone, according to humanitarian workers in the region.

“These women have a lot of fortitude,” M S M Kamil, head of the economic security department at ICRC, told IPS.

“I think what they have gone through in the past three decades – as individuals, as families, and as an entire community – has made them resilient. They feel that they can survive [and] take care of their families whatever the circumstances are,” he added.

Subashini Mellampasi, a 34-year-old single mother of three children aged between five and 14 years, is living proof of the truth behind Kamil’s statement.

Her eldest boy is disabled, and cannot hear or speak. To make matters worse, her husband left her and the three children after they returned to their village following the war’s end.

In early 2014, the ICRC gave her the funds to start up a small business. Mellampasi chose to raise goats and purchased a small herd of about 10 animals. Six months on she has a herd of 40.

The remaining animals must meanwhile be cared for, and their milk collected each morning for the family’s consumption.

“It is a hard life, but I think I can manage,” Mellampasi told IPS.

Because the sale of male goats does not provide a steady income, she has found employment as a cleaner in the nearby village school, for a daily pay of about 600 rupees (roughly 4.50 dollars).

She says she needs at least 10,000 rupees (about 80 dollars) a month in order to survive, but other families say they need at least twice that amount, especially those who use transport regularly.

Many cut corners by having neighbours look after their children while they are at work, or pawning their jewelry in order to purchase schoolbooks and uniforms for their kids.

While women like Mellampasi scratch out a barebones existence, thousands of others have fallen through the cracks altogether, according to Saroja Sivachandran, head of the Centre for Women and Development in Jaffna, capital of the Northern Province.

“There are thousands of women who are not receiving any kind of assistance,” she told IPS. “There are limited on-going programmes that target this extremely vulnerable group. What we need is a large programme encompassing the full province and all the single female-headed families,” she added.

But financial aid to the country has been dwindling steadily since the war’s end. Three successive joint appeals for aid in the region have reported a shortfall of 430 million dollars.

With the U.N. Office for the Coordination of Humanitarian Affairs (OCHA) also winding down its work in Sri Lanka, a substantial programme for single mothers remains, for now, only a promise on paper.