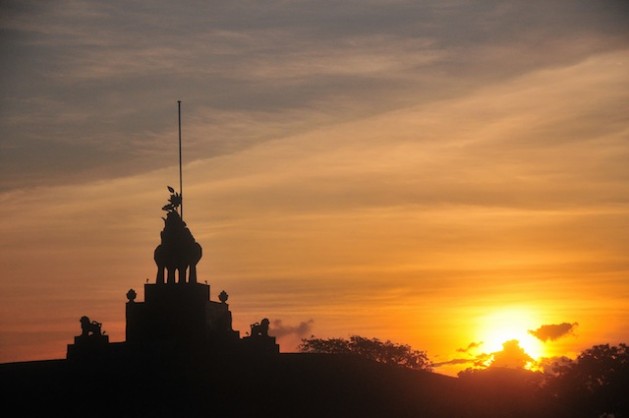 Dawn breaks over a war memorial honouring government forces at Elephant Pass, in northern Sri Lanka. Many feel that the country has a long way to go before the wounds of conflict are healed. Credit: Amantha Perera/IPS

COLOMBO, Apr 4 2015 (IPS) - Jessi Joygeswaran seems like your typical 23-year-old young woman. She has an infectious smile and laughs a lot when she talks. Like many other young women anywhere in the world, her life is full of dreams.

“I want to go to university, I want to do a good job,” she tells IPS. She seems sure that she can make her dreams come true.

“Before we can move [forward], we need to accept our shared, horrible past.” -- Jessi Joygeswaran, a resident of Sri Lanka's former war zone.
In fact, Joygeswaran’s life has been anything but ordinary. She grew up in a war zone, and now spends her days thinking as much about such issues as war crimes probes and national reconciliation as she does about her own future.

Hailing from the minority Tamil community, the young woman was born and bred in the Vanni, the vast swath of land in Sri Lanka’s Northern Province that bore the brunt of the island’s 26-year-long civil war that only ended in mid-2009.

In 2006 Joygeswaran, just 14 at the time, had to flee from her ancestral home in the village of Andankulam, in the northwestern Mannar District, when fighting erupted between government forces and the Liberation Tigers of Tamil Eealm (LTTE), a rebel group attempting to carve out a separate state in the Tamil-speaking north and eastern provinces of Sri Lanka.

“We were running from bullets and shell-fire for three years,” she recalls. It was April 2009 when she and her family finally escaped the horror. “Death was a possibility every second,” she says, the smile vanishing from her face.

Even after the war ended, the Vanni’s troubles did not. A quarter of a million people who escaped the war were restricted to relief camps that looked and felt more like detention centres, where they remained until late 2010.

Over 400,000 people who had fled the region during various stages of the conflict returned to scenes of devastation, forced to rebuild their lives from scratch while coming to terms with the death or disappearance of thousands of their kin. Homelessness, trauma and fear were the order of the day.

A new government – a new era?

All of that changed this past January when Sri Lanka voted in a new president, Maithripala Sirisena, ousting the incumbent Mahinda Rajapaksa, whose defeat of the LTTE enabled him to exercise an iron grip over the country.

On Jan. 8, for the first time in her life, Joygeswaran voted alongside her countrymen. Despite all past discrimination against her minority community, she is completely invested in the new national government.

“We voted for justice and peace for all,” she asserts. It is a humble aspiration, but one shared by a majority of people in this island nation of 20 million, where generations of bloodshed resulting in a death toll of between 80,000 and 100,000 had many doubting that the country would ever return to a state of normalcy.

The first 60 days of the new government have been a mixed bag, especially for northern Tamils. Travel restrictions and a suffocating military presence – with members of the armed forces overseeing virtually every aspect of daily life – have eased; but there is still limited progress on more delicate issues, like a comprehensive inquiry into wartime abuses.

The last days of the war could have resulted in a civilian death toll of about 40,000, according to an advisory panel set up by the United Nations Secretary-General – a figure hotly disputed by the previous government.

A new book by the respected research body, University Teachers for Human Rights (Jaffna), titled ‘Palmyra Fallen’, says the figure could be as high 100,000.

Both government forces and the LTTE have been accused of human rights violations during the last bouts of fighting.

Three resolutions put forth at the Geneva-based U.N. Human Rights Council (HRC) have sought an international investigation into the end of the war. The Rajapaksa government, determined not to allow “foreign interference” in what it called a purely domestic issue, set up its own Lessons Learnt and Reconciliation Commission (LLRC) but its recommendations have largely been left on paper.

There is an ongoing commission on disappearances, and the International Committee of the Red Cross (ICRC) has begun an island-wide survey on families of the missing.

But not one of these measures has led to a single prosecution or judicial complaint against the perpetrators.

Sirisena’s government has promised a fresh probe, with international inputs. The new foreign minister, Mangala Samaraweera, has been traveling the globe since assuming office, trying to convince the international community to allow Sri Lanka some breathing room in which to push through an indigenous, credible reconciliation process.

So far his charms seem to be working. The United States, United Kingdom and other western nations agreed to postpone the release of a U.N. Human Rights Council investigation report into wartime human rights abuses. It was due in March and now will be unveiled in September.

The government announced on Mar. 18 that it was considering lifting proscriptions issued on Tamil diaspora groups, in a move that many feel is aimed at garnering the support of moderate Tamils around the world. While no official figures exist, Sri Lanka’s Tamil diaspora is believed to number close to 700,000.

“The government of President Sirisena is seriously committed to expediting the reconciliation process. In doing so, the Sri Lankan diaspora whether it be Sinhala, Tamil or Muslim, has am extremely important role to play,” Samaraweera told Parliament on Mar. 18.

Despite this nod to the diaspora, government officials have made clear that the mechanism for investigating possible war crimes committed by both sides must be a robust, national initiative, without foreign interference.

“Any charges […] against our security forces have to be investigated, [but] it has to be handled by the local mechanism, that is what we have always stated,” Power and Energy Minister Patali Champika Ranawaka told the Foreign Correspondents Association in February.

But it will take some muscle to convince the international community that Sri Lanka is capable of initiating a successful probe with the power to go from theory to practice.

“This is why Amnesty International (AI) and other organisations have urged the Sri Lankan authorities to cooperate with the U.N. and take advantage of international expertise in the development of a credible, effective and truly independent mechanism – one that will not be vulnerable to the kinds of threats and political pressures that have obstructed previous efforts,” David Griffiths, AI’s deputy Asia Pacific director tells IPS.

AI and several other international organisations also favour the setting up of a special tribunal to try any human rights violators.

Among other unresolved issues are allegations that the armed forces conducted summary executions of surrendered LTTE cadres, as well as possible incidents of sexual abuse of persons in captivity. The LTTE has been accused of using civilians as human shields, as well as for conscripting children into its ranks, among other things.

“It is important for everyone concerned and for Sri Lanka’s future that all allegations of crimes under international law are fully investigated and, where sufficient admissible evidence exists, those suspected of the crimes are prosecuted in genuine proceedings before independent and impartial courts that comply with international standards for fair trial.  Victims must be provided with full and effective reparation to address the harm they have suffered,” Griffiths says.

Already some positive changes have occurred under the new government. Ruki Fernando, a researcher with the Colombo-based rights group INFORM, tells IPS that the appointment of a civilian governor to Jaffna, replacing a former military officer, as well as the government’s releasing of lands acquired by the military, bode well for the future.

“I am cautiously optimistic, but it is a long road ahead,” he says.

In Joygeswaran’s words: “Before we can move [forward], we need to accept our shared, horrible past.”