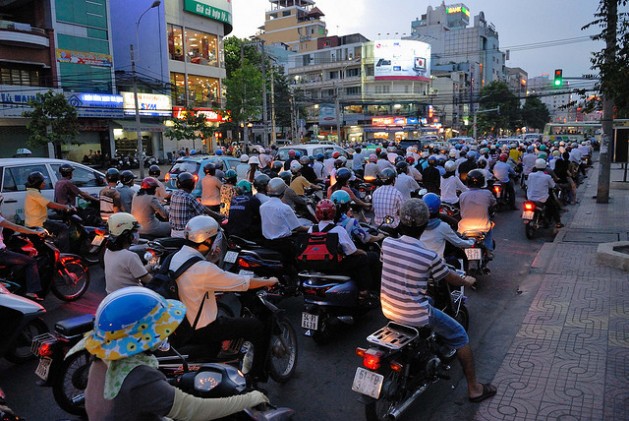 If current urbanisation trends continue, an additional 500 million people could be living in cities in the Asia-Pacific region by 2020. Credit: Padmanaba01/CC-BY-2.0

UNITED NATIONS, May 14 2015 (IPS) - Home to an estimated 3.74 billion people, the Asia-Pacific region holds over half the global population, determining to a great extent the level of economic stability, or chaos, in the world.

Average real incomes per capita in developing economies of the Asia-Pacific region have doubled since the early 1990s, with China witnessing a seven-fold increase in income per capita since 1990. -- United Nations Economic and Social Commission for Asia and the Pacific (ESCAP)
Growth has remained steady – with developing nations in the region showing a slight increase to 5.9 percent growth, up from 5.8 percent last year.

The survey also states that average real incomes per capita in developing economies of the region have doubled since the early 1990s, with China witnessing a seven-fold increase in income per capita since 1990, and Bhutan, Cambodia and Vietnam seeing their own real incomes triple in the same time period.

Although China’s growth is expected to fall to seven percent in 2015, India’s growth of 8.1 percent – an increase from 7.4 percent last year – could offset any impacts of its neighbor’s “planned moderation”, while Indonesia, the world’s fourth most populous nation is projected to see growth rise from five to 5.6 percent this year.

But the spoils of growth have not been evenly shared.

According to the report, “income inequality has increased […] especially in the major developing countries, particularly in urban areas.” Overall, since the 1990s, the Gini index – a measure of income inequality on a scale of 0-100 – has risen from 33.5 to 37.5 percent for the region as a whole.

And while experts praised the region for halving the number of people living on 1.25 dollars a day, ahead of the 2015 deadline laid out at the launch of the Millennium Development Goals (MDGs) in 2000, a closer look at poverty in the region suggests that there is less to celebrate and far more to tackle.

Poverty: How much has changed since 1990?

Estimates prepared by ESCAP in the 2014 Statistical Yearbook for Asia and the Pacific reveal that the number of people in the region living on less than 1.25 dollars a day fell from 52 percent in 1990 to 18 percent in 2011 – a reduction from 1.7 billion to 772 million people.

While this is a tremendous improvement, it does not change the fact that too many millions are still eking out an existent on practically nothing, while a further 40 percent of the region’s population, some 933 million people – although not classified as the “poorest of the poor” – are in similarly dire straits, earning less than two dollars a day.

The 2014 annual statistical publication of the Asian Development Bank (ADB) takes an even deeper look at poverty statistics in the region, suggesting that the gains made in the past two decades may not be as bright as they seem.

According to the Bank’s sub-regional overview of declining extreme poverty, East Asia drove the drop in numbers with a 48.6-percent decline, followed by a 39-percent drop in Central and West Asia, 31 percent in Southeast Asia and 19 percent in South Asia.

However, the Bank highlighted three reasons for why the conventional 1.25-dollar poverty line is an inadequate measure of the costs required to maintain a minimum living standard by the poor: “Updated consumption data specific to Asia’s poor; the impact of volatile and rising costs associated with food insecurity; and the region’s increasing vulnerability to natural disasters, climate change, economic crises, and other shocks.”

By increasing the base poverty line to 1.51 dollars per person per day, as well as factoring in the impacts of food insecurity and vulnerability to natural disasters and other shocks, Asia’s extreme poverty rate shoots up to 49.5 percent of the population, or roughly 1.7 billion people.

In addition to poverty, the ESCAP survey broke down major challenges facing each particular sub-region, including “excessive dependence on natural resources and worker remittances for economic growth in North and Central Asia […]; employment and climate-related challenges in Pacific island developing countries […]; macroeconomic imbalances and severe power shortages in South and South-West Asia […]; and weaknesses in infrastructure and skilled labour shortages in South-East Asia.”

Since the financial crisis of 1997, for instance, infrastructure investment in Indonesia, Malaysia, the Philippines, Thailand and Vietnam fell from 38 billion during the year of the crash to 25 billion in 2010.

Infrastructure is desperately needed to improve basic services for the poor, including better transport networks and energy grids.

According to some estimates the sub-regions of South and South-West Asia need an estimated 400 billion dollars annually for power generation. Only 71 percent of South Asians have access to electricity, compared to 92 percent of those living in East and North-East Asia.

Further demands for infrastructure are driven by the rapid rate of urbanisation, with ESCAP suggesting that the region will need upwards of 11 trillion dollars over the next 15 years to deal with the stresses of urbanisation and prepare for huge population shifts.

The year 2012 saw 46 percent of the Asia-Pacific population dwelling in urban areas, but current growth rates indicate that by 2020, that number could rise to 50 percent, meaning an additional 500 million people will reside in the region’s cities by the end of the decade.

The title of this year’s survey, ‘Making Growth More Inclusive for Sustainable Development’, begs a review of the region’s level of inclusivity, particularly of women and young people in the labour force and political ranks.

Sadly the results are disappointing: in the Asia-Pacific region as a whole, women constitute just 18 percent of national parliamentarians, while one-third of countries in the ESCAP region have less than 10 percent female representation in parliament.

She also said the survey underscores the need for countries to adopt policies that will foster inclusive growth, both to ensure outstanding MDG commitments are met and pave the way for an ambitious post-2015 sustainable development agenda.