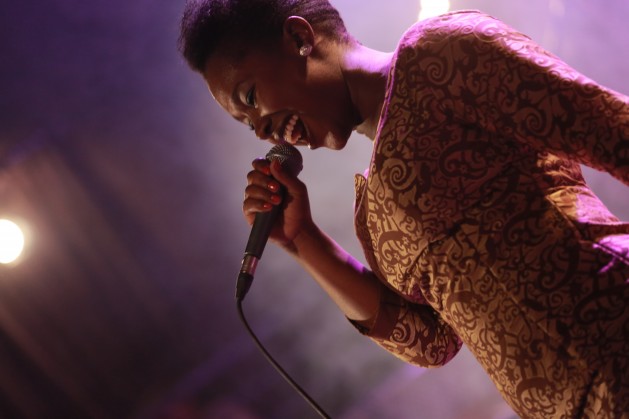 PRAIA/PARIS, Jun 11 2015 (IPS) - Elida Almeida is Cape Verde’s newest star, with thousands of fans in Africa and Europe. She sings, dances, plays the guitar, tells jokes, and makes her audiences laugh as well as groove. But behind it all, her music carries a serious message, about the importance of overcoming setbacks, avoiding unplanned pregnancy and following one’s dreams.

Now 22 years old, Almeida was discovered by the same record producer who launched Cesária Évora, and people who see her in performance or listen to her outstanding debut album – Ora doci Ora margos (Sweet Times Bitter Times) – will be struck by her maturity.

Her talent is undeniable, and the audience at a recent concert in Paris, France, evidently recognised her value, judging by the waves of affection directed her way.  They sang along, danced along and recited along to the music Almeida performed. 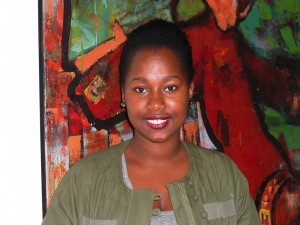 Elida Almeida, Cape Verde’s newest star, with thousands of fans in Africa and Europe, whose songs tell of her rough childhood on the Cape Verdean island of Santiago. Credit: A.D. McKenzie/IPS

But it wasn’t all upbeat. Almeida’s songs tell of her rough childhood on the Cape Verdean island of Santiago, where her father died at an early age. She had to move afterwards to the unfamiliar island of Maio, where she helped to take care of her siblings while her mother worked as a street vendor.

She also learned to sing at church and spent time after school listening to the radio because there wasn’t much else to do for entertainment, she told IPS in an interview.

“There was no electricity, so the [battery-operated] radio was really all we had to amuse ourselves, and I listened to music from Cape Verde, from the United States, from other countries,” she says.

As a student, Almeida had dreams of entering the legal profession, but she became pregnant and gave birth to a son when she was 16, and so had to rethink her future after returning to Santiago.

She managed to finish high school and attend college, while caring for her son and coming to the realisation that music was her true passion, not law. She wrote her first song at age 17, putting her experiences into the lyrics, and the others that followed are also autobiographical, she said.

“My mother was so disappointed when I became pregnant that she said it was the end of her life,” Almeida recalls. “But afterwards she was really supportive. She is the reason that I’m able to tour and perform now, and the family of my son’s Dad are also helpful.”

“Each song has a message, even when it’s more festive. I’m telling girls to be careful, and also to fight for their own success” – Elida Almeida

Her eyes light up when she speaks of her five-year-old son, but Almeida acknowledges that teenage pregnancy is a problem in her country as in many others. She told IPS that enough information is not given to young people about their bodies and sexuality, and she hopes that more schools will implement sexuality education as part of the curriculum.

“I didn’t know much,” she says. “Nowadays girls who are even younger than I was are having children, at age 14, 15, and they need assistance.”

According to the United Nations Population Fund (UNFPA), about 20 percent of the children born in Cape Verde in 2013 were to women under 18 years old, down from nearly 24 percent in 2011 but still high. The agency says that mortality rates are higher for a pregnant teen than for women aged between 25 and 29, and that the unborn baby is at an increased risk as well.

Many teenage mothers will face a life of poverty and hardship, especially if they have no way out, such as continued education or a career. Almeida’s big break came when she was “discovered” by José Da Silva, the CEO of record company Lusafrica, while performing in Cape Verde.

Da Silva is the former musician who established Lusafrica in the late 1980s to record Évora – the “barefoot diva” who became an international star – and he has also boosted the careers of many other African artists. 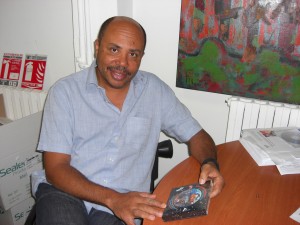 José Da Silva, CEO of record company Lusafrica, who brought Elida Almeida to Paris to record, insisting that she sing her own songs. Credit: A.D. McKenzie/IPS

He brought Almeida to Paris to record, insisting that she sing her own songs, he told IPS. The album, released in Cape Verde at the end of last year and in Europe this year, has found immediate success, with listeners apparently able to relate to the young singer’s experiences.

The audience in Paris, consisting mostly of the expatriate Cape Verdean community, knew all the words to Lebam Ku Bo and Nta Konsigui, the first two songs which have received great airplay and been released on video as well to thousands of views.

“Each song has a message, even when it’s more festive,” Almeida says. “I’m telling girls to be careful, and also to fight for their own success.”

The album comprises intricate arrangements as well as the melodies and beats of Santiago, where batuque, funaná and morna are among the genres. Almeida brings her own personality to the music, and even the more traditional arrangements sound fresh and modern, with her stirring voice doing the songs justice.

On stage, her performance pulses with energy and youthful sassiness. At one point in the Paris concert, a spectator seemed to issue a challenge about dancing, and Almeida promptly invited the woman on stage to show what she could do. Tying scarves around their hips, singer and spectator engaged in an amiable dance-off, more moving together than trying to outdo each other.

“It’s easy,” Almeida teased the audience afterwards. “You just do it like this.” Smiling, she shook her hips to the left and the right, and got everyone laughing.

Enjoying the ambiance, the five-member band played what had to be their best, with the drummer and percussionist filling the cosy Studio de l’Ermitage in the “hills” of Eastern Paris, with their infectious rhythms. Guitarist Hernani Almeida recreated his arrangements from the album, while female bassist Nelida Da Cruz – “the only woman bassist from Cape Verde”, as Almeida introduced her – also had people swaying.

Asked about the inevitable comparisons with the late Évora, Almeida says that her music is very different, but she was also quick to pay homage to Évora.

“Cesaria [Évora] is a pride and joy for us, for all of Cape Verde,” she says. “I come from a different island, with a different culture and different singers, but I recognise her value and everything she has done for us.”

Another young singer in the future might one day say the same of Almeida, especially if the latter is able to build on her current success.