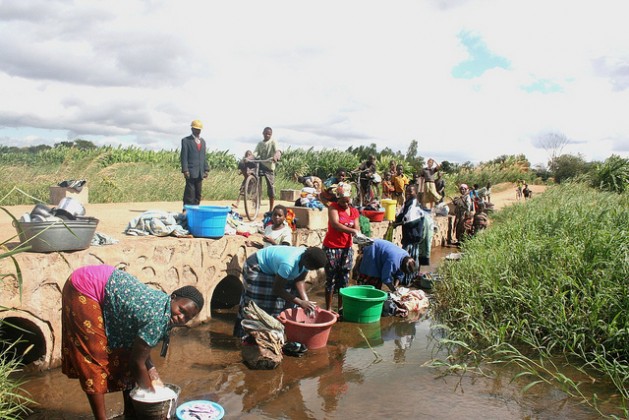 UNITED NATIONS, Jul 6 2015 (IPS) - The United Nations, which launched one of its most ambitious anti-poverty development programmes back in 2000, has hailed it as a riveting success story – despite shortcomings.

Launching the final report of the Millennium Development Goals (MDGs) at a meeting in the Norwegian capital of Oslo on Monday, Secretary-General Ban Ki-moon said “following profound and consistent gains, we now know that extreme poverty can be eradicated within one more generation.”

“If people go to bed hungry, don’t have access to water and sanitation, to education or health coverage, the income threshold is not the end of poverty." -- Ben Phillips of ActionAid

The MDGs, which are targeted to end this December, “have greatly contributed to this progress, and have taught us how governments, business, and civil society can work together to achieve transformational breakthroughs,” he said.

The United Nations claims it has cut poverty by half. “The world met that goal – and we should be very proud of that achievement,” he added.

But the target for the complete eradication of poverty from the developing world has been set for 2030 under a proposed post-2015 development agenda, including a new set of Sustainable Development Goals (SDGs), to be launched at a summit meeting of world leaders in September.

Goal-setting can lift millions of people out of poverty, empower women and girls, improve health and well-being, and provide vast new opportunities for better lives, according to the Millennium Development Goals Report 2015 released Monday.

“Only two short decades ago, nearly half of the developing world lived in extreme poverty. The number of people now living in extreme poverty has declined by more than half, falling from 1.9 billion in 1990 to 836 million in 2015,” the study said.

But civil society organisations (CSOs) were sceptical about the claims.

They reduced the development discourse to a small number of quantitative goals and targets and did not touch the structural framework conditions of development, he said.

Pointing out some of the shortcomings, he said the goal on income poverty has been weak and the threshold of 1.25 dollars per day completely inadequate. Someone with a per capita income of 1.26 dollars is still poor.

“And focusing only on income poverty is not at all sufficient. Governments have to deal with the problems of poverty and inequality in all their dimensions.”

Therefore, it is good news that the new SDGs reflect a much broader development approach, are universal and multidimensional, and contain not only goals for the poor but also goals for the rich, he noted.

Ben Phillips, International Campaigns and Policy Director at ActionAid, told IPS world leaders cannot fulfil their pledge to end poverty unless they tackle the crisis of the widening gap in wealth and power between the richest and the rest.

Ending poverty by 2030 cannot and should not be only an arithmetic exercise on the basis of very low dollar poverty lines which will not guarantee a life of dignity for all, he said.

“If people go to bed hungry, don’t have access to water and sanitation, to education or health coverage, the income threshold is not the end of poverty,” Phillips said.

Even to get beyond the very low poverty lines they have, however, growth will not be enough if it is not more evenly shared, he said.

Governments need to stand up to corporate interests who are now so powerful that they are not only the sole beneficiaries of global rigged rules but the co-authors of them, he argued.

“It’s clear that governments will only take on the power of money if they are challenged by the power of the people.”

Still, the good news is that the movement to tackle inequality and confront plutocracy is growing, declared Phillips.

Martens told IPS lessons from the MDGs show that development goals are only useful if they are linked to clear commitments by governments to provide the necessary means of implementation.

That’s why the Addis Ababa Conference on Financing for Development (FfD), scheduled to take place in Ethiopia next week, is of utmost importance.

To avoid the complete failure of this conference, he said, all governments have to accept that they have common but differentiated responsibilities to provide the necessary means to implement the SDGs; and they have to strengthen the U.N. substantially in international tax cooperation by establishing an intergovernmental tax body within the U.N.

Meanwhile the Millennium Development Goals Report 2015 found that the 15-year effort to achieve the eight aspirational goals set out in the Millennium Declaration in 2000 was largely successful across the globe, while acknowledging shortfalls that remain.

The data and analysis presented in the report show that, with targeted interventions, sound strategies, adequate resources and political will, even the poorest can make progress.

Highlighting some of the shortcomings, the report said that although significant gains have been made for many of the MDG targets worldwide, progress has been uneven across regions and countries, leaving significant gaps.

Gender inequality persists in spite of more representation of women in parliament and more girls going to school.

Women continue to face discrimination in access to work, economic assets and participation in private and public decision-making, according to the report.

Despite enormous progress driven by the MDGs, about 800 million people still live in extreme poverty and suffer from hunger.