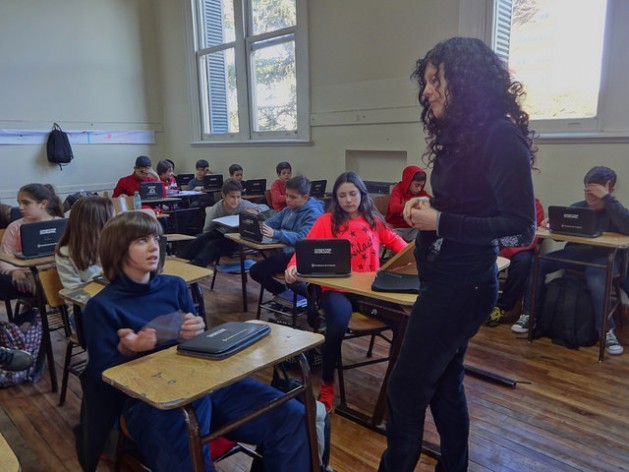 Graciela Fernández Troiano teaching a visual skills class at the Colegio Nacional Rafael Hernández , the public high school where she works in the city of La Plata, in Argentina. The learning process has been transformed in the country’s public schools thanks to the distribution of laptops to all students, under the government’s Conectar Igualdad programme. Credit: Fabiana Frayssinet/IPS

LA PLATA, Argentina, Jul 27 2015 (IPS) - The showcases in the Colegio Nacional Rafael Hernández, a public high school in La Plata, Argentina, tell the story of the stern neoclassical building which dates back to 1884. But the classrooms reflect the digital era, thanks to the computers distributed to all public school students as part of a government social inclusion programme.

The atmosphere is happy and noisy during the first year visual skills class, where the students are focused on making a short film using their computers. The film opens with the school’s majestic central staircase and goes on to discuss the often traumatic transition from primary to secondary school.

“Kids from many different primary schools come together here,” the teacher of the class, Graciela Fernández Troiano, told IPS. “I put the emphasis on providing them with support using the images and metaphors that art offers, in the transformation they’re going through.”

“When we came to this school, we didn’t know anyone,” said one of the students, Giancarlo Gravang. “With this project we started to get to know each other, to make friends, because we worked in groups.”

“What (Conectar Igualdad) tries to do is narrow the digital gap between those who have access to technology and those who don’t, to meet a first objective, social justice, and a second – equally or more important – objective: to improve the quality of education.” -- Silvina Gvirtz

The 12- and 13-year-olds in this class took photos of feet and staircases using their laptops or cell phones and digitalised and animated them, thanks to the programme Conectar Igualdad (Connect Equality), run by the National Social Security Administration.

Since 2010, 5.1 million laptops – referred to here as notebooks – have been distributed, reaching all of the students and teachers in the country’s secondary and special education schools and government teacher training institutes.

The computers, with Internet connection, are used in all of the courses, both in school and at home.

“You can do your homework better, and do searches for more things,” said Lourdes Alano, a student.

In the “transformational staircases” project, Fernández Troiano introduces the students, for example, to works of art such as Dutch artist M.C. Escher’s House of Stairs, or Argentine writer Julio Cortázar’s short story Instructions On How to Climb a Staircase.

“Leaving the classroom and using the computer in a different part of the school wasn’t a source of distraction for them, like I thought it would be, but actually helped them concentrate on their work,” Fernández Troiano said. “It broke the routine of sitting at their desks. The inclusion of technology and space made them work harder.”

The programme’s administrators see creative initiatives like Fernández Troiano’s combination of diverse disciplines as a reflection of how universal access to a computer is a powerful educational tool, as IPS found the day we spent at the school in this city 52 km from Buenos Aires.

Silvina Gvirtz, executive director of Conectar Igualdad, explained to IPS that the programme emerged from a decision by President Cristina Fernández, as part of an integral educational policy that in 2006 made secondary education compulsory until the age of 18.

“It emerged as an educational tool that makes it possible to improve the quality of teaching, and as a result, of learning,” she said. 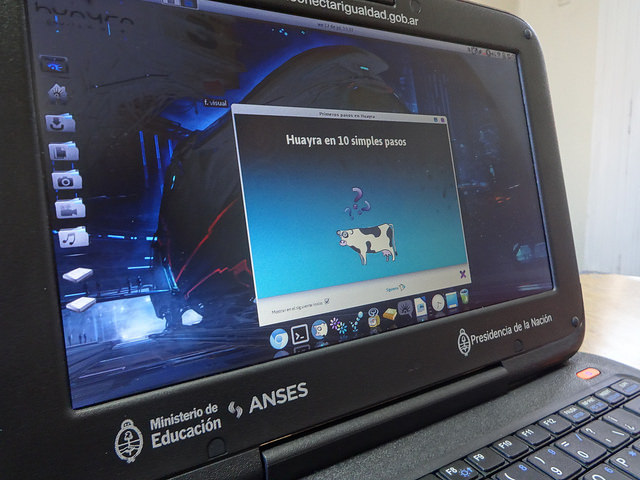 One of the laptops distributed to all public secondary school students in Argentina. A flying cow is the symbol of the open source Linux-based Huayra operating system, which was created locally for the government programme Conectar Igualdad. Credit: Fabiana Frayssinet/IPS

But the programme goes beyond distributing laptops.

“What it tries to do is narrow the digital gap between those who have access to technology and those who don’t, to meet a first objective, social justice, and a second – equally or more important – objective: to improve the quality of education,” said Gvirtz.

“Every adolescent has a computer, no matter where they live or where they come from,” Daniel Feldman, a professor of educational sciences at the University of Buenos Aires, told IPS. “This also creates changes in the family – in some cases it’s the only computer in the home, giving the entire family access to information and the Internet.

“That in itself has a compensating effect,” he said.

That inequality is familiar to Ezequiel Zanabria, who says he is happy now because he has his own computer “with all my things on it,” or Esteban López, who proudly shows his mother how to use the notebook.

According to Feldman, other effects of the programme are the recognition of “a right to and a sentiment of restoration of dignity” which at the same time “generates other mechanisms of integration and social participation.

“It’s wonderful to see the kids in front of the school, sitting in long lines along the sidewalks with their notebooks. It doesn’t matter if they’re studying, playing, chatting – they now have access to all of that, which is a big first change,” he stressed.

To illustrate the different ways the laptops can be used, Gvirtz said: “Instead of the traditional drawings on the blackboard, by using a programme we developed, students see how atoms join together to form molecules…In a dance school, some girls used their notebooks to film themselves while they danced, to analyse the mistakes they made.”

“The computer doesn’t replace the direct experience of a museum, but it indirectly allows access to historical and scientific sources, images, films, not only purely educational but with educational content…all they need is access to the normal channels, in order to have a huge quantity of information at their fingertips,” Feldman said.

Conectar Igualdad has also given a major boost to the national computer industry. Ten computer factories have opened, and in each public tender, more domestically produced parts have been required, as well as more and more advanced technologies, such as greater memory and better video definition, Gvirtz said.

Along with Windows, the notebooks use Huayra, a Linux-based open source operating system developed locally for the programme, which unlike proprietary systems can be modified and improved, she noted.

“When they started saying that every student would have a notebook, nobody believed it – people said that would be the day when cows fly (an expression roughly equivalent to ‘when hell freezes over’),” said a student, María Elena Davel.

But the cow, which today is the Huayra symbol, is now flying and plans to go even higher. The next step is to add a computer programming course in schools.

“This is key because we want to move towards technological sovereignty,” said Gvirtz. “We want to form both producers and intelligent consumers of technology.”

The laptops are distributed to the students under a loan-for-use agreement with the parents. The youngsters can then keep them if they graduate.

One challenge is training the teachers, who must adapt to the new e-learning and digital culture in this country of 42 million people, where there are nearly 12 million students in the educational system.

“It’s like the transition from a blackboard with chalk in the hands of each student, to the school notebook and pen. That was also a change in technology in the classroom, which had to be adapted to,” Feldman pointed out.

“This is here to stay,” he said. “We’re all going to have to adapt and accept that this will bring changes in the way we teach.”