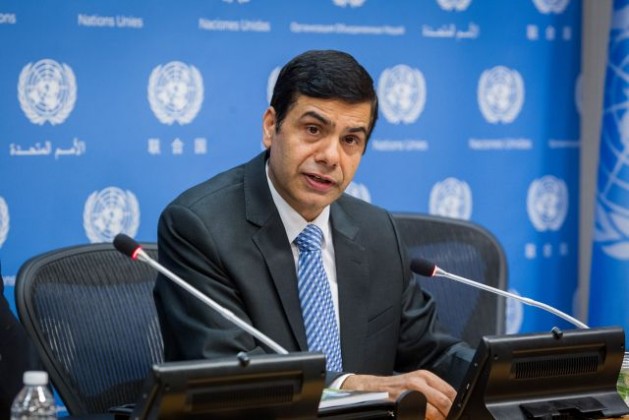 UNITED NATIONS/ADDIS ABABA, Jul 10 2015 (IPS) - Three years ago the United Nations initiated a conversation on a successor to the Millennium Development Goals (MDGs) and how the global community can lay foundations for an ambitious endeavour to eradicate extreme poverty, protect the planet, reduce vulnerability to shocks and ultimately raise the dignity of all humanity.

This conversation is set to result in the adoption of wide ranging targets by heads of state and government when they meet next September at the U.N. General Assembly.

This is indeed a noble endeavour, as the new agenda will not only continue with the unfinished business of MDGs, but sets the tone for an integrated and comprehensive approach, whose time has come.

Despite the aspirations of the Post-2015 Development Agenda, it must be recognised that the goals and targets will be fully and effectively realised only if we make them inclusive of all.

Adopting the right vision is key, but implementation is what makes all the difference. In Least Developed Countries, Landlocked Developing Countries and Small Island Developing States, the capacity and resources to deal effectively with the intertwined challenges of poverty eradication, inclusive and rapid economic growth and environmental sustainability and structural vulnerability are limited.

They need to show a strong and coherent leadership, and it is equally important that the global community steps up to the plate.

The Third International Conference on Financing for Development (FfD) to be held in a few days in Addis Ababa, Ethiopia, represents a real opportunity to address these challenges.

Holding the FfD Conference before reaching agreement on a development agenda for the next 15 years raises the stakes higher. An ambitious and forward looking FfD outcome will set the tone for the adoption of a holistic, transformative and integrated global development framework, with sustainable development at its centre.

Furthermore, owing to this chronology but also because of the centrality of the means of implementation, commitments contained in the outcome document of the FfD Conference will largely determine the degree to which the world, in particular, the most vulnerable countries, will fulfil the aspirations to end extreme poverty, achieve sustainable economic and social development, protect the planet and build resilience to shocks. The fundamental principle of equity demands that their issues remain at the core of our discourse.

A business-as-usual approach will clearly not be enough. Undertaking the investments needed to steer the most vulnerable countries towards sustainable development will require that traditional sources of finance be scaled up and targeted more clearly.

And access to new forms of development finance should be expanded to provide them with a wider pool of resources. LDCs, LLDCs and SIDS must therefore be extended an additional, preferential, concessional and most favourable support in areas such as market access, finance, technologies, know-how and other resources.

Efficient and effective use of these resources will be equally critical. Currently most of the aid distributed in the world does not go to the poorest countries. As the global community meets in Addis, least developed countries are calling for commitments that would channel the equivalent of at least 50 percent of net overseas development assistance to LDCs by 2030.

The world has not only a moral responsibility to ensure that the most vulnerable are sufficiently supported, but also to track where aid spending is going in a transparent and accountable manner.

LDCS will commit themselves to exhibit stronger national leadership and ownership for inclusive and transformative sustainable development. Their institutions and strategies need to be supported for effective delivery of services.

An increase in resources going into productive sectors and infrastructure will be a game changer for them in the medium term. It also creates a stronger base for domestic resource mobilisation. LDCs are asking that commitments already made by development partners are delivered, along with effective market access for their goods and services and an enhanced share of aid for trade.

Integrating sustainability in their development strategies will help build better resilience. Setting up crisis mitigation and a resilience-building fund for LDCs are key to putting vulnerable countries on a positive course for sustainable development through the next fifteen years. This is urgent as climate change, environmental degradation and external shocks are affecting them disproportionately.

Mutual accountability should clearly inform the next development agenda.

These actions will also ensure universal recognition and a stronger voice and participation for LDCs in global decision-making and norm-setting processes.

They will also restore hope to almost 1 billion people living in the Least Developed Countries and send a message that emancipation from a life of deprivation and moving towards a resilient and dignified future is a true possibility.

It will bring economic and social progress to the far corners of the world that have not yet reaped the equitable benefits of globalisation in a truly transformative manner. These countries have the potential to make powerful contributions to a stable and peaceful global order based on shared prosperity.

Of course, these actions have some costs. But these costs should be considered as investments for a better and stable future, and are largely within the existing means of humanity. Global resolve and clear pathways are required. To everything, there is a season, and a time to every purpose.

This is a time for actions, and we have a purpose worthy of our collective commitment. We have a lot at stake. We must not miss this opportunity staring at us in Addis.