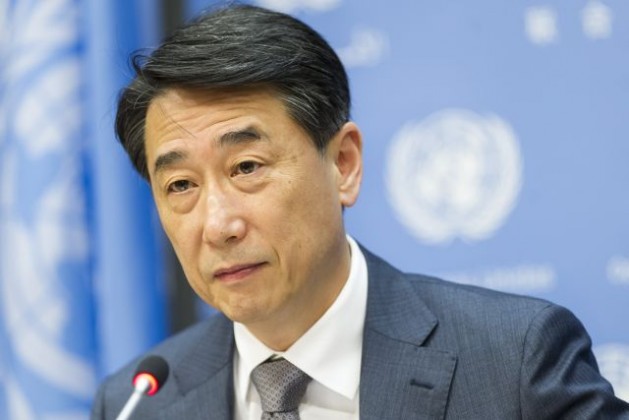 UNITED NATIONS, Aug 3 2015 (IPS) - Last week, South Korea’s Permanent Representative Oh Joon was inaugurated as the new president of the U.N. Economic and Social Council (ECOSOC). As such, he will have a key role in setting the course for implementing the ambitious Post-2015 Sustainable Development Goals (SDGs) that will be adopted at the summit of world leaders in September.

In his inaugural address, Oh laid out his agenda, saying, “The Council will lead the efforts to build an inclusive and engaging global partnership – one that welcomes the significant contribution that all stakeholders can provide.”

"We have to mobilise with the motivation that this poverty should and could be stopped within our generation if we work hard collectively and strategically.” -- Hahn Choong-hee

He has made the problem of inequality among and within nations his priority and announced that he is convening a special meeting of ECOSOC on this subject early next year.

In an interview with IPS, Oh’s Deputy Permanent Representative Hahn Choong-hee said, “Inequality has in the past been a separate discussion, however, it is now being discussed much more in the context of development.”

Explaining its importance of dealing with both development and inequality in a troubled world, Hahn said, “We cannot achieve a really peaceful and inclusive society without addressing violent extremism. At the same time, without achieving economic growth there are always isolated and marginalised groups which are more prone to violence, which makes it really difficult to counter violent extremism.”

Hahn, a career diplomat who has held senior positions in South Korea’s Foreign Affairs Ministry and served in Africa, Europe and America, stressed the importance of global partnership in pursuing the SDGs.

This requires three steps which must be accomplished.

The first is communicating the SDGs, so everybody understands what they stand for and hope to accomplish. However, there should also be conceptual understanding of the underlying issues such as social justice, inequality, and the economic, social, and environmental aspects.

Second, he said, all stakeholders, including civil society, NGOs, youth, media and academia, should participate in the process.

Third, everybody has something to contribute to the SDGs. “Whether it is financing from the private sector or technology and knowledge from academia and universities, everybody can contribute,” Hahn said.

Hahn touched on a range of issues of importance for the post-2015 agenda.

“Throughout the next 12 months we have many different processes to invite global partnerships, in which youth particularly will be extremely engaged. Society is very vocal about youth being a major player in the outcomes of development, especially in the next 15 years, but this is not just an issue to be talked about, but an issue to be acted on,” said Hahn.

He said motivating people for development was key, especially in rural areas. “This is an important engine. We have resources and technology, however, we cannot overcome this poverty without people understanding that we have to work together diligently. We have to mobilise with the motivation that this poverty should and could be stopped within our generation if we work hard collectively and strategically.”

Hahn also stressed the importance of democracy for development, citing the experience of his own country.

“Democracy means developing democratic institutions and rule of law to ensure that money which individuals earn through hard work will be protected… In (the Republic of) Korea’s development narrative, economic growth was advancing while the democratic process was lagging behind. However, when people have a good revenue and increased salary, they begin to want better protection systems for this income. What democracy means is protection and transparency.”

On how to deal with extremism, he said that education, media, migration and youth are four key areas in tackling the problem.

“Although we are talking about ‘Nobody Left Behind’ in the post-2015 agenda, in reality we need to leave behind the groups perpetuating violent extremism, in order to indicate that their argument is not acceptable to the international society,” Hahn said. “We have to isolate these groups.”

He added: “We have to teach young students about global citizenship. Critical thinking is very important when it comes to handling issues of violent extremism, to teach the youth that violent extremism is not workable with a peaceful and inclusive society.”