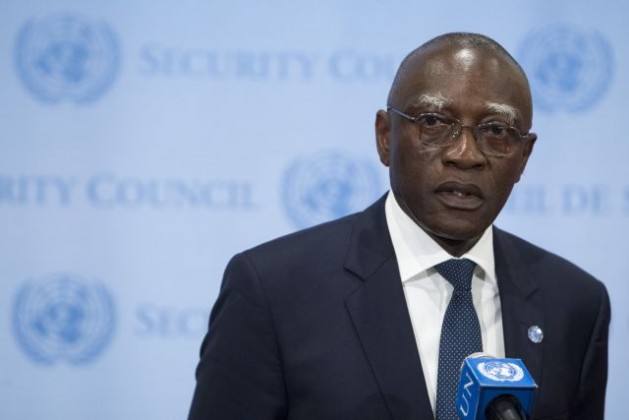 Babacar Gaye resigned his post as Special Representative of the Secretary-General and Head of the UN Multidimensional Integrated Stabilization Mission in the Central African Republic (MINUSCA) this week. Credit: UN Photo/Loey Felipe

If he did, he was only echoing the now-famous words of a U.S. presidential candidate, Donald Trump, who is best known for frequently dismissing his staffers, using that catch phrase, in a long-running reality TV show.

Following the alleged outrageous rape of a 12-year girl by peacekeeping troops in the Central African Republic (CAR) — adding to 11 other cases of sexual abuse in the battle-scarred country — the secretary-general unceremoniously forced the resignation of his highest-ranking official, Babacar Gaye of Senegal.

The dismissal has been described as “unprecedented” in the 70-year history of the United Nations.

As U.N. spokesperson Stephane Dujarric told reporters: “It is not something that I have seen in terms of Special Representatives in the field in the 15 years that I’ve been here, an action taken like this by a Secretary‑General.”

Samir Sanbar, a former U.N. assistant secretary-general and head of the Department of Public Information, told IPS firing of a Special Envoy is exceptional.

In this particular case, the Secretary General made his point in an unprecedented manner.

In previous cases, he said, a Secretary General would send a discreet message about the need to resign “for personal reasons” or transferred elsewhere until a contract expired.

For a long period, and in order to build a dedicated international civil service that would withstand taking instructions from those other than the Secretary General, a “career contract” was offered, normally after five to 10 years of proven competence.

Appointment and Promotion bodies jointly selected by the Administration and staff would review and ensure a valid transparent competitive process.

“I had served for years as Chairman after Kofi Annan left to take over Peacekeeping,” he said.

Regrettably, these bodies were abolished after Annan became Secretary General --apparently to give senior manager more leeway in selecting their own staff.

That substantive shift eroded the spirit of International Civil Servants who habitually were drawn from the widest cultural and geographic backgrounds, demoralising the existing staff and leading to weakening the main base of the Secretary General's authority.

But in a bygone era, U.N. jobs, like most dictatorial Third World presidencies, were for life – until you hit the retirement age of 60 (or 62 now, and 65 in the future).

The most that would happen for any infractions is a U.N. staffer taking early retirement – either gracefully or disgracefully.

The rule is best exemplified in a long running anecdote here of a secretary, enraged at her boss, who picked up her typewriter and threw it at him, many moons ago. But because she held a life-time job, so the story goes, she couldn’t be fired from her job.

However, the end result was a memo from the human resources department to all divisional heads at the U.N. urging them to nail all typewriters to their desks.

The story may be apocryphal but it reflected the long standing professional lifestyle at the 39-storeyed glass house by the East River.

“Cases of staff being terminated are very rare and usually for disciplinary reasons. However, there have been cases where contracts have not been renewed, usually citing performance difficulties, but which we believe to have been abusive circumstances. But it’s thankfully rare,” said Richards.

Where there is a big concern going forward is the General Assembly’s approval of a new mobility policy under which appointments and moves of D-1 and D-2 staff – both at director levels — will be managed by the Secretary-General’s office (making them virtually political appointments and not regular staffers).

“This could have serious repercussions as those who don’t toe the line could be threatened with a move to an undesirable duty station,” he added.

In closed-door consultations with the 15-member Security Council Thursday, the secretary general said: “I cannot express strongly enough my distress and shame over reports of sexual exploitation and the abuse of power by U.N. forces, police or civilian personnel.”

With respect to the allegations and cases in the Central African Republic, the time had come for a strong signal that leaders will be held responsible, he said.

“This is why I asked for the resignation of General Babacar Gaye despite his long and illustrious service to the United Nations.”

“In the case of peacekeeping missions, accountability begins at the top, with the Special Representative of the Secretary-General, and carries through each level of management and command.”

On Friday, he convened an extraordinary meeting of his Special Representatives, Force Commanders and Police Commissioners in all 16 peacekeeping missions to send the unequivocal message that they are obligated – every day and every night – to enforce the highest standards of conduct for all.

It is squarely their responsibility to ensure justice and to communicate to the Secretariat the results of their actions.

“All too often this is not done quickly enough – and in the most frustrating cases, it is not done at all,” Ban said.

“When the Secretariat does receive information about the actions taken in substantiated cases of sexual exploitation and abuse, I am frustrated by what appear to be far too lenient sanctions for such grave acts affecting men, women and, all too often, children.”

A failure to pursue criminal accountability for sexual crimes is tantamount to impunity, he warned.

“That injustice is a second blow to the victims – and a tacit pass for the crimes we are trying so hard to end.”

Referring to the firing of the Special Representative, Dujarric told reporters: “As you know, the Secretary-General did not take this action based on one particular case.”

He took it based on the repeated number of cases of sexual abuse and misconduct that have taken place in the Central African Republic.

“According to our numbers, we had 57 allegations of possible misconduct in the Central African Republic reported since the beginning of the mission in April 2014. And that includes 11 cases of sexual abuse, possible sexual abuse. Those cases are being investigated,” he added.

Deployed in early 2014, the UN Multidimensional Integrated Stabilization Mission in the CAR, known by the French acronym MINUSCA and headed by the dismissed Gaye, has been trying to defuse sectarian tensions across that country.

More than two years of civil war and violence have displaced thousands of people amid ongoing clashes between the mainly Muslim Séléka alliance and anti-Balaka militia, which are mostly Christian, according to the United Nations.

In addition, the Lord’s Resistance Army (LRA), a militant group, continues to operate in the south-eastern part of the country.