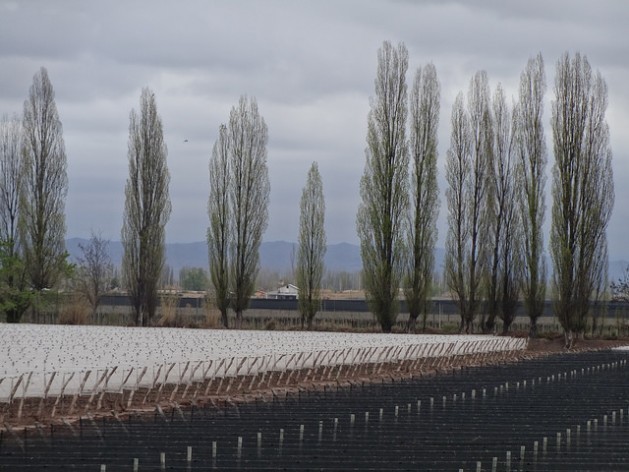 Vineyards belonging to the Dominio del Plata winery in Luján de Cuyo in the Argentine province of Mendoza. It is one of the companies taking part in the Federal Programme for Cleaner Production, which involves a sustainable reconversion inthe wine-growing industry. Credit: Fabiana Frayssinet/IPS

LUJÁN DE CUYO, Argentina , Oct 20 2015 (IPS) - The region of Cuyo in west-central Argentina is famous for its vineyards. But it is one of the areas in the country hit hardest by the effects of climate change, such as desertification and the melting of mountain top snow. And local winegrowers have come up with their own way to fight global warming.

In the cup, malbec, Argentina’s flagship red wine, still has the same intense flavour and colour.

But behind the production process is a new environmental reconversion, which began four years ago in the arid province of Mendoza, where vineyards bloom in the midst of oases created by human hands.

Only 4.8 percent of the desert province of Mendoza is green; 3.5 percent is dedicated to agricultural production, which uses 90 percent of the water consumed, and the rest is urban areas.

“Many people think investing in ecological practices has an additional cost and won’t necessarily bring the company any benefits. This shows that is not the case.” -- René Mauricio Valdés

The initiative, launched by the national Secretariat of the Environment and Sustainable Development, benefits some 1,250 small and medium-sized companies in Argentina.

It is carried out with technical and administrative support from the United Nations Development Programme (UNDP) and funds from the Interamerican Development Bank. In Mendoza, 210 companies – 60 percent of them wineries – are participating. They receive advice and up to 28,000 dollars in funds.

“We’re producing the same wine, but in a sustainable manner,” said Luis Romito, the head of the Sustainability Commission of the Bodegas de Argentina wineries association, while participating in the Climate Change Forum organised this month in Mendoza by the National University of Cuyo and the UNDP.

Some of these practices have begun to be implemented by Dominio del Plata, a family winery at the foot of the Andes mountains, in Agrelo, a town in the department of Luján de Cuyo.

By changing equipment and modifying processes, the family business has managed to use less water in the production of its wine.

In the wine production process, water is mainly used for washing, rinsing, heating and cooling.

One example of the changes introduced was the replacement of manual washing of the grape picking lugs, which took some 20 minutes per unit, by automated industrial washers.

“The lug is washed in five minutes with this machine,” Marcelo del Popolo, the winery’s adviser on quality and environmental responsability, told Tierramérica. “We have reduced water consuption by some 60,000 litres a month. In three months of harvest, that’s 180,000 litres of water saved.

“And the water used in the washing process goes down a drain and is carried to a treatment plant, and is then used to irrígate the vineyards,” he said.

And irrigation systems are being improved in Mendoza, where 90 percent of water is used in agricultural activities, and where water shortages are increasingly severe as a result of global warming.

“Water is vital to our province, and we are being seriously affected by this problem,” Ricardo Villalba, an expert in geosciences and former director of the Mendoza-based Argentine Institute of Snow Research, Glaciology and Environmental Sciences, told Tierramérica. “Water is the element that controls regional development.” 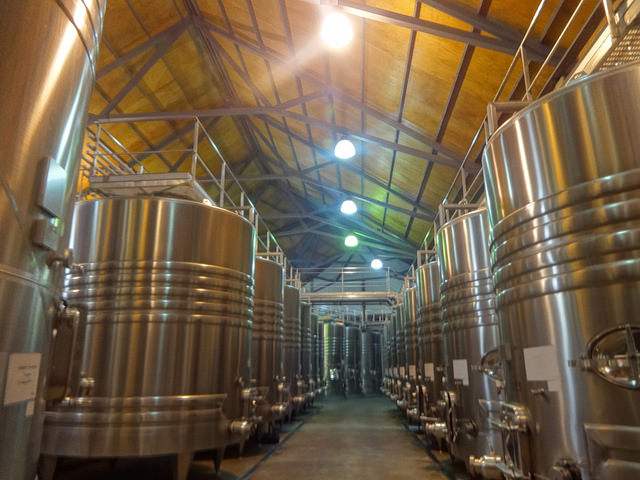 Wine storage tanks with special jackets maintain temperatures more efficiently in wineries in the wine-growing region of Luján de Cuyo in the Argentine province of Mendoza, which are taking part in a special programme to create more green-friendly processes to help combat the effects of climate change. Credit: Fabiana Frayssinet/IPS

“Our province basically depends on the water that comes from the snow up in the mountains, and all of the global forecasts and models indicate that there will gradually be less and less snow,” said Villalba, who is a member of the Intergovernmental Panel on Climate Change (IPCC).

The wine-growing industry, which represents six percent of GDP in Mendoza and 1.3 percent of GDP nationwide, also aims to reduce energy consumption, which in Argentina is responsible for 43 percent of greenhouse gas emissions.

In the wineries, energy is used for heating, cooling, pumping of liquids and lighting.

“In each one of these stages we can incorporate modifications of equipment or processes, which make significant energy savings possible,” Micic said. “From jackets on the tanks to maintain temperatures more efficiently to the installation of advanced new pumps for a stronger water flow and lower energy consumption, through the change of compressors and lighting.”

Del Popolo said: “We keep track here of the water that comes in and the temperature we manage to achieve. By doing this we have reduced the energy used for heating by 15 percent.”

The company also uses green-friendly materials like lightweight wine bottles and lighter boxes that use less cardboard. Plastic and other waste products like broken bottles are classified, recycled and reused.

“We’re using boxes that we have already recycled many times over,” he said.

The benefits to the environment also bring considerable cost savings.

“We have addressed two fundamental questions: savings in energy and in water. And in both of them, we’re also seeing significant economic savings,” said the head of the winery, which plans in the future to invest in a solar thermal system for heating and fermentation.

This, according to UNDP representative in Argentina René Mauricio Valdés, is what makes the project self-sustainable.

“Many people think investing in ecological practices has an additional cost and won’t necessarily bring the company any benefits. This shows that is not the case,” said Valdés during a visit to the winery.

Fincas Patagónicas Tapiz, an olive oil producer in the neighbouring department of Maipú, is another company taking part in the programme in Mendoza.

Among other measures, it implemented a system to circulate water heated by solar energy around the tanks of oil to eliminate that energy expense.

It also insulated the room holding the tanks of oil, to keep the temperature steady. This made it possible to avoid the need to use air conditioning in the entire plant, which consumed an enormous amount of energy.

“If the temperature of the oil drops below 14 or 15 degrees Celsius, it solidifies and I can’t filter it,” plant manager Sebastián Correas explained to Tierramérica. “Which means that in the (southern hemisphere) winter I have to keep heating the entire plant until the warmer temperatures of September and October make it possible to bottle the oil.”

Argentina is not one of the world’s top emitters of greenhouse gases. Producing 0.66 percent of all greenhouse gases released globally, it is 22nd in a ranking that counts the 28 European Union countries as a single bloc.

But Villalba, the scientific researcher, believes that Argentina, like Mendoza, has a role to play.

“We are going to have to prepare ourselves for this, for example to continue to be leaders in the production of malbec at a global level,” he said.