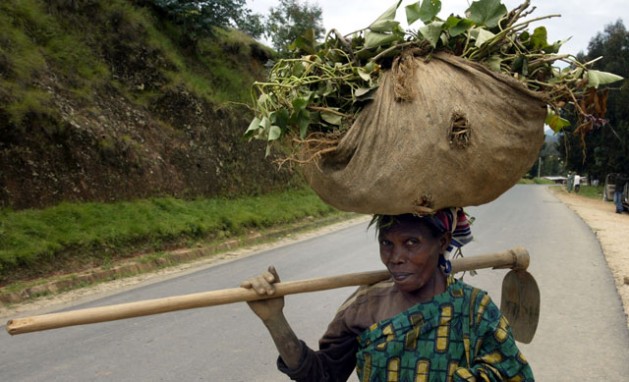 KAMPALA, Uganda, Nov 26 2015 (IPS) - Climate Change needs to be at the top of the country’s agenda, according to a project examining Uganda’s policies. It says the country hasn’t paid enough attention to climate change in national development and agriculture plans and this needs to be turned around before it’s too late.

The Policy Action for Climate Change Adaptation (PACCA) project that seeks to inform and link policies and institutions from the national to the local level for the development and adoption of climate-resilient food systems in Uganda says the policies are scattered and need harmonisation.

Edidah Ampaire, the Coordinator of the Policy Action for Climate Change Adaptation, told IPS that apart from lack of harmonisation of policies at the national and institutional levels, many of Uganda’s policies need to be reviewed to incorporate climate change and agriculture.

“Most of the policies were developed when climate change was not an issue. So they tend to focus on just environment although implicitly they talk about sustainable management of natural resource use, which are also interventions that help farmers to be climate resilient but they don’t explicitly talk about climate change,” said Ampaire.

The PACCA project, led by the International Institute for Tropical Agriculture (IITA), also works in Tanzania. Asked about the situation in Tanzania, Ampaire said Tanzania is not so different from Uganda. “The situation in in Tanzania could be even worse if compared what is happening in Uganda especially at local or community levels,” she said.

Ampaire said evidence in Uganda and Tanzania shows that at the moment the policies are not only fragmented and poorly implemented, but the various actors are also insufficiently coordinated and their roles are not clear.

One of the striking findings according to Ampaire was that all those policies did not articulate gender issues in climate change adaptation measure.

“What we found within the policies themselves is that they don’t sufficiently cover gender issues. They don’t make particular provisions for particular groups. And I think that is what brings problems especially at lower level,” Ampaire told IPS. “They should put strategies that address those inequalities amongst different groups like youth, women. Because in Uganda, eighty per cent of agricultural labor is provided by women but they are not included anywhere and they don’t control any resources,” She told IPS.

Similarly, for the case of Tanzania, Ampaire said the Initial National Communication (INC) and the National Adaptation Plan of Action (NAPA) developed by the Government of Tanzania for the United Nations Framework Convention on Climate Change (UNFCCC) did not incorporate gender considerations.

She said from Ugandan perspective, the recommendations were based findings of a study that had looked at the gaps in national policies and strategic plans in Uganda. The study provides recommendations for improving gender inclusiveness in Climate Smart Agriculture adoption and adaptation planning.

Ampaire told IPS that Climate Smart Agriculture must be all inclusive and not benefit one group at the expense of the other.

Finding of another study by PACCA in Uganda on gender and climate change found that gender and climate change issues are generally treated as cross-cutting issues, not given priority or a clear allocated budget. “Gender mainstreaming in most of the reviewed policies is an addendum rather than an integral aspect of the respective policies,” reads part of the report entitled “Gender and Climate Change in Uganda: Effects of Policy and Institutional Frameworks.”

“The way in which gender issues are approached in agriculture-related policies and strategies in Uganda is diverse and not homogenized. There is need for stronger cross-sector coordination and accountability since gender mandates for respective interventions fall under different ministries and agencies,” says the report co-authored by Edidah Ampaire, Wendy Okolo and Jennifer Twyman.

In the Masaka and Rakai Districts in the south of Uganda over ninety per cent of the people depend on subsistence agriculture. Most farming is on sloping land between hilltops and valley swamps with the average farm size between 2 and 3 acres.

Here population pressure is resulting in encroachment both on the riverine swamps which feed the Nile system, and also steeper slopes and watersheds. The area’s two rainy seasons have become less predictable and weaker over recent years.

Farmers face problems of water availability and depleted soils, and need to make better use of natural precipitation but the national and local environment and climate change policies are silent about the specific needs of this area.

Andrew Nadiope, is a climate change expert from Uganda’s Ministry of Local Government. His ministry has been working with PACCA to analyse policies in under the decentralised climate-change response. “We have realised that when we plan, we need to plan with climate change in minds because once we document some of the peculiar needs of specific areas, then adaptation measures can be more targeted,” Nadiope told IPS.

Rakai District located in the southwestern part of the Central Region of Uganda is water stressed and groundwater in the district often has excessive iron concentrations. The district with a population of close to half a million people faces severe water shortage. The local administration with support from central government constructed over 1300 shallow water points like boreholes but many of those have been non-functional for more than five years and are considered abandoned because the water is too salty.

Jude Sewankambo a farmer in Kagamba in Bugamba Sub County told IPS that the construction of water points was a typical case of poor planning. He explained that communities like his were not consulted when those water points were put up. “We ended up wasting money on ground water projects and we would have gone for options like rainwater harvesting,” he said.

He said his wife and children have subsequently been forced to take over a two kilometer journey for fresh water from the river.

Sewankambo told IPS that he and his wife were taught about how to construct rain water harvesting tanks but he noted that constructing such tanks required a lot of money. “If you want a ten cubic meter water tank, you pay close to 800 dollars, for rain bags of one thousand to one thousand five hundred litres, you need about 200 dollars. Many of the people here don’t have that money,” he said.