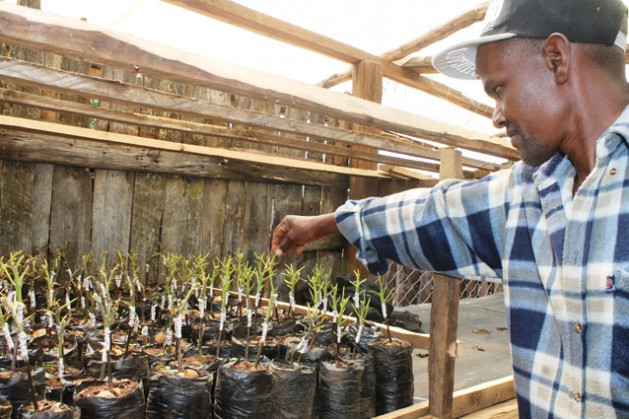 Peter Karanja at a seedbed that has recently grafted seedlings. He has been licensed by the Horticultural Crops Development Authoreity (HCDA) to graft the seedlings and distribute to farmers. Credit: Robert Kibet/IPS

NJORO, Kenya , Dec 3 2015 (IPS) - Maize farming in Kenya is becoming a loss making venture and farmers who depended on the crop’s popularity for years are forced to abandon it for safer and more money making opportunities.

Six decades ago, said Peter Karanja,44, his father could harvest more than 30 bags of maize per acre of land. “Now with a family to fend for, in the same size of land today, I rarely exceed 15 bags per maize harvesting season,” Karanja told IPS.

This East African nation and surrounding countries have steadily relied on maize for years. But this can be a disaster. Climate change, compounded by maize viral disease, the Maize Lethal Necrosis Disease (MNLD), hit hard at farmers, who depend mostly on maize production.

A resident of Njoro, one of the agriculturally rich areas of Kenya’s Rift Valley highlands, Karanja has joined thousands of farmers who are considering switching from farming the nation’s lead staple maize, known in Kenya as ugali, to other climate-resilient crops.

Karanja worked as a farm manager in Thika, where he learned the art of grafting avocado tree seedlings.

“When my employer introduced avocado farming to his farm, he tasked me with planting. I would later be taken through training on how to graft avocados, after his employer was duped to purchase variety contrary to the Hass variety which he wanted,” says Karanja.

The Hass avocado is a generous bearer of fruits, a semi-spreading tree requiring at least 40 by 40 feet planting distance at maturity.

This warty, medium sized, roundish fruit that turns purple at full maturity, has a tough, pebbly skin, an impressive shelf life and attracts the market.

Karanja later quit his farm managerial job went back home and was greeted by the deadly effect of the maize viral disease that turned Kenya’s South Rift region into a hunger zone. He tried potato farming, but this is a venture that is prone to exploitation by middlemen.

“At the moment, I have about 400 fully grown Hass avocado trees on my farm,” says Karanja, whose recent first harvest was 3,000 fruit that fetched him about 198 dollars.

About half a kilometer from Karanja’s homestead is Rusiru farm where Karanja planted Hass avocado trees. This is a service offered by Karanja to the farm owner.

Perminus Mwangi, the farm manager says the farms used to be occupied with maize harvesting but with minimal outcome. Instead avocados look like a safer bet.

“Last week, we harvested 6,300 fruit, even those considered rejects each fetched 15 Kenyan Shillings, amounting to 94,500 Kenyan Shillings. (886 dollars) when we sold to a ready market at the coastal city of Mombasa.” he told IPS.

Late last year, the Kenyan government in collaboration with the World Bank planned to set aside 1.4 million dollars to tame the maize viral disease that ravaged some 18,000 hectares of maize farms.

Rusiru farm’s three parcels of land are now home to 1,038 Hass avocado trees and Mwangi says that this may just be the answer to the deadly maize viral disease which has cost farmers.

With the African Union (AU) having declared 2014 as ‘The Year of Agriculture’ still over 70 per cent of African households survive on subsistence farming. Agriculture remains a big contributor to the African economy accounting for over a fifth of the continent’s GDP.

Dr Johnson Irungu, director of crops at the Ministry of Agriculture supported efforts by the AU to intensify efforts of the Comprehensive Africa Agriculture Development Programme (CAADP) that targets reaching the goal of a viable 6 per cent average annual growth rate in agriculture by this year, 2015 measured over the past 12 years.

Augustin Wambo Yamdjeu, head of Comprehensive Africa Agriculture Development Programme (CAADP), a NEPAD agency expressed his concern at the rate in which extension services in the agricultural sector are diminishing.

“With national research institutions in many African countries working in isolation from the Ministry of Agriculture coupled with weak extension services to smallholder farmers, we have reason to worry about crucial information not reaching smallholder famers,” said Dr. Yamdjeu.

Mary Wanjiru, a victim of Kenya’s 2007 post-election violence, now residing in central Kenya says she reaps a lot from Hass variety farming.
“I planted 150 Hass variety in 2008 and they started fruiting in the fourth year. I harvest twice a year with each tree giving me an average of 60 fruits per season,” she said.

On average, given the statistics and market prices, she can more than double her money with avocado farming.

“In one hectare of maize farm, I rarely make 100,000 Kenyan Shillings after waiting for a whole year. Avocado farming has lifted me,” she told an interview with IPS.

Climatic conditions in most parts of Kenya are ideal for Hass variety farming, they are sensitive to wind, which can cause fruit drop and defoliation.

Although it attracts a ready market to Europe, the Kenyan avocado supply still suffers from around 15 per cent food loss at different stages of the avocado journey from farm to importer.

Nakuru County, home to Karanja, has this year witnessed a 50 per cent maize loss due to frost and erratic rainfall, with the county’s agriculture executive saying of the expected 2.7 million bags of maize, only 1.3 to 1.5 million bags are anticipated. This is a huge loss for a country so dependent on one staple.

Kenya is ranked as the sixth-largest avocado exporter to Europe, enjoying a competitive advantage over Peru, its main competitor in Europe, with the Kenyan Hass harvesting season extending later in the year than Peru’s granting Kenya a valuable window of opportunity.