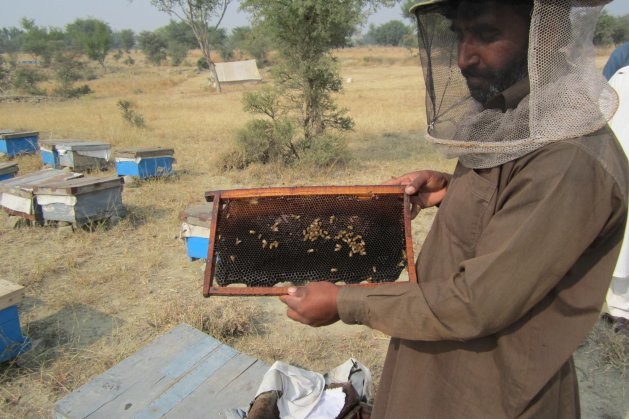 CHAKWAL, Pakistan, Dec 15 2015 (IPS) - Farmers in the rain-dependent district of Chakwal in Punjab province of Pakistan are finding relief in beekeeping as the groundnut crop suffers a blow from shifting rainfall patterns.

Drought conditions in the district have worsened over last six years, making crop raising less viable and prompting migration of many farmers to nearby urban areas.

But some farmers are gradually learning other trades to survive the negative impacts of climate change on agriculture in the area.

Groundnut farmer Hakim Khan, who lives in Ghool village of the Chakwal district, is finding that he is able to cope with the loss of more than half his crop in each the past three years. That’s because additional earning from beekeeping has helped him survive financial losses from the recurring groundnut crop failures.

“I no more feel worried if my groundnut crop on my three acres posts losses. Because, income from beekeeping has helped me survive crop losses. Income from honey selling in the local market has helped me compensate the crop losses,” Ibrahim told IPS while examining the wooden bee-boxes lying strewn on a portion of land where he cultivates groundnut.

He was among 141 lucky beneficiaries who were imparted beekeeping training and were financially supported by Pakistan Poverty Alleviation Fund (PPAF) under its Drought Mitigation and Preparedness Project in different villages of the Chakwal district.

Farmers say income from climate change-vulnerable farming is now less reliable as compared to income from beekeeping, which is reliable, constant and sure to come.

He said that beehives neither demand additional land space nor do compete with agriculture or animal husbandry for any input and is easy to manage and beekeeping can be initiated even with as less investment as 10,000 Pakistani rupees.

“I produce around 800 kilos of honey annually I earn from it more or less 600,000 Pakistani rupees or 5,760 dollars a year, that too with less intense labour and without any fear of loss from erratic weather patterns,” he said.

Another beekeeper Ahmed Nawaz said that he would have defaulted on his loan and fallen into a debt trap of a private moneylender, if he had not established bee farming in his two hectare field.

Given the repeated crop failures and with drought conditions prolonging in his area, he plans to use a portion of profit from beekeeping income to buy five more boxes of hives, farmer Ahmed Nawaz said, who no owns 11 wooden boxes of hives.

Each box contains four to five hives the farmers own in Ghool village.

Jehan Khan of Ghool village has also faced financial losses and feels on verge of losing his livelihood as his groundnut crop production has fallen steadily over last five years.

The 32-year-old farmer blames scarce and erratic rainfall for the more than 60 per cent drop in his crop yield.

Nearly 90 per cent of around 1.5 million people eke out livelihood from agriculture, which is highly dependent on rainfall.

In recent years, the region has seen significant decline in the rainfall it receives, a change the experts attribute to climate change.

“When rains were profuse some 8 to 10 years back, locals grew wheat, groundnuts, maize and pulses,” recalls Hussain Khan, a 61-year-old groundnut farmer. “But the area under these crops has shrunk over 60 per cent in Chakwal and remains barren for want for water.”

“Last year, per acre yield of my groundnut crop remained less than 200 kilos. Rains were down by 70 percent during the sowing season,” he griped while spreading his harvested groundnut in courtyard of his mud-made home for drying as sun hovered over his produce.

“Groundnut yield reaches beyond 400 kilos per acre if there are good rains. But we have no good rains since 2007,” Husssain Khan told IPS.

Other than worrying over that how would he feed his three children and wife until next groundnut sowing season, what he worries about is that how would he manage to clear his 65,000 Pakistani rupees or 617 dollars loan he borrowed from a private money lender.

In Chakwal alone, groundnut is sown on around 80,000 acres (32,375 hectares). The sowing sets off in the last week of March to the mid of April and continues till May-end. Fitful rainfall spells are needed from June to August to drench the groundnut areas, so that groundnut seed sprouts by end of August.

“A target of 70,000 acres (28,328) was set for this year’s sowing season. But hardly 50 per cent of the target could be achieved for want of good rains”, Dr Mohammad Khalid, Chakwal district agriculture officer, told IPS.

Groundnut crop in the area is considered a dream crop because earnings from it help farmers clear their debts and dispose of marriages of their children. 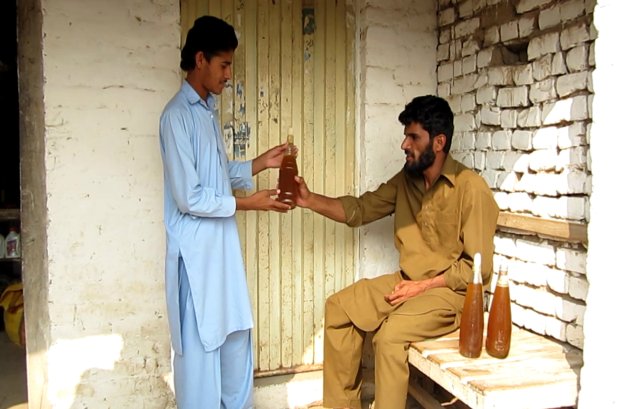 A shopkeeper sells honey at his shop in Ghool village of the Chakwal district, about 90 km (56 miles) south-east of Islamabad, Pakistan’s capital. Saleem Shaikh/IPS

Today Nearly 73 farmers in the Ghool village have adopted beekeeping as additional source of income to avoid financial fallouts of crop failure, said Rab Nawaz, a biggest bee farmer in the village with 400 hives.

He told IPS over phone from the Ghool village that though the number of farmers adopting beekeeping as alternative source of income is on constant rise, there are around 16,000 hives in around 4,000 wooden boxes owned by the 73 bee farmers.

“They together produce some 0ver 35,000 kilos oh pure honey or 35 tons of honey of worth estimated 28 million Pakistani rupees or 268,800 dollars,” he calculated.

He told IPS that being highly profitable, farmers earn enough profits from beekeeping. Some times 50 percent of the total earning is profit, which then often depends on the quantity honey farmers get from each of their hives.

Zafar Pervez Sabri, senior climate change mitigation and adaptation expert at PPAF said that over a number of farmers, whose livelihood is at stake because of impacts of climate change on their agriculture activity, have been trained in different trades as a part of drought mitigation interventions in the area.

He said, “Actually, we want to impart them [farmers] different skills to keep their livelihoods intact even if their incomes from crop cultivation drop, as drought effects become more evident on their socio-economic lives.”

Under a multi-million rupee “Livelihood Enhancement and Protection Project (LEPP)” that was first implemented in 1992 by the Pakistan Poverty Alleviation Fund in collaboration with the National Rural Support Programme, 150 farmers in Chakwal district have been trained in beekeeping. Many of them have already shown improvement in their lifestyle as a result of additional income from this trade and many have started sending their children back to school.

“Having seen tangible socio-economic impacts on lives of farming communities in drought-prone Chakwal district, we have plans to expand these alternative livelihood plans to different parts of Pakistan, particularly Bhawalpur and Tharparkar. For, crop failures are common phenomena in these rain-fed areas – conditions that often make farmers land into debt traps and fall prey to exploitative private moneylenders,” Zafar Pervez Sabri explained while talking about future plans. 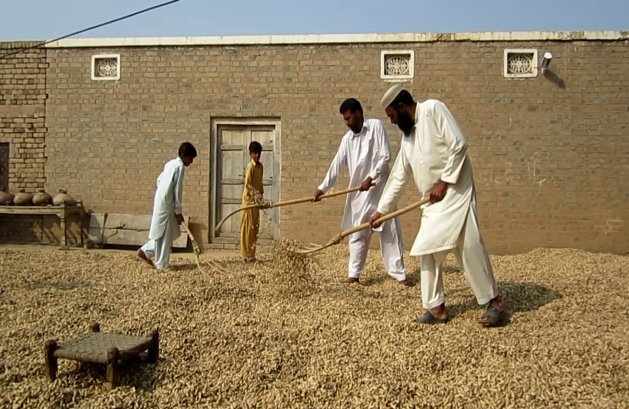 Farmers spread their produce under the sun in the courtyard of their home in Ghool village of the Chakwal district, about 90 km (56 miles) southeast of Islamabad, Pakistan’s capital. Saleem Shaikh/IPS

“Single blow of a flood or no rain in one cropping season or non-availability of water in the river system due to delayed glacial melt can ruin farmers and plunge them into a quagmire of debt. They solely depend on farming as a source of livelihoods. However, imparting trainings and skills of alternative climate-resilient livelihoods like beekeeping can go a long way in making farming communities resilient to climate change impacts and protect their livelihoods,” he indicated.

The Director-General for Climate Change at the Ministry of Climate Change, Irfan Tariq underlines the need to promote such alternative livelihood plans to other parts of the country, which are reeling under severe impacts of changing weather patterns.

“Concerted efforts need to be taken at government level to promote such climate resilient plans throughout country, to make communities, which are vulnerable to climate change impacts to make them resilient financially,” he emphasised.

Local farmers see loss of vegetation, deforestation, particularly felling of berry trees in the area pose a risk to sustainability of beekeeping. “But, we beekeepers have united against those chopping trees,” Hakim Khan told IPS

Pakistan Beekeepers Association (PBA) President Naeem Qasmi said that cutting of berry trees at a fast pace was affecting production of honey in the country, especially in Pothohar region. “The cutting of berry trees is rampant without any checks and if it is not stopped, the business of honey would be adversely affected,” he said.

He says unlike many other trees, berry blossoms from mid-September to mid-October and this is the period when honeybees do wonders in their hives by the nectar extracted from the flowers,

He said that farmers in the area are still unaware of the added advantage of crop pollination role the bees play.

But Muhammad Asif Aziz, Entomologist Arid Agriculture University in Rawalpindi city in northern Punjab province, says farmers would be more in love with bees once they come to know that what a wonderful miracle bees play in shape of crop pollination required for increasing crop yields.

He emphasized need for awareness among farmers about unprecedented importance of honeybees, which give 15-20 times more value in the form of crop pollination.

“In USA farmers pay US$ 150 per hive per season as a rent for crop pollination to the beekeepers. But the beekeepers in Ghool village are providing this service free of cost to crops in their area and that though without knowing,” the entomologist said.

Asif Aziz says farmers should be informed that honey bees are the most efficient pollinators among insect and be warned that how decline in beekeeping activities is more likely to affect the production in agriculture commodities particularly fruits, vegetables and oilseed crops.