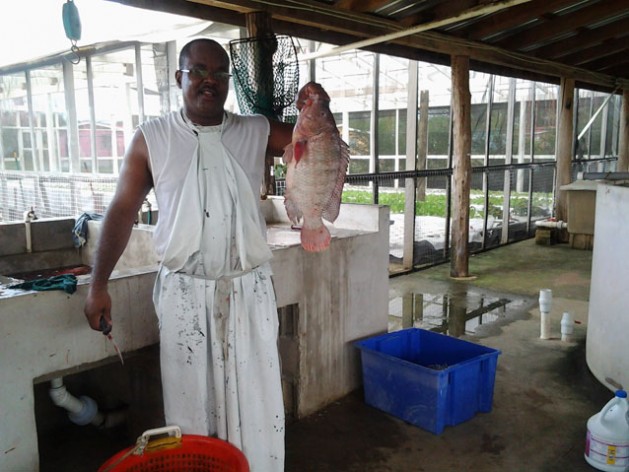 KINGSTON, Jamaica, Dec 10 2015 (IPS) - Jimmi Jones and wife Sandra Lee’s fish farm in Belize City is unique. His fish tanks supply water and nutrients for his vegetable garden needs and the plants filter the water that is recycled back to the tanks.

Jones has been showing off the “JimSan Aquaponics” style of organic farming in meetings across the Caribbean to support efforts by the Caribbean Regional Fisheries Mechanism (CRFM) in promoting aquaculture as a food security option in combatting global climate change.

As global warming increases sea temperatures, wild catch fishery could decline by as much as 50 per cent, the Intergovernmental Panel on Climate Change (IPCC) has warned. Warming seas are expected to devastate regional fisheries by shifting the travel routes of pelagic fish and the distribution of high-value species while causing die offs of many other popular marine species.

A Sept 2015 study from the University of British Columbia noted that warmer seas could alter the distribution of many marine species and worsen the effects of pollution, over-fishing and degraded habitats, resulting in economic fallouts worldwide.

To ensure food security, the CRFM, the regional body responsible for the responsible use of regional resources, is promoting aquaculture as part of a range of initiatives to build climate-resilient fisheries. A five-year plan has been drafted by the Secretariat and a working group established to guide the process.

The CRFM strategy is among activities the Technical Centre for Agricultural and Rural Cooperation (CTA) proposed to lessen the impacts of climate change on small-scale producers.

Jones’ aquaponics operation illustrates how aquaculture can help farmers, particularly small subsistence fish and food farmers, to boost their family income while providing adequate food and protein for the table.

With modifications, this method of aquaculture can be applied on large or small operations; it reduces water use by 90 per cent while allowing farmers to produce up to 10 times more vegetables than terrestrial plots within the same footprint, while eliminating the need for pesticides and other chemicals. The addition of renewable energy systems could further reduce production costs.

“In essence you feed the fish, they produce waste, the waste goes through a bacterial process that breaks it down from ammonia to nitrate, which is basically plant food, along with other processes that happen. You’re growing fish and vegetables using the same infrastructure; the water goes through a filtration system and you grow the plants without using soil,” Jones explained.

Despite what seems to be an easy enough undertaking, aquaculture has been on the decline in the Caribbean. In 2012, production plummeted from between 5,000 and 6,000 tonnes to 500 tonnes when the Jamaican fish-farming industry collapsed under pressure from cheap imports.

Aquaculture production in Jamaica, at one time the largest producer in the region, fell from around 11,000 tonnes in 2010, to just over 7,700 in 2011, falling even further in recent years.

Jamaican fish farmer Vincent Wright pointed to government policies that have made it difficult for them to compete. “The global economic downturn, high cost of energy, theft and a lack of adequate and suitable water supplies have made things even harder,” he said.

Executive Director of CRFM Milton Haughton has challenged regional governments to implement systems and regulations that will help investors to “overcome the impediments” aquaculture farmers face.

“We do need to provide the necessary legislative and regulatory framework, the policy support and the incentives to our fish farmers and private sector investors, so that they can grow the sector and increase production, not only for local consumption but also for exports,” he said.

In the last year or so, the CTA and the CRFM partnered to review the development aquaculture in region and in bid to identify the challenges, find solutions and guide the re-development of the industry, Haughton said. Among the improvements, policies regarding the development and distribution of land and water, as well as the production of brood stock and food.

Wright, who is also a scientist, said most Jamaican fish farms are built on marginal lands that are prone to flooding and with limited access to water. Given the locations and the existing conditions of local farms, climate changes will likely cause increased flooding, and disease, while reducing the availability of water for farms during periods of drought, he said.

The admission of Martinique and Guadeloupe to the CRFM family in 2014 is making up for the lack of research in the industry through Martinique-based French Research Institute for Exploitation of the Sea (Ifremer) , an organisation with decades of research and development experience in tropical fish culture, nutrition, disease and mortality in farmed species.

The Centre also draws on the expertise of the national research capabilities of the French Republic. Before now, the 18-member states of the CRFM were short on aquaculture research. Now Ifremer is committed to helping the region develop its research capabilities. Useful as climate change is predicted to have serious economic effects on world wild catch fisheries.

But while scientists predict heavy losses for the Caribbean, they also suggest there is sufficient information for governments to begin to develop policies to help the industry adapt to the expected changes.

Jones sees aquaculture as a way of adaptation to climate change. This year he expanded the 111.5 square metre (1,200 square feet) green house to 557 sq metres (6,000 square feet), to double production in the short term with the possibility of a five-fold increase at peak agricultural production periods.

Jamaica and across the Caribbean were affected by extended droughts in the last two years and forced Wright and his counterparts to cut back production, but Jones’ green house and fish tanks were not affected. The system lost roughly one per cent, between 379 litres and 750 litres (100 and 200 gallons), from roughly 53,000 litres (14,000 gallons) of water running through the system at any one time, he said.

“Aquaculture is the way to go if we are to provide adequate protein for our people,” he said.

In fact, the position is supported by the findings of the Food and Agriculture Organisation (FAO) in its 2014 State of Fisheries and Aquaculture report.

“Based on its dynamic performance over the last 30 years, with the fairly stable catches from capture fisheries, it is likely that the future growth of the fisheries sector will come mainly from aquaculture,” the report said.

Regional growth has, however, remained static.

Regardless of the methods used, aquaculture “offers the region the best opportunities to provide a healthy, safe, guaranteed supply of food for our people,” Jones said.