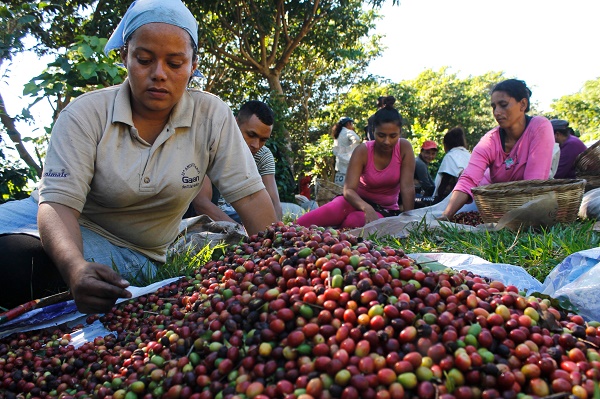 Ilsy Membreño separates green and red coffee beans, part of the tasks involved in the harvest on the Montebelo farm in El Salvador. The drop in production caused by coffee leaf rust has driven wages down to just three dollars a day. Credit: Edgardo Ayala/IPS

EL CONGO, El Salvador , Dec 18 2015 (IPS) - Sitting in front of a pile of coffee beans that she has just picked, Ilsy Membreño separates the green cherries from the ripe red ones with a worried look on her face, lamenting the bad harvest on the farm where she works in western El Salvador and the low daily wages she is earning.

As it spread through this country and the rest of Central America, the fungus (Hemileia vastatrix) that causes coffee leaf rust infected the farm where she works.

“There is less coffee to pick, and in the end there is less money for us,” lamented Membreño, one of 30 people working in the harvest on the Montebelo farm in the municipality of El Congo in the western Salvadoran department (province) of Santa Ana.

The parasitic fungus feeds off the leaves of the plants, infecting them with yellow and brown spots. The leaves fall off and the beans are unable to mature.

Coffee production generates some 150,000 direct jobs and 500,000 indirect jobs, according to the report “Coffee Cultivation in El Salvador 2013”, drawn up by the governmental Salvadoran Coffee Council (CSC). Between 1995 and 2012, coffee represented 7.5 percent of the country’s total exports.

The fungus threatens to further impoverish El Salvador’s rural areas, where 36 percent of households already live in poverty, according to the government’s Multiple-Purpose Households Survey 2013.

Membreño told IPS that before the coffee leaf rust outbreak ravaged the farm, she picked two quintals (92 kilos) a day, earning around eight dollars a day during the three-month harvest.

“The disease caught us with our pants down.” -- Julio Grande

“But now I don’t even manage to pick one quintal, and I earn just three dollars a day,” she said with resignation.

The other day labourers who talked to IPS described a similar situation when we visited the privately-owned farm, which is 116 manzanas (a manzana is equivalent to 0.7 hectare) in size.

Climate change has also hurt the coffee crop, with lengthy droughts in the rainy season and heavy rains in the dry season.

“The rain has knocked the coffee beans off, and we lose time picking them up,” said Sonia Hernández, a mother of three who is also working on the Montebelo farm, told IPS.

“Without a harvest, these poor people don’t have work,” Manuel Morán, the foreman, told IPS.

Montebelo is in the Apaneca-Lamatepec mountains, where conditions are perfect for coffee cultivation. But neither corn nor beans, the staples of the Salvadoran diet, are grown in the area.

And without land to grow subsistence crops or money to buy food, the people in this rural community face threats to their food security.

“We don’t have anywhere to plant corn or beans, we depend on our work on this farm for a living,” said Membreño.

There are approximately 19,500 coffee growers in the country, 86 percent of whom are small farmers with less than 10 manzanas of land, who represent 21 percent of the total national output, according to the CSC.

“Outside of harvest time, we gather firewood, that’s how we support ourselves, because there isn’t anything else here,” said Membreño, who has an eight-year-old son. Her husband works in the same activities.

Coffee leaf rust, found in El Salvador since the late 1970s, began to spread rapidly in 2012. But the devastating effects were not felt until 2013, and caught coffee growers as well as the government off guard.

“The disease caught us with our pants down,” Julio Grande, a researcher at the governmental National Centre of Agricultural and Forest Technology (CENTA), told IPS.

In one area of the Montebelo farm, he is studying the biology of the parasite and the epidemiology of the disease, while testing fungicides.

The idea is integral treatment of the disease, simultaneously focusing on fertilisation of the plant, pruning, and the use of fungicides, he said.

These three elements together can bring good results, he added.

In fact, in the areas where he used fungicides, the coffee bushes are relatively healthy, and out of danger.

“The fungicides work, but if the other aspects of the equation are neglected, the effect is limited,” he added.

Renewing coffee plantations is an effective technique, because the older the plants, the more vulnerable they are to the fungus, the researcher added. El Salvador’s coffee trees are considered old – over 30 years old.

Besides technical assistance, fungicides and other inputs, the government distributed around eight million coffee rust-resistant plants to 4,200 farmers, to begin a process of renewal of their fields, Adán Hernández, manager of Centa’s coffee division, told IPS.

And on their own, farmers have planted another eight million, he added.

But large-scale renovation would require heavy government investment, to buy from private nurseries the 300 million seedlings needed to plant the 217,000 manzanas of coffee bushes in the country. And at any rate, there are not enough seeds available to do that.

Meanwhile, sitting next to the pile of coffee cherries, Ilsy Membreño has just one thing on her mind: how to get by on three dollars a day.