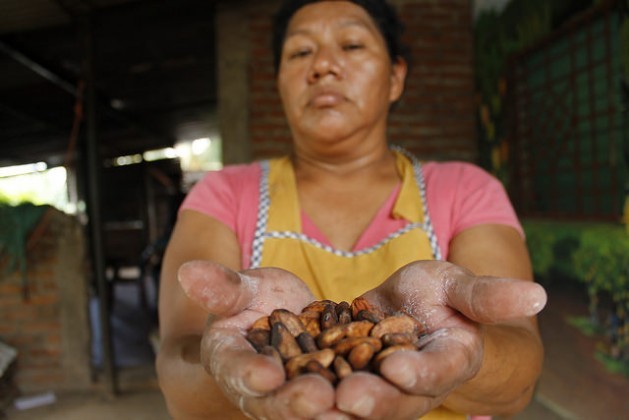 The hands of Idalia Ramón care for the cacao beans produced in the town of Caluco in western El Salvador. She and a group of women transform the beans into hand-made chocolate, in an ecological process that is taking off in this Central American country thanks to the national project Alianza Cacao, aimed at reviving the cultivation of cacao and improving the future of 10,000 small farming families. Credit: Edgardo Ayala/IPS

CALUCO/MERCEDES UMAÑA, El Salvador, Aug 20 2015 (IPS) - Idalia Ramón and 10 other rural Salvadoran women take portions of the freshly ground chocolate paste, weigh it, and make chocolates in the shapes of stars, rectangles or bells before packaging them for sale.

“This is a completely new source of work for us, we didn’t know anything about cacao or chocolate,” Ramón tells IPS. Before this, the 38-year-old widow was barely able to support her three children – ages 11, 13 and 15 – selling corn tortillas, a staple of the Central American and Mexican diet.

She is one of the women taking part in chocolate production in Caluco, a town of 10,000 in the department or province of Sonsonate in western El Salvador, in the context of a project that forms part of a national effort to revive cacao production.

“Now I have extra income; we can see the advantages that cacao brings to our communities,” she said.

“On one hand this is about reviving the age-old cultivation of a product that is rooted in our culture, and on the other it’s about boosting economic and social development in our communities.” -- María de los Ángeles Escobar

She and the rest of the women work at what they call the “processing centre”, which they put a lot of work into setting up. Here they turn the cacao beans into hand-made organic chocolates.

Since December, the effort to revive cacao production has taken shape in the Alianza Cacao El Salvador cacao alliance, which has brought together cooperatives and farmers from different regions, including these women who have become experts in making artisan chocolate.

The paste that comes out of the grinder is given different shapes, most frequently round bars. Dissolved in boiling water, the chocolate is used to make one of El Salvador’s favorite beverages.

Over the next five years, the Alianza Cacao aims to generate incomes for 10,000 cacao growing families in 87 of the country’s 262 municipalities, with 10,000 hectares planted in the crop. The idea is to generate some 27,000 direct and indirect jobs.

“The project is helping us to overcome the difficult economic situation, and to increase our production, thus improving incomes,” another local farmer, 33-year-old María Alas, tells IPS as she deftly forms hand-made chocolates in different shapes.

The Alianza Cacao has received 25 million dollars – 20 million from the United States Agency for International Development (USAID) and the U.S.-based Howard G. Buffett Foundation, and the rest from local sources. 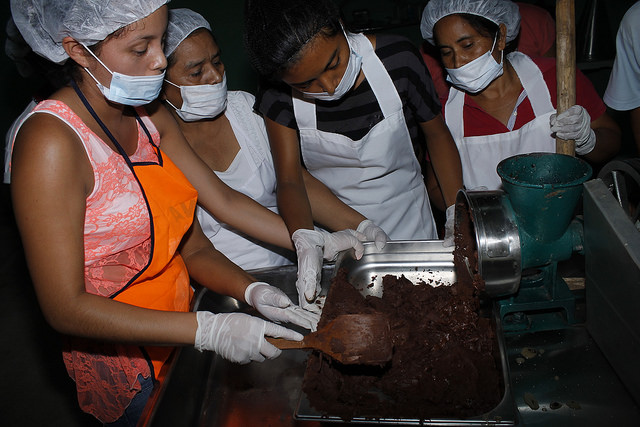 Four of the women who make chocolate in the community processing centre in Caluco, a town in western El Salvador, check the paste that comes out of the grinder before making organic chocolate bars and chocolates of different shapes. They are part of the Alianza Cacao project which is aimed at reviving the production of cacao, once a key element of this country’s history, culture and economy, but which was abandoned. Credit: Edgardo Ayala/IPS

In the pre-Columbian era, cacao beans were used as currency in Central America and southern Mexico, and later they were used to pay tribute to the Spanish crown.

Although cacao plantations practically disappeared in modern-day El Salvador due to pest and disease outbreaks, hot chocolate remained a popular traditional drink, and for that purpose cacao was imported from neighbouring Honduras and Nicaragua.

“On one hand this is about reviving the age-old cultivation of a product that is rooted in our culture, and on the other it’s about boosting economic and social development in our communities,” María de los Ángeles Escobar, director of the Casa de la Cultura or cultural centre in Caluco, told IPS.

The idea emerged as an alternative to mitigate the impact of coffee rust or roya, caused by the hemileia vastatrix fungus, which has affected 21 percent of coffee plants in the country, according to official estimates, and has reduced rural employment and incomes.

In El Salvador, 38 percent of the population of 6.2 million lives in rural areas. And according to the World Bank, 36 percent of rural inhabitants were living in poverty in 2013. This vulnerability was aggravated by the impact of coffee rust and the effects on corn and bean production of drought caused by El Niño – a cyclical climate phenomenon that affects weather patterns around the world – which has hurt 400,000 small farmers.

Caluco and four other municipalities in Sonsonate – areas in western El Salvador with a large indigenous presence – have joined the project: San Antonio del Monte, Nahuilingo, Izalco and Nahuizalco.

Farmers in the five municipalities – including the women interviewed in Caluco – set up the Asociación Cooperativa de Producción Agropecuaria Cacao Los Izalcos cacao cooperative, in order to join forces at each stage of the production chain. 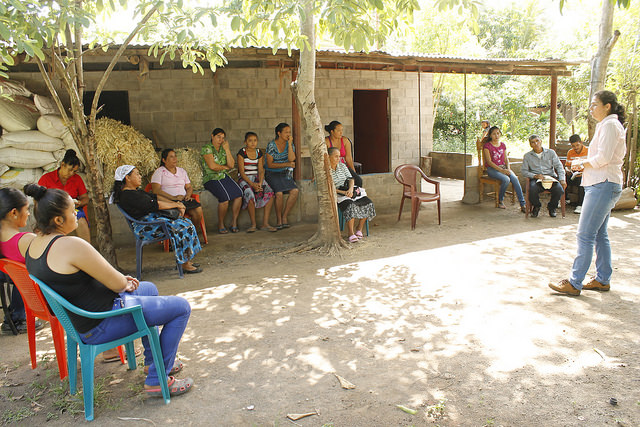 Cacao growers, mainly women, during a training session on how to make organic fertiliser to enrich the soil on their land in San Simón, a village in the municipality of Mercedes Umaña in the eastern Salvadoran department of Usulután. Credit: Edgardo Ayala/IPS

The cooperative has 111 hectares of cacao trees. Because they need shade to grow, the farmers plant them alongside fruit and timber trees.

In the first few months after it was formed, the Alianza Cacao focused on growing seedlings in nurseries that the members began to plant on their farms. The trees start to bear fruit when they are three or four years old.

But in Caluco local farmers are already making chocolate, because there were cacao producers in the municipality, who used locally-grown cacao along with imported beans to produce chocolate. In fact, Caluco was historically inhabited by Pilpil indigenous people, whose cacao was famous in colonial times.

“We hope that next year our production level will be higher; output today is low, because things are just getting started,” the vice president of the Asociación Cooperativa de Producción Agropecuaria Cacao Los Izalcos cooperative, Raquel Santos, tells IPS.

When the cooperative’s production peaks, it hopes to produce 500 kg a month of cacao, Artiga said.

Although for now the chocolate they produce is all hand-made, the members of the cooperative plan in the future to make chocolate bars on a more industrial scale. But that will depend on their initial success.

Since the cooperative was founded, the aim has been for women’s participation to be decisive in the local development of cacao production.

The Caluco Local Cacao Committee is made up of 29 male farmers and 25 women who process the beans and produce chocolate. They have a nursery and have built the first collection centre for locally produced cacao.

In the nursery, students from the local school are taught planting techniques and the importance of cacao in their history, culture and, now, economy. 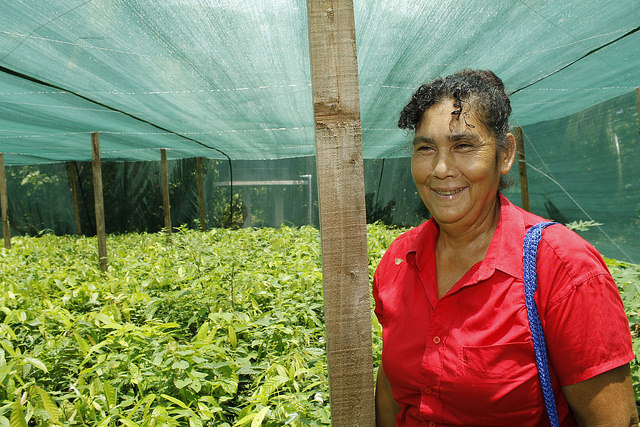 Miriam Bermúdez, one of the rural women who joined the project to grow cacao in San Simón, a village in the eastern Salvadoran municipality of Mercedes Umaña, outside the Vivero La Colmena, the nursery where the 25,000 cacao seedlings to be planted on 25 hectares belonging to the participants in the initiative are grown. Credit: Edgardo Ayala/IPS

On the other side of the country, in the eastern department of Usulután, 52-year-old Miriam Bermúdez is one of the most enthusiastic participants in the Vivero La Colmena community nursery project. She managed to convince other people in her home village, San Simón in the municipality of Mercedes Umaña, to join the Alianza Cacao.

“I used to drink chocolate without even knowing what tree it came from. But now I have learned a lot about the production process,” Bermúdez tells IPS during a break in the training that she and a group of men and women farmers are receiving about producing organic fertiliser.

The pesticide-free fertiliser will nourish the soil where the cacao trees are planted.

There are 25,000 seedlings in the nursery, enough to cover 25 hectares of land on local farms with cacao trees. The project also has an irrigation system, to avoid the effects of periodic drought.

While the seedlings grow big enough to plant, the farmers of Mercedes Umaña are deciding which fruit and timber trees to grow alongside the cacao trees for shade. These trees will also generate incomes, or already do so in some cases.

Bermúdez, on her .7 hectare-farm, has planted plantain and banana trees, as well as a variety of vegetables, to boost her food security.

“When the vegetable truck comes by I never buy anything because I get everything I need from my garden,” she says proudly.

Her 16-year-old granddaughter Esmeralda Bermúdez has decided to follow in her grandmother’s footsteps and participates actively in the different tasks involved in cacao production in her community.

“I really like learning new things, like preparing the soil or making organic compost,” she told IPS after the training session.

In Usulután, besides the municipality of Mercedes Umaña, cacao production has extended to the towns of Jiquilisco, San Dionisio, Jucuarán, Jucuapa, California, Alegría, Berlín and Nueva Granada. In each municipality there is a nursery of cacao tree seedlings run by 25 families.

That is another important component of the Alianza Cacao: the final product has to be high-quality and organic, because the goal is to promote sustainable development. Planting cacao trees is an ecological activity in and of itself, because it creates forests, when the cacao trees are full-grown.

“It’s very important for the farmers to know that their plantations can be managed ecologically, for the good of the environment, and also because the product fetches a better price,” Griselda Alvarenga, an adviser to the project, tells IPS.