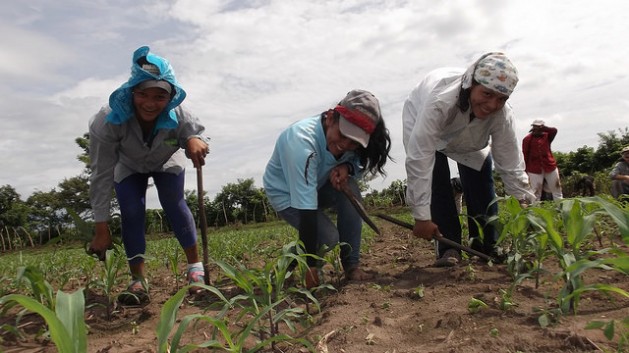 JIQUILISCO, El Salvador, Jul 5 2014 (IPS) - Under a searing sun, surrounded by a sea of young maize plants, Gladys Cortez expresses her fears that her employment in the cooperative that produces seed for the Salvadoran government may be at risk, if United States companies achieve participation in seed procurement.

“This is our source of income to support our children,” Cortez told IPS as she continued her regular farming tasks at the La Maroma cooperative, one of the seed producing establishments located in La Noria, in the municipality of Jiquilisco, in the eastern department of Usulután.

The U.S. government, through its ambassador in El Salvador, Mari Carmen Aponte, has set conditions on the delivery of a development aid package worth 277 million dollars from the Millennium Challenge Corporation, a U.S. foreign aid agency. It wants the country to open its seed procurement process to U.S. companies.

Aponte told local media that excluding U.S. companies violates the Free Trade Agreement between the United States and Central America- Dominican Republic (DR-CAFTA), which was signed by El Salvador in 2004.

Since 2011, the Salvadoran government has bought 88,000 quintals of maize seed annually from 18 producers, for distribution to 400,000 small farmers as part of its Family Agriculture Plan. Each farmer receives 10 kilos of improved seed and 45 kilos of fertilisers a year.

Among the 18 producers are the La Maroma cooperative and four others in the Bajo Lempa region, in the south of the department of Usulután.

These lands were divided up and distributed to ex-combatants of the former guerrilla organisation, now a political party, the Farabundo Martí National Liberation Front (FMLN) after the 1992 peace accords that put an end to 12 years of civil war that cost 75,000 lives.

The administration of President Salvador Sánchez Cerén, a former guerrilla commander who took office on Jun. 1, is maintaining links with the cooperatives, but has also indicated willingness to include international companies in the seed tendering process.

Certified seeds are varieties with higher yields and better resistance to adverse climate effects. They are produced by crossing genetic strains that have not been modified, in contrast to transgenic seeds. The cooperatives also produce some native seeds, on a smaller scale.

Seed quality is monitored and approved by the Salvadoran Ministry of Agriculture, which paid a total of 25.9 million dollars on seed purchases in 2013, most of them maize and beans which are staple foods in El Salvador.

Until the new model was implemented in 2011, 70 percent of the market was cornered by a subsidiary of U.S. biotech giant Monsanto, Semillas Cristiani Burkard. Since then, other producers have entered the field, like the cooperatives, with better quality certified seeds and more competitive prices.

Last year’s seed was purchased by an executive decree of December 2012, with the approval of Congress, and in practice U.S. companies were excluded. The U.S. embassy demanded a public and “transparent” tender process.

In January 2014, lawmakers approved a new decree allowing international companies to participate in the tendering process. However, the bidding in April was won by the same 18 producers.

Ambassador Aponte is now pressing for a different procurement process that will favour U.S. companies. This position is being criticised by social organisations and rural producers, who protested in front of the embassy in San Salvador in June.

“The embassy’s position serves to promote Monsanto’s seeds,” environmentalist Ricardo Navarro told IPS, referring to the world leader in transgenic seeds, against which many protests have been held in Latin American countries.

Aponte did not mention Monsanto in her comments, but according to Navarro “it is obvious she is referring to Monsanto, the largest company in the sector,” whose local branch “lost a market they thought belonged to them.”

The embassy did not grant an interview with economic adviser John Barrett, requested by IPS.

But in a press release on Wednesday Jul. 2 it expressed “satisfaction with the government’s expressed commitment to carry out future purchases of corn and bean seeds in a transparent competitive manner that respects both Salvadoran law and DR-CAFTA.”

As for Monsanto, it only sent IPS an e-mail signed by spokesman Tom Helscher, denying any part in the embassy’s campaign.

The discord has reached Washington. Sixteen members of Congress sent a letter Jul. 1 to Secretary of State John Kerry, expressing concern over the pressure exerted by the Office of the U.S. Trade Representative (USTR) in favour of the embassy campaign in San Salvador.

Nathan Weller, the head of EcoViva, a U.S. organisation that works on development projects in Bajo Lempa, told IPS that some U.S. companies have won contracts from the Salvadoran government, not through public tendering, but by direct purchasing or invitation.

Both methods are legal, but they lack the transparency that the embassy is calling for for seed procurement.

For example, in 2009 and 2010 Chevron Caribbean was awarded direct contracts for fuel supply, for 340,000 and 361,000 dollars respectively, according to the Ministry of Agriculture.

The company “offered products at a much higher price (than the competition), and yet USTR made no comment,” Weller complained.

Seeds of a better life

Growing seeds has also promoted employment in an area with a lot of poverty.

In rural areas, 43 percent of households live below the poverty line, compared to 29.9 percent of urban households, according to the 2013 annual survey by the Ministry of Economics.

“In addition to creating employment, we are demonstrating the productive potential of the local cooperatives,” campesino (small farmer) leader Juan Luna, the coordinator of the Asociación Mangle agricultural programme, told IPS.

Gladys Cortez, hard at work caring for young maize plants at the La Maroma cooperative, has work thanks to the seed programme.

“As well as the jobs, we are given seeds to grow to feed ourselves,” said Cortez, a 36-year-old single mother of a 17-year-old boy and a 13-year-old girl.

Alongside her, about 50 men and women worked in the maize fields of La Maroma. Most of them wore long-sleeved shirts and hats to protect them from sunburn, on the day IPS visited the cooperative. They are all paid five dollars a day.

In the Bajo Lempa area alone, about 15,000 campesinos are employed growing improved seeds, the cooperativists estimate. They have work for longer periods than on traditional plantations, because more care and attention is required.

“We don’t earn a great deal, but the fact of having an income is very positive for a single mother like me,” Cortez said.