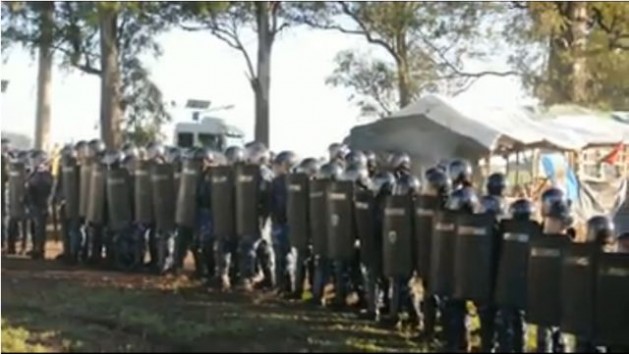 Troops at the entrance to the construction site where Monsanto is building a factory in Malvinas Argentinas. Credit: Screen capture from a video on the Acampe protesters’ Facebook page

MALVINAS ARGENTINAS, Córdoba, Argentina , Dec 2 2013 (IPS) - The people of this working-class suburb of Córdoba in Argentina’s central farming belt stoically put up with the spraying of the weed-killer glyphosate on the fields surrounding their neighbourhood. But the last straw was when U.S. biotech giant Monsanto showed up to build a seed plant.

The creator of glyphosate, whose trademark is Roundup, and one of the world’s leading producers of genetically modified seeds, Monsanto is building one of its biggest plants to process transgenic corn seed in Malvinas Argentinas, this poor community of 15,000 people 17 km east of the capital of the province of Córdoba.

The plant was to begin operating in March 2014. But construction work was brought to a halt in October by protests and legal action by local residents, who have been blocking the entrance to the site since Sept. 18.

On the morning of Saturday Nov. 30, troops arrived at the plant, as seen in this video posted on Facebook, and escorted several trucks out of the construction site. The trucks had forced their way past the roadblock on Thursday Nov. 28, when members of the construction union stormed into the camp set up by local residents, with the aim of breaking the blockade. More than 20 people were injured in the clash.

The protesters don’t like to describe themselves as environmentalists, and do not identify with any specific political party. Most of them are women.

In Malvinas Argentinas, one of the poorest districts in the province, everyone knows someone with respiratory problems or allergic reactions that coincide with the spraying of fields around Córdoba, one of the biggest producers of transgenic soy in this South American country, which is the world’s third largest producer of soy.

Doctors have also reported a rise in cases of cancer and birth defects.

But the final stroke was Monsanto’s plans for a local seed plant.

“I’m participating because I’m afraid of illness and death,” María Torres, a local resident, told Tierramérica*. “My son is already sick, and if Monsanto comes things will get worse,” she added, in the midst of a protest that this reporter accompanied in mid-November.

Her 13-year-old son was at home, with sinusitis and a nosebleed. “In Malvinas, a lot of people have the same symptoms,” she said. 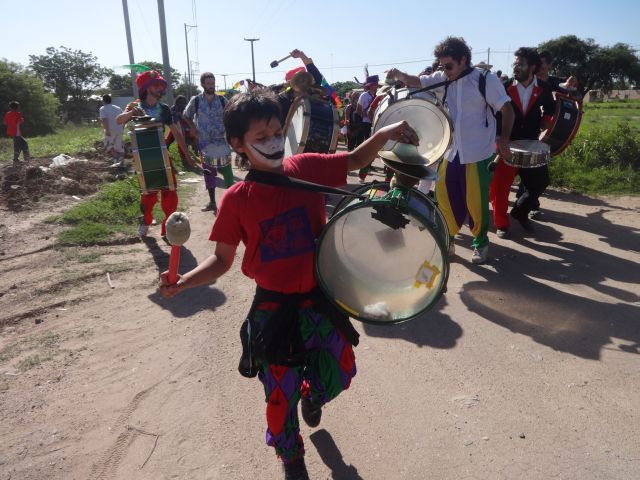 A boy taking part in the march from the Malvinas Argentinas central square to the construction site where Monsanto is trying to build a seed plant. Credit: Fabiana Frayssinet/IPS

Most of the spraying is done with Monsanto’s Roundup glyphosate-based weed-killer.
According to the University Network for Environment and Health – Physicians in Fumigated Towns, nearly 22 million hectares of soy, corn and other transgenic crops are sprayed in 12 of Argentina’s 23 provinces, whose towns are homes to some 12 million of the country’s nearly 42 million people.

Eli Leiria was also in the protest march. She is suffering from problems like weight loss. Doctors found glyphosate in her blood. “They say it’s as if a tornado had hit my body,” she said.

Biologist Raúl Montenegro of the National University of Córdoba, who won the Right Livelihood Award or Alternative Nobel Prize in 2004, explained to Tierramérica that there was no official monitoring of morbidity and mortality to determine whether the growing health problems observed by doctors are the effect of pesticides.

Nor are there adequate controls of pesticide levels in the blood, or environmental monitoring to detect traces in water tanks, for example, added Montenegro, president of the Environment Defence Foundation (FUNAM).

“That makes Argentina, and Brazil too, a paradise” for companies like Monsanto, he said.

The state agencies that authorise the use of pesticides base their decisions “mainly on technical reports and data from the companies themselves,” he said.

In 2009, Argentine President Cristina Fernández created the National Commission for Research on Agrochemicals, to study, prevent and treat their effects on human health and the environment.

But Argentina is also a “paradise” for transgenic crops, whose authorisation depends on “technical information mainly provided by the biotechnology corporations,” Montenegro said.

A plant that produces genetically modified seeds “is not a bread factory…they make poison,” said schoolteacher Matías Marizza of the Malvinas Assembly Fighting for Life.

Montenegro complained that the Córdoba Secretariat of the Environment authorised construction of the plant without taking into account studies by an independent interdisciplinary commission.

In the case of transgenic crops, there are “external pesticides,” like the ones that are sprayed on the fields, and pesticides “that come from inside the seeds,” such as the Cry1Ab protein in Monsanto’s MON810 GM maize, said Montenegro.

Each MON810 corn seed contains between 190 and 390 ng/g of the protein, whose impacts on health and biodiversity are not clear.

“In Canada it was found that pregnant and non-pregnant women had insecticide protein in their blood,” added the biologist, saying this runs counter to Monsanto’s claim that the proteins are degraded in the digestive tract.

According to a study by the University Network, the seeds to be processed by the plant in Malvinas Argentinas will be impregnated with substances such as propoxur, deltamethrin, pirimiphos ethyl, trifloxystrobin, ipconazole, metalaxyl and especially clothianidin, an insecticide banned by the European Union.

For now, the Monsanto plant construction site is blocked by five camps, where men and women – some there with their children – take turns keeping the trucks out.

Daniela Pérez, a mother of five, told Tierramérica that “this was a quiet town,” where people barely complained about problems like the lack of paved roads.

“Now what is at stake is the health of the children,” she said. “We feel so impotent…there is no one defending us.”

Soledad Escobar has four children who attend a school located next to the lot where the plant is being built.

“I’m worried about the silos and the chemical products they use,” she said. “Because of the changes in the climate, it’s now windy year-round in Córdoba and the school is right next door – I live across the street.”

Another protester, Beba Figueroa, said “What the TV and newspapers are saying, that there are political parties involved in this, isn’t true…most of us are mothers who are scared for our children.”

The demonstrators said many local residents were not taking part out of fear of losing their municipal jobs and the social assistance they receive from the government.

The protest that Tierramérica accompanied from the town square to the camps had a festive atmosphere, with colourful murga musical theatre groups, typical of the Argentine and Uruguayan carnival – a sharp contrast with the tension and violent clashes that would break out a few days later.

Like other people in this impoverished district, Matías Mansilla, his wife and their baby came out to the doorway of their humble home to watch the “carnival for life”. Mansilla didn’t take part, but he said he supports the cause “because of the illnesses that have appeared.”

A survey by two universities and the National Scientific and Technical Research Council (CONICET) found that 87 percent of respondents in Malvinas Argentinas wanted a plebiscite to be held, to let voters decide whether the Monsanto plant should be built, while 58 percent were opposed to the factory.

Neither the provincial government nor the company responded to Tierramérica’s request for an interview.

On its website, Monsanto claims it is committed to “sustainable agriculture.” A communiqué issued in September stated that the company had the “necessary permits” from the local authorities in Malvinas Argentinas for the construction of the plant, and that the environmental impact assessment was being studied by the provincial government.

Monsanto complained about “dirty campaigns that manipulate the technical data to generate fear…and lies, in the name of environmentalism…that mask spurious interests.”

In April, the provincial high court dismissed a request for protective measures, presented by local residents in an attempt to block construction of the plant.

In the last few months, the police have cracked down on the protesters on several occasions. The demonstrators have also received threats.

Malvinas Argentinas forms part of a growing global movement against Monsanto. The protests in this district have drawn up to 8,000 people, Marizza said. And it’s no wonder, he added: “The monster is right on top of us.”