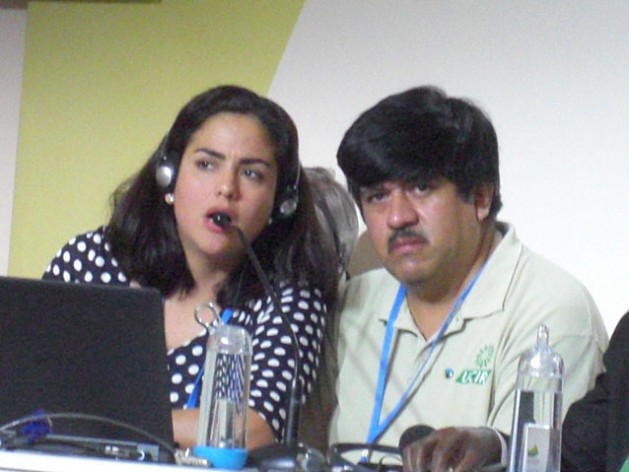 Luis Martinez, a representative of the Latin American and Caribbean smallholder farmers group CLAC, speaking through an interpreter at COP21 in Paris. Credit: A.D. McKenzie/IPS

PARIS, Dec 15 2015 (IPS) - As the festive season begins, some farmers say that consumers should be asking about the origins of their food, and thinking about who produces it, especially in light of the historic accord reached at the United Nations Climate Change Conference (COP 21) on Dec. 12 in Paris.

“Consumers need to think: what is behind my cup of coffee, behind my cup of chocolate … and is the price I’m paying giving enough to the producer,” said Luis Martinez, a representative of the Latin American and Caribbean smallholder farmers group CLAC who spoke on the sidelines of the conference hosted by France.

“There has to be an awareness process,” he added. “Consumers have a lot to say because the choices they make influence society, and when they buy a product, they give value to it.”

Martinez and a diverse group of farmers’ associations attended COP 21 to make sure that policy makers listened to the voices of farmers, particularly those most affected by climate change.

They appealed for action to help agricultural producers adapt to the effects of climate change and for support in reducing greenhouse gas emissions from the sector.

Delegates told stories of farmers abandoning their lands and moving to urban areas because they are unable to survive otherwise. They described extreme weather conditions that have caused damage to their crops, and they called attention to the spreading of diseases such as “coffee rust” that has diminished productivity in several Latin American countries.

Farmers attending the conference also acknowledged that their sector is part of the global climate-change problem, but many emphasized that a distinction had to be made between huge agricultural concerns and smallholder farming.

Agribusiness in general has been criticized for a range of unsustainable practices including monoculture plantations, deforestation, land grabbing for biofuel production, and the widespread use of chemical fertilizers, pesticides and hormones.

U.N. figures show that agriculture is directly responsible for 13.5 per cent of global greenhouse gas emissions (through methane from animal digestion and nitrous oxide from cultivation, including the use of synthetic fertilizers), and indirectly for another 17 per cent of emissions through deforestation or the clearing of land to feed and graze animals.

The sector thus cannot be ignored, and the Paris Agreement recognizes the “particular vulnerabilities of food production systems” to the adverse impacts of climate change.

It mentions the “fundamental priority of safeguarding food security and ending hunger” and indicates that the reduction of greenhouse gas emissions should occur in a way that does not “threaten food production.”

But it has generated both widespread praise and criticism, with world leaders calling the accord “historic” and “robust” while some civil society groups say it doesn’t go far enough even if it’s a step in the right direction.

Kumi Naidoo, Greenpeace International’s Executive Director, said, “The Paris Agreement is only one step on a long road, and there are parts of it that frustrate and disappoint me, but it is progress. This deal alone won’t dig us out the hole we’re in, but it makes the sides less steep.”

For the World Farmers’ Organisation (WFO) – an international body of agricultural producers – the agreement shows that farmers were heard, even if “everybody cannot be fully satisfied”, said Dr. Marco Manzano de Marinis, WFO’s Secretary General.

“We would have loved to have agriculture more mentioned and more directly involved in the different articles of the document adopted,” he told IPS. “However, food security and food production are there.”

He said it was essential that governments had considered the importance of producing food alongside the need to combat climate change. “Without food, there is no social stability,” he said, mentioning recent upheavals such as the Arab Spring that have been linked to food insecurity.

Like other groups, the WFO is now examining a range of future strategies, but some producers have already changed their practices. Jonjon Sarmiento, a Filipino farmer and representative of the Asian Farmers Association, told IPS that the agricultural sector should “work harder” on developing ecological and sustainable methods.

“We have two choices: we can continue with unsustainable chemical farming, or go to agro-ecological farming,” he said, referring to practices that focus on sustainability, productivity and stability, and may include organic and diversified farming that he and associates have employed.

Organisations such as the international NGO ActionAid have highlighted what they say are the benefits of “agroecology”, stressing that the various techniques involved can help to build up healthy soils and help crops to cope with unpredictable weather such as too much rainfall.

The WFO’s Marzano de Marinis says that such techniques must take into account that farming is not just a “humanitarian” activity, but that “food production is a profession like others, it’s employment”, and has to be recognized as such.

“Before agroecology, we still have to recognize a proper position for farmers,” he said. “Farmers cannot just be treated as food dispensers to solve problems here and there on the planet. They have to have equitable treatment in international agreements such as COP 21.”

He said the WFO hoped farmers would be assisted through the funding established by the Paris Agreement, which is ratcheting up climate finance to 100 billion dollars by 2020 to support developing nations in adapting to climate change.

“This is very important because we can have a wonderful agreement, we can celebrate a fantastic conference, but at the end of the story, if you don’t put enough resources … those agreements will just remain pieces of paper,” he added.

Martinez of CLAC meanwhile said that farmers wanted to “develop and defend their own means of adapting to climate change,” but with support from wealthy countries and from the consumer.

“There has to be a dialogue between farmers, consumers, policy makers and all stakeholders,” he said.