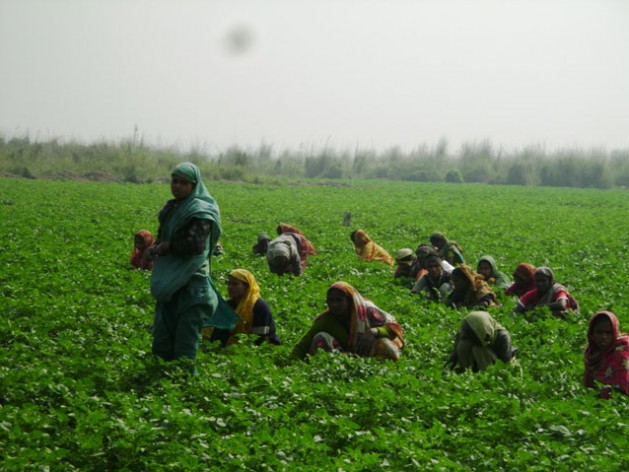 DHAKA, Bangladesh, Dec 31 2015 (IPS) - Expected climate change makes improving agricultural practices even more important than many already suggest, according to a new study of Bangladesh, considered one of the most at-risk nations from rising temperatures.

Moreover, climate vagaries may mean that the popular prescription of diversifying farming products will not provide the clear economic benefit that is currently anticipated.

The new study of a southwestern coastal zone that is home to 14 million, an impressive joint effort by 15 scientists in Bangladesh and the UK, is a landmark of sorts for factoring in local demographic variables, poverty and credit availability along with agricultural yields to assess prospects over coming decades.

Among its remarkable findings are that landless people – around half the population in the study area – may fare better than those with larger holdings, as they will not have to shoulder the investments needed to adjust farming practices and stand to benefit from rising relative labour income. Unfortunately, the model also finds that all farmers stand to become steadily poorer if economic conditions – particularly regarding the availability of loans – do not change.

The study, led by Atilla N. Lázár of the University of Southampton with the help of Abdur Razzaque Akanda of the Bangladesh Agriculture Research Institute in Joydebpur and more than a dozen others, is the latest to offer new insights into what climate change will mean. Earlier this month a US study looked more closely at the environmental impacts of various foods and found that the inefficiency of meat was greatly exaggerated unless it was assumed that consumers sharply drop their calorie intake. In fact, a calorie of lettuce produces three times more greenhouse gas emissions than a calorie of bacon, according to Paul Fischbeck, the Carnegie Mellon professor who led that study.

While the world applauds the Paris Climate Summit agreement and the international recognition that human-caused climate change is a major challenge of the century, much remains to be learned.

Fortunately, even where knowledge has yet to be produced, the tools to obtain it exist. The Bangladesh study relies crucially on the UN Food and Agriculture Organisation’s (FAO) CLIMWAT data base and FAO’s CROPWAT model for projecting farm yields.

CROPWAT, developed and updated over many years by FAO’s technical land and water experts, is a “decision-support system,” meaning that variables can be adjusted to simulate the future. CLIMWAT allows the calculation of crop water and irrigation requirements, allowing for planning and scheduling for a range of different global climates.

Both are unsung but emblematic examples of global public goods – they were produced by the international community for use by all, and their value does not decrease when more people use them. FAO Director-General Jose Graziano da Silva, along with the heads of the World Bank and the United Nations, have emphasized the growing importance of providing global public goods. Both CROPWAT and CLIMWAT applications can be downloaded for free, although some expertise is needed to use them.

The Bangladesh study reached some intriguing conclusions by using the model in an innovative way, adding in localized social factors related to wealth, prices, urban migration patterns and access to loans on top of projected hotter temperatures, salinized soils and higher carbon dioxide levels in the atmosphere.

One of the first things to note, which is known but rarely remembered, is that higher carbon dioxide levels will improve crop productivity in Bangladesh, by up to 10 per cent in relatively short order, although the CROPWAT model also signals that may be offset by inferior nutritional qualities. This, however, will not make farmers richer, and they stand to endure more months per year with low calorie intakes, which they can offset only by taking on more off-farm jobs, loans and running down their savings.

One reason is that while productivity may naturally increase, so does variability, which translates into higher risks of shortfalls and the need for loans. Loans available in the area range from official loans from the Bangladesh Rural Development Board, typically to farmers, which charge 11 per cent interest a year, to private money lenders who charge 120 per cent a year in interest.

Another finding of the study is that when farm input costs such as fertilizer are included, and greenhouse gas emissions taken into consideration, just what ideally should be grown may need to change. For example, potatoes use almost four times the fertilizer by weight per hectare as rice. So the “progressive” farming model that has gained ground in the region – whereby farmers grow higher-value cash crops including chilli, mustard, tomato and wheat – may increase national agriculture’s contribution to global carbon dioxide emissions than traditional rice farming.

On top of that, the lucrative cash crops – such as the mangoes that FAO has helped local farmers send to UK supermarkets – are more sensitive to seasonal conditions, so while the “progressive” farm model is a boon for rural incomes, it is less predictable. This is one reason why the poorest households, being more risk averse especially in the absence of available credit and social protection programmes, prefer to grow staple crops. They earn less but they also invest less and run lower risk.

A policy intervention to improve people’s productivity options appears not only warranted but needed. When the scholars ran a simulation test over the next 60 years, they found that no form of agriculture could generate enough profit to pay back all the loans needed to survive while farming. Much care will be needed in crafting the right policy to make sure that extending access to credit doesn’t just ensnare more people in poverty.

Migration to cities is obviously a potential alternative. That, however, will require more crops to be grown for market and transport rather than self-sufficient household consumption. The one upside is that, eventually – after 2035 according to the model – rural labour costs would also rise in such a scenario, although not enough to offset hardship.

Lázár and colleagues emphasize that their work using CROPWAT in an integrated manner is still preliminary. But already the findings point at some of the surprising shifts the world will have to make in an era of climate change and the global Sustainable Development Agenda’s pledge to eradicate hunger and poverty by 2030.