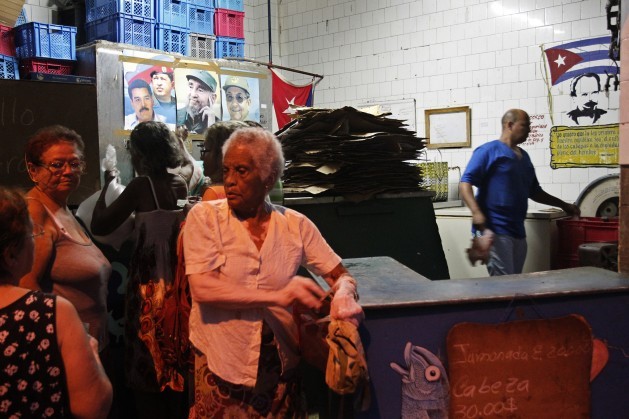 A group of women wait their turn to buy rationed food that is sold at subsidised prices, at a government shop in Havana, Cuba on Nov. 21, 2015. Credit: Jorge Luis Baños/IPS

HAVANA, Dec 16 2015 (IPS) - While the normalisation of diplomatic relations between the United States and Cuba is moving ahead, and the U.S. and Cuban flags have been proudly waving in Havana and Washington, respectively, since last July, the year gone by since the thaw has left many unanswered questions.

“You shouldn’t ask me, because in my view, nothing has changed,” one slightly angry middle-aged man told IPS while waiting his turn in a barbershop. In a nearby farmers’ market, a woman asked, loudly so that everyone could hear, why a pound of tomatoes cost 25 pesos (nearly a dollar).

Many Cubans feel that they don’t have much to celebrate this Dec. 17, the first anniversary of the day Presidents Raúl Castro of Cuba and Barack Obama of the United States took the world by surprise with their decision to reestablish diplomatic relations, severed in January 1961.

People who got excited about the idea that their daily lives would begin to improve after more than half a century of hostile relations are ending the year with public sector salaries that do not even cover their basic food needs.

The Cuban press reported that Marino Murillo, minister of economy and planning and vice president of the Council of Ministers, admitted at a recent session of the provincial legislature of Havana that the overall economic indicators in the capital had improved, but that this has not yet been reflected in the day-to-day lives of local residents.

The thaw has, however, had a positive impact on tourism, by giving a boost to emerging private enterprises like room rentals and small restaurants, options chosen by many visitors interested in getting to know Cuban society up close.

According to official statistics, in the first half of 2015 this country of 11.2 million people was visited by 1,923,326 people, compared to 1,660,110 in the first half of 2014. Visitors from other parts of Latin America can be frequently heard saying that they wanted to come to Cuba before the “invasion” of tourists from the U.S.

People from the United States can only travel to Cuba with special permits, for religious, cultural, journalistic or educational purposes, or for “people-to-people” contacts. Experts project that 145,000 people from the U.S. will have visited the country this year – 50,000 more than in 2014. 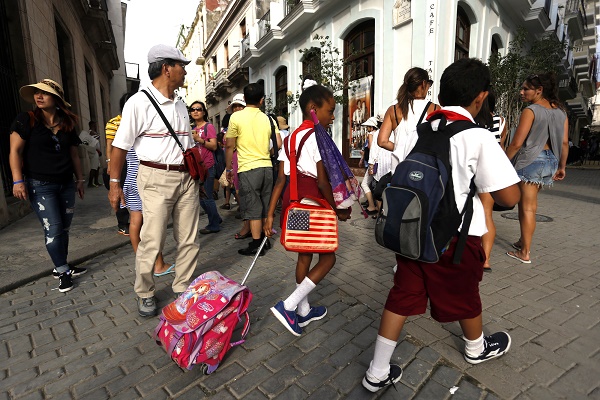 The ban on travel to Cuba for the purpose of tourism and the embargo that Washington has had in place against this socialist country since 1962 are among the pending issues to resolve in the process of normalisation of ties promoted over the last year by official visitors to Cuba who have included Secretary of State John Kerry, two other members of Obama’s cabinet, and three state governors.

“Beyond a number of grandiloquent headlines, everything remains to be done,” Cuban journalist and academic Salvador Salazar, who is earning a PhD in Mexico, told IPS. In his view, only the first few steps have been taken towards “what should be a civilised relationship marked by talking instead of shouting, and debating instead of attacking.”

Sarah Stephens, executive director of the Washington-based Center for Democracy in the Americas, concurred that after 55 years of hostile and dangerous relations, the governments of the two countries are learning how to respect each other.

“…[I]f 2015 was about both governments learning to treat each other with dignity and respect, 2016 has to be about building on that progress and using diplomacy to create lasting benefits for both countries in order to make the changes we are seeing irreversible and the further changes we want inevitable,” she told IPS by email.

In September, a binational commission created after the official restoration of diplomatic relations and the reopening of embassies defined the issues for starting talks aimed at clearing the path towards normalisation, including communications, drug trafficking, health, civil aviation and maritime security.

Human rights, human trafficking and demands for compensation by both sides were other questions on the agendas outlined by the delegations from the two countries. The list also includes immigration, an issue that has been discussed for years in periodic talks held to review progress on agreements signed in 1994 and 1995.

The talks about the agreements aimed at ensuring “safe, legal and orderly” immigration are not free of tension, given the Cuban government’s frustrated demand for the repeal of the U.S. Cuban Adjustment Act’s “wet foot, dry foot” policy and other regulations that according to authorities here encourage illegal migration.

Washington has reiterated that it will not modify its immigration policy towards Cuba. The anniversary of the start of the thaw finds some 5,000 Cuban immigrants stranded at border crossings in Costa Rica without any apparent solution, in their quest to reach the United States by means of a route that takes them through Central America and Mexico.

John Gronbeck-Tedesco, assistant professor of American Studies at Ramapo College in New Jersey, believes the Obama administration is doing its part to clear the way towards reconciliation, and says the talks held so far have calmed the “anti-normalisation rhetoric.”

But the academic says he does not yet see a climate favourable to the lifting of the embargo, which can only be done by the U.S. Congress, “especially” given the fact that 2016 is an election year.

According to the Cuban government, the embargo has hindered this country’s development and has caused 121.192 billion dollars in damages over the past five decades.

“I think that before Congress takes up the matter, however, the significant issue of debts still owed will need to be settled more clearly,” added the analyst, referring to the question of compensation that the two countries began to discuss in a Dec. 8 “informational” session in Havana.

“The U.S. has a price for Cuban American property and investments lost (nationalised) due to the revolution, and Cuba has a number in mind regarding the economic harm caused by the embargo. These debts are as politically symbolic as they are materially real for both interested parties,” added Gronbeck-Tedesco, without mentioning specific figures.

In an interview with the press published Monday Dec. 14, Obama reiterated his interest in visiting Cuba, although only if “I get to talk to everybody”.

He said that in his conversations with Castro he has made it clear that “we would continue to reach out to those who want to broaden the scope for, you know, free expression inside of Cuba.”

The two leaders have spoken by phone at least twice and met in person for the first time on Apr. 11, at the seventh Summit of the Americas in Panama. And on Sep. 29 in New York they held the first official meeting between the presidents of the two countries since the 1959 Cuban revolution.

*With reporting by Ivet González in Havana.